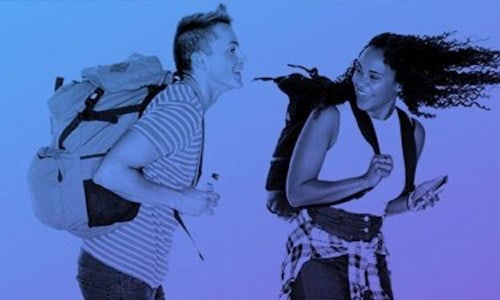 “Dare To Travel” | A Travel Show Designed for the Digital Generation

In an era of ever more pervasive media fragmentation and ad blocking, it's harder and harder for brands to connect with young people through traditional advertising outlets. As such, brands are increasingly finding that the best way to market their products is to create entertainment that consumers actively seek out. This is particularly true when marketing to Gen Z, a consumer group who grew up with the Internet, and who not only demand that brands entertain them but that entertainment mutate to engage with them as a friend would. For some brands, behaving like a "friend" is a natural extension of their identity; for others, entering into native consumer communities can make them seem inauthentic, ultimately causing potential consumers to disinvite these brands from participating in their community. Our challenge was to position AT&T, a 131-year-old company with whom most young people had limited if any direct interaction, as a part of their community, driving brand relevancy and, ultimately preference.

Our response to this challenge was to create a new kind of entertainment for our Gen Z and Millennial target audiences that that was authentic and had a natural white space for AT&T's brand. We aimed to create shows designed specifically for the social media platforms from which young people were increasingly getting their micro-dose entertainment—bringing the audience closer to their favorite influencer via AT&T. Ultimately, each show would create a fan community whose members engaged passionately with each other, the series, and the influencer—all with AT&T positioned front and center.

Mobile phones have redefined how Millennials travel. Young people are no longer carrying around guidebooks or creating intricate itineraries. Instead, they are showing up at a chosen location and letting their mobile phones be their guides, using everything from Instagram to Hotel Tonight to figure out where they should go and what they should do. Tapping into this truth, we wanted to create a travel show for this connected generation that highlighted the pivotal role of AT&T in meeting all their wanderlust needs. We teamed up with YouTube travel vloggers Damon and Jo to create a multi-platform show called "Dare to Travel."

The show functioned as a real-time game that Damon and Jo played alongside their fans as they traveled across the US and Mexico. In each episode, the duo completed dares chosen at random from a deck of Travel Dare cards designed so that they could be completed anywhere—all you needed was a mobile phone and some guts. Fans were encouraged to "Dare To Travel"—via Snapchat, Twitter, and Instagram—completing the same challenges as the influencers, wherever they might be. Because Damon and Jo are travel pros, every YouTube episode not only showed viewers amazing places to explore but travel hacks they could use anywhere. Truly an example of "friendertainment," "Dare to Travel" created a bi-directional conversation, between audience and influencers and, even more vitally, between audience and brand. This one-to-one engagement encouraged fans to participate and brought AT&T directly into their community.

And the fan participation didn't stop with the final episode. We mailed out over 500 Travel Dare card decks to Damon and Jo's fans to keep the wanderlust alive. From Chicago to Los Angeles to Beijing, fans from all over the world wanted to experience their own cities from a new perspective, and Damon and Jo, with the help of AT&T, made this dream a reality. Fans excitedly turned to social media when their tins of cards arrived in the mail—broadcasting their plans to challenge themselves to break out of their comfort zone. Whether they had to tweet in emojis about the city that they were visiting or find a way to travel without wheels, fans were eager to live the travel lifestyle of their favorite influencers, Damon and Jo.

"Dare To Travel" built a community of wanderlust-ful Millennials and Gen Zs, not only online but in real life as well. In this collaboration with AT&T, Damon and Jo taught their fans that the world is what you make it, and with a daring attitude and an open mind, every corner turned can lead to a new adventure.

Adventure-seeking fans across the country played along to "Dare to Travel," garnering the show more than 8.3M views and 65M total exposures. But these fans were not just idly watching. We had fans posting their own versions of the dares. Wearing neon wigs, playing social-media scavenger hunts, and sharing their experiences exploring their native cities, these viewers generated more than 511K engagements over the course of series. Followers of Damon and Jo's channel continue to comment on how much they loved the series, but the show actually attracted a new audience to the pair's online fan base as well. Their channel's subscriber count more than doubled—to over 575,000 subscribers from 212,700 at launch.

The show was truly loved by fans and when the series wrapped—with a giant sloppy kiss from a camel in Mexico—they admonished us for letting it end. Viewers like Nicole Richardson wrote, "I can't believe this is over. If anyone out there has any common sense at all, they will make this a more permanent show!! You guys gave us something that not only entertains us, but also inspires us." 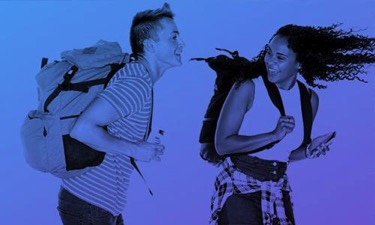