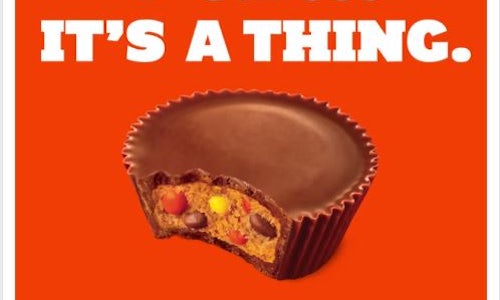 Reese's Pieces Peanut Butter Cups were scheduled for a new product launch in Summer 2016. The mashup of two popular candies—Reese's Pieces candy stuffed inside a Reese's Peanut Butter Cup—could be counted on to generate interest from devoted brand fans and trade press, but no advanced drumbeats activated, no PR activities were planned.

Then confusion hit. A photo of the unreleased product was leaked on a personal Facebook account without the brand's knowledge or permission and suddenly Reese's Pieces Peanut Butter Cups were a hot topic on social media. People wanted to know if the whimsical-looking confection was real or fantasy. And if real, where could they get them?

The product wouldn't be on shelves for months. The leaked photo now had nearly 40,000 shares, and social media speculation had upstaged the planned launch. How could the brand take back control of its own product?

But maybe the confusion had created opportunity. Working with Reese's brand, the PR team closely monitored the unexpected brand conversation that was surging online. Speculation was heightening interest among the brand's biggest fans, a huge asset for driving sell-in of the product to retailers. Instead of shutting down speculation and resetting to the scheduled launch date, why not fuel more speculation? Why not have a little fun by adding to the confusion?

It would have been simple to issue an official confirmation and call it a day. But we recognized a unique opportunity to play up Reese's witty brand personality, while connecting and engaging with its most devoted consumers. And so #Cupfusion was born.

#Cupfusion played off two concepts: the confusion of consumers who didn't know if the product was real or fantasy; and the fusion of two of Reese's most beloved and iconic products, Reese's Peanut Butter Cups and Reese's Pieces candy. We would tease social media with branded memes and messages that fell just short of official pronouncements, feeding a fresh wave of speculation and sharing. The campaign would enlist an emoji-inspired graphic—Cupmoji—as its main asset, and most importantly, would maintain constant social listening and analysis to determine how far to push the prank.

And when it came time to come clean about the rumors, the unexpected social media phenomenon would require an unconventional social media press conference.

With a core team of internal experts and external agency partners, we launched the #Cupfusion campaign within hours. The brand began posting a series of cryptic images and GIFs on its Facebook and Twitter channels that neither confirmed nor denied the new product. Instead, the branded content playfully bantered with its fans to keep the conversation—and confusion—going.

A quick glance at the calendar gave us two openings to play with. We quickly created a Cinco de Mayo meme of a Reese's Peanut Butter Cup piñata filled with Reese's Pieces candy, and a Mother's Day GIF of a Reese's Peanut Butter Cup telling its Reese's Pieces candy, "You're so cute, I could eat you up!" We hinted that the cup was perhaps a dream. And pretended we didn't know where all our "Pieces" were disappearing to.

The #Cupfusion campaign was originally intended to last about two weeks before the brand would confirm the product. However, the integrated team was keeping a keen eye on the conversation, where Facebook fans and Twitter followers were now telling the Reese's brand not to be such a #cuptease. It was time to pivot and fess up.

The #Cupfusion ended with an official announcement in an unlikely venue. Our Facebook "press conference" invited consumers and top-tier media to tune in to the big news delivered in an irreverent GIF: "Yup….it's a thing." Within minutes, comments and questions from fans flooded the comments section. And within hours, the team launched a real-time social campaign on its Facebook and Twitter feeds, continuing the cheeky back-and-forth between the brand and its fans.

Just as with the original leaked photo, news of the confirmation went viral. The official announcement post on Facebook received nearly 750,000 views in less than 24 hours—topping out at 1.3M views. And media took notice. Within a few days, the news reached more than 1.1 billion people through online news stories and in national and local broadcast segments. The online conversation generated 43 million social impressions and 2.2 million engagements.

And the playful confusion led to real business results. In the weeks following the PR blitz, retailers inundated The Hershey Company sales team with calls asking how soon they could receive the now infamous Reese's Pieces Peanut Butter Cups. Since the launch of #Cupfusion, volume expectations have increased more than 200 percent, far surpassing original projections. 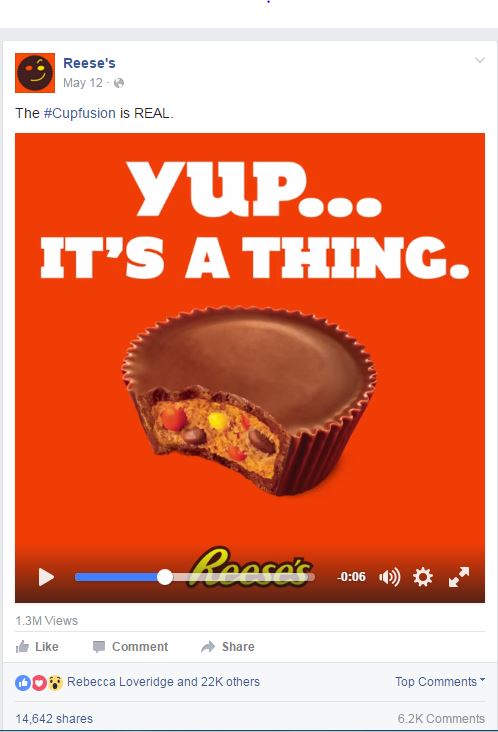 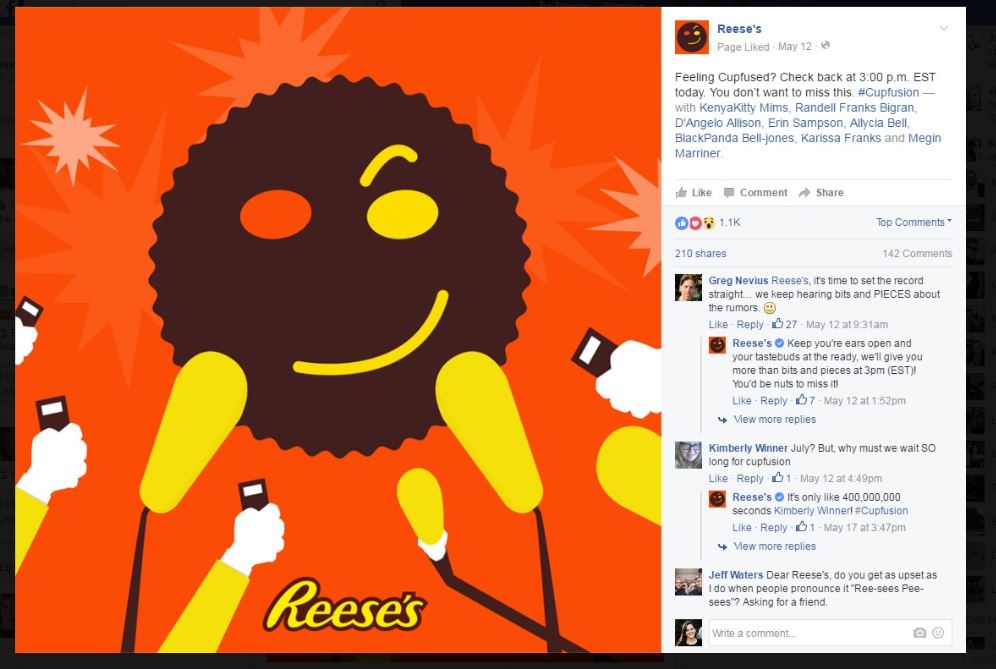