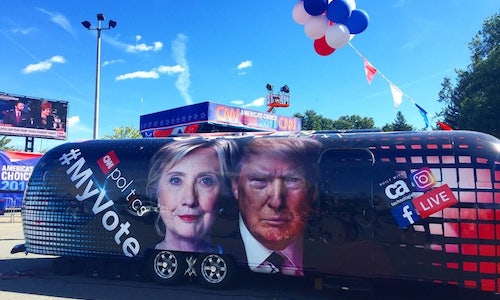 Wherever you were in 2016, no matter the app or platform, CNN was there—from the first Facebook Live by a news organization to choose-your-own-adventure explainers on Kik. It was an action plan mapped out over 24 months, leading to 24 hours of non-stop, wall-to-wall coverage.

We teamed up with photographer Nigel Parry to capture "moving portraits" of all 2016 Democratic and Republican candidates, which were created and shared exclusively on our Instagram account.

CNN pioneered the first Facebook Live of any organization in October 2015, from the Las Vegas debate. Dozens of talent across CNN joined to produce nearly 70 Lives over the two-week period. The conventions also marked the hard launch for CNN on Kik -- a US-centric messaging app with an average audience of 13-17 years.

Teaming up with CNNVR, our in-house virtual-reality team, we delivered Facebook users an exclusive virtual reality experience, bringing the user directly to the conventions.

A big part of our election goal was to reach the next generation of news consumers, and we did that by focusing on messaging apps like Snapchat, Kik and LINE.

One of the key highlights in our coverage during election season was securing the candidates for CNN Snapchat exclusive interviews, where candidates made their pitch to young voters on our Snapchat Discover channel.

CNN also went full-force on Snapchat Discover on Election Night to update readers with the latest vote count and news from polling places. Once there was a clear winner, we broke in again with a new tile: IT'S TRUMP.

On Election Day, more than 500,000 people tuned into a live chat with CNN Digital Politics on LINE.

On Election Day, we hosted 18 straight hours of Facebook Live, starting at 9 a.m. ET Tuesday morning and wrapping up 3 a.m. on Wednesday, totaling 39 Lives in total, with over 47.6 million Facebook Live views.

Working with correspondents, producers and CNN Air — the group that handles our drones — we broadcast live on Facebook from polling centers around the globe.

A lot of consumers saw CNN's election results on Twitter, Facebook, Instagram, Snapchat, LINE or Kik -- our primary platforms. But in New York City, all you had to do was look up.

In an unprecedented display, and through a lot of will and technology, CNN literally projected our key race calls on the side of the Empire State Building, seconds after they were made on air, and then streamed the view live on Facebook via three different cameras.

Twenty-five million views later, our Election Night Facebook Live was the biggest ever for CNN, and the 8th most popular Facebook Live in 2016.

In addition to Instagram, Facebook and Facebook Live projections, we were also live-tweeting key race alerts, updates and interactives on the road to 270. We reported over 150 real-time tweets, garnering over 300,000 interactions. 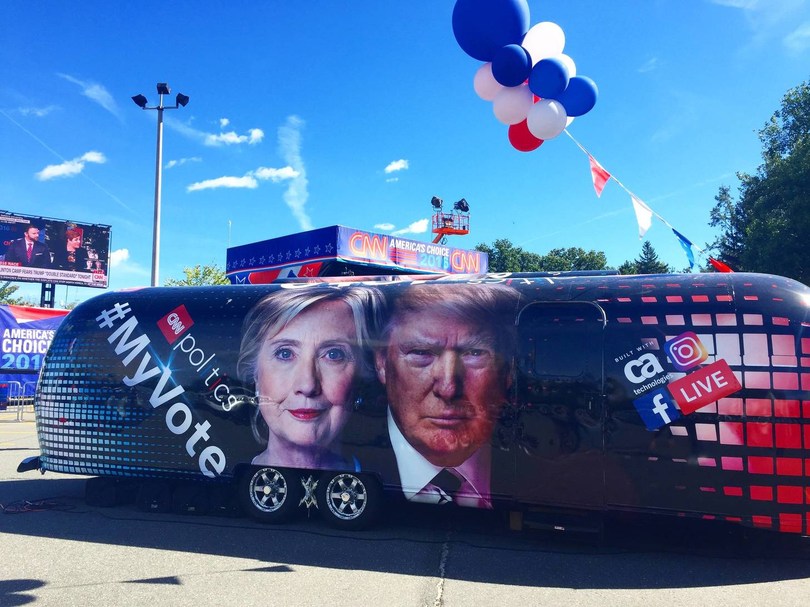