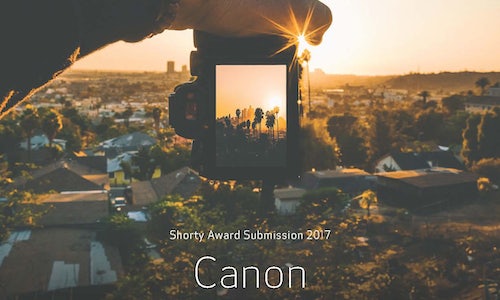 In 2016, Canon launched the EOS M5 Digital Camera, the latest venture into the mirrorless camera category. The goal was to gain market share within the category by leveraging Canon's brand equity and consumer affinity without negatively impacting Canon's DSLR business. Our challenge was to differentiate the EOS M5 from its competitors through its functional product benefits – high performance in a smaller, lighter form.

We aimed to develop a social media-driven campaign that would create a splash and cut through a highly cluttered media environment with a limited budget. Our target audiences were photo enthusiasts who see themselves as trendsetters and individuals who use photography to document what's going on in the world - two segments which prioritize connectivity and "coolness" more than other primary targets.

To measure success of the campaign, we set the following objectives:

During our research, we learned that photo enthusiasts often seek the perfect camera that enables creativity and is easy to use, which created a natural thread to our latest product and its core benefits. Instagram users love the immediacy of connecting with something they're passionate about. The Canon EOS M5 is the fastest, most efficient M-series camera yet that bridges consumers' love between accessibility and shareability, offering an immediate gratification that other cameras couldn't offer.

We strategically selected twelve influencers across a range of niche verticals that spoke to our target consumers on Instagram (e.g. Fashion, Culture, Travel, Food, Arts) to participate in the #TagYoureIt Instagram campaign, which was the first of its kind. The niche verticals were linked through a passion for one thing – photography. Photography enabled members of each category to showcase their passion to their fans and followers.

Canon's EOS M5 #TagYoureIt collaborative social content series was the ultimate game of Instagram-Tag. It demonstrated that this lightweight, fast camera allows users to reach their creative potential by giving them the freedom to act on impulse. A hyper-targeted group of influencers of various genres challenged one another to put the EOS M5 (and themselves!) through its paces. Each of our influencers tagged one another in a pre-determined order with a niche photo challenge. Influencers had just 24-hours to respond with an appropriate image that disrupted their feed while inspiring fans to engage.

Canon USA kicked off the process by posting an image on Instagram and tagging the first influencer (Jamie Chung) with a photo challenge in the fashion category. Jamie then had 24-hours to respond with a post that met her customized brief. She continued the chain by tagging @NewForkCity with a food challenge. This ultimately created a digital game of 'telephone' that resulted in gorgeous, inspiring and disruptive content – all captured on the Canon EOS M5.

We secured public relations assets through our negotiations and utilized the influencers for select interviews tied to their respective challenges and the camera benefits. We also developed photo tips associated with the influencers' appropriate category and pitched those out for additional earned media.

Following each influencer's photo challenge response, subsequent posts included a call-to-action for fans to answer a similar challenge and fan photo selections were either re-posted or re-created on the influencers' Instagram profiles. The influencers' final post was on behalf of the Canon EOS M5 #TagYoureIt photo challenge to garner awareness for the initiative and the product. Using extremely limited paid media support behind select #TagYoureIt images, the campaign was also able to extend beyond the influencers' followers reaching additional fans of photography.

Following the completion of the #TagYoureIt social media campaign, we used our initial objectives to determine if our goals and KPIs had been met.

● Based on previous evaluations ahead of the launch, we exceeded 58% of influencer's previous average sponsored engagement rate

Following the program's success, we have now begun to expand our partnerships with select influencer's for licensing deals for online banners, as well as in-store retail appearances throughout the 2017 calendar year highlighting the Canon EOS M5 benefits. 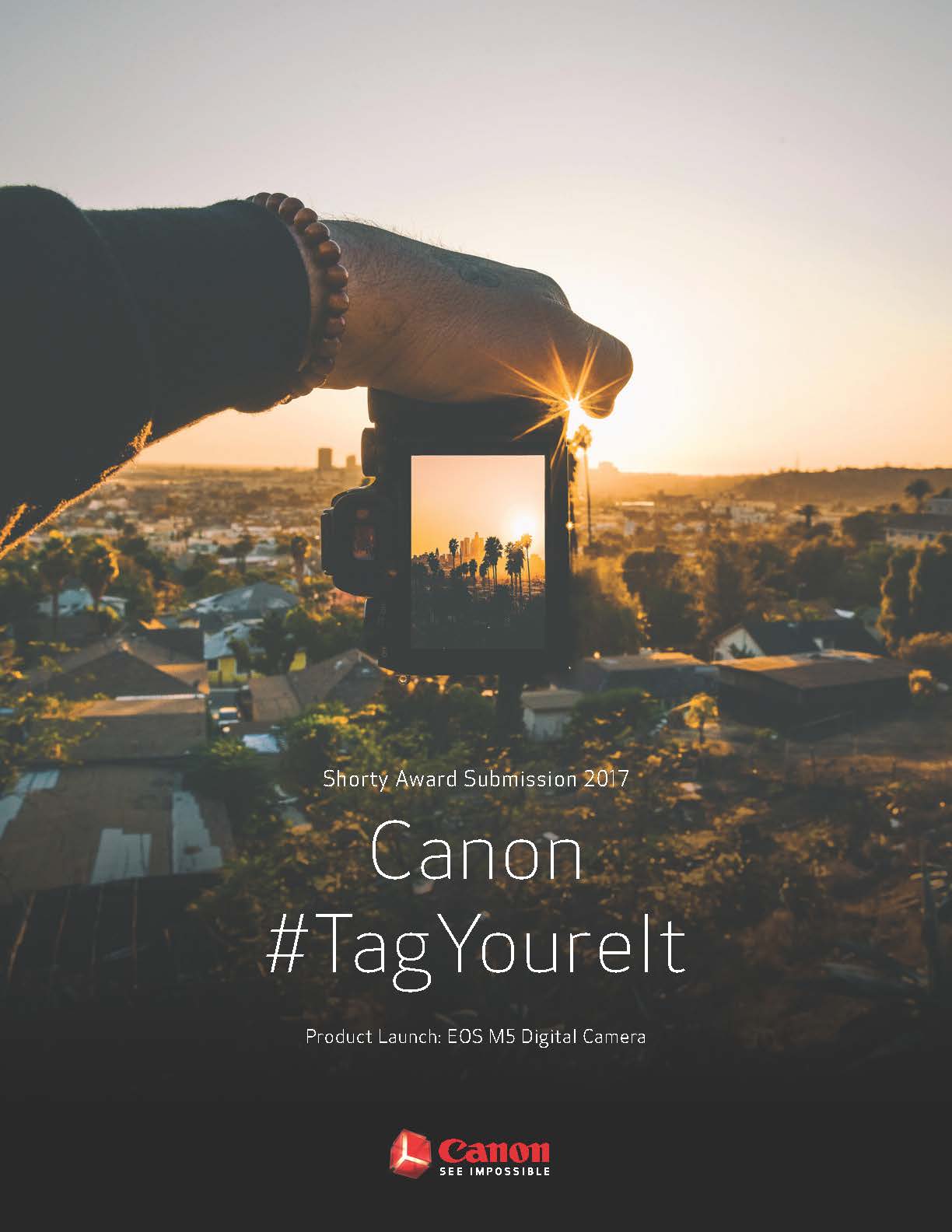 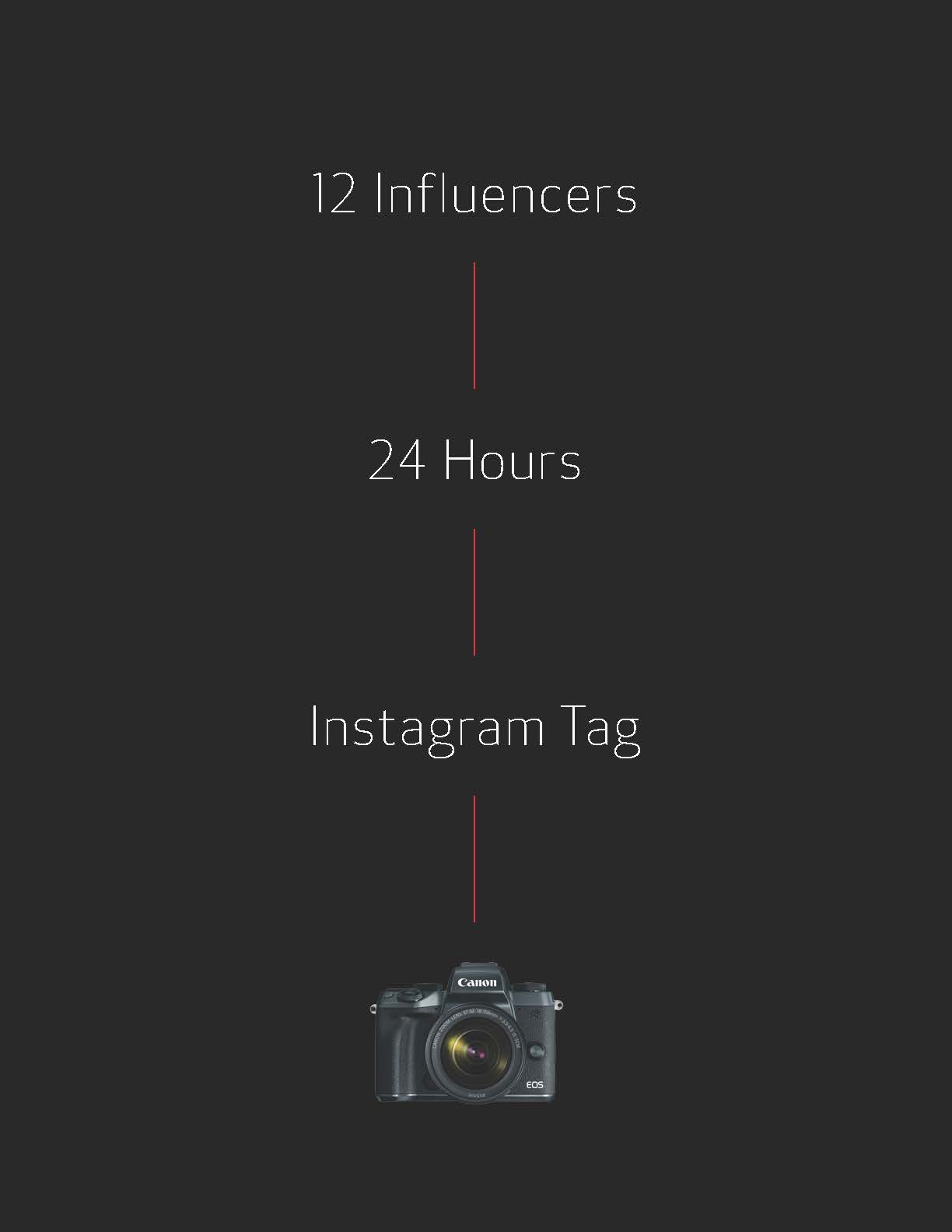 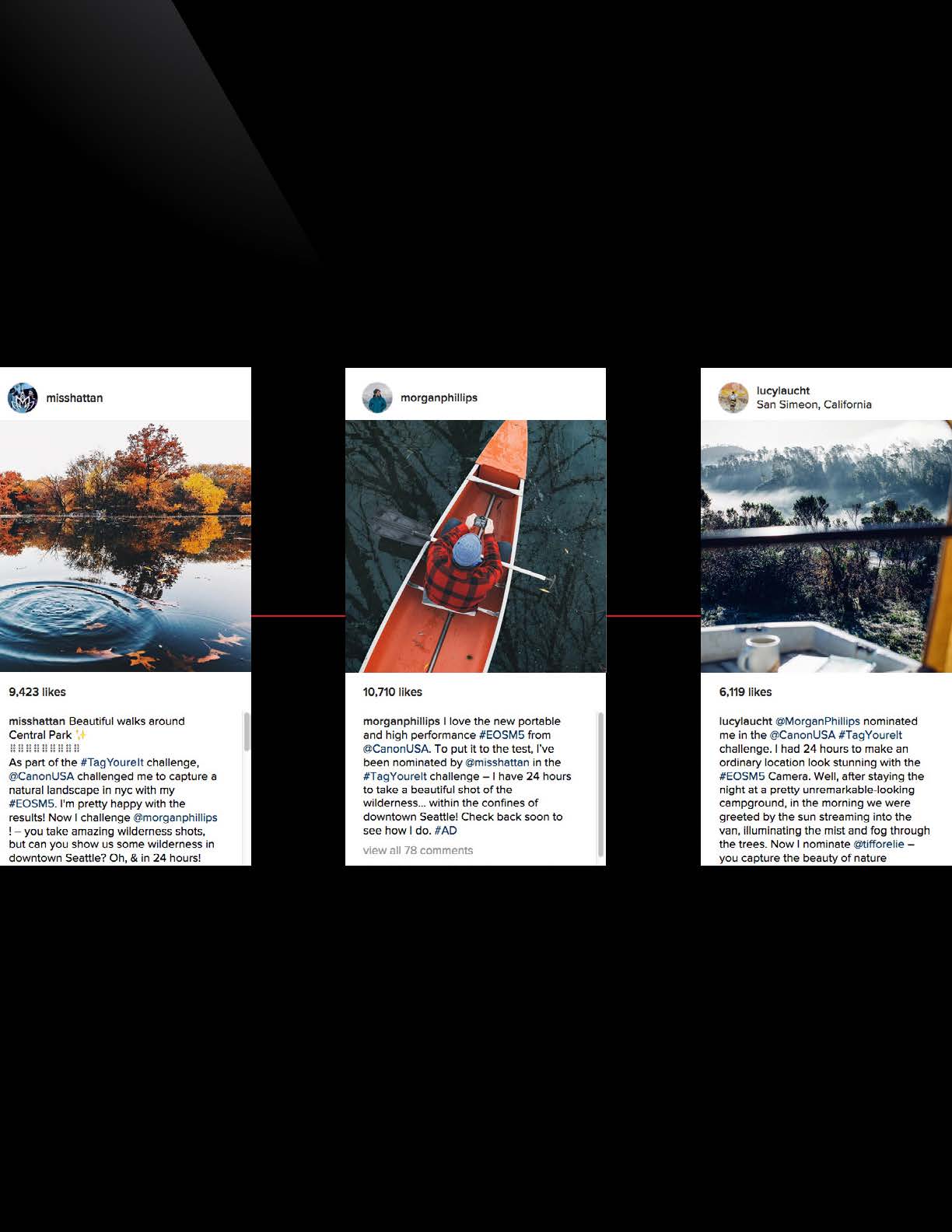 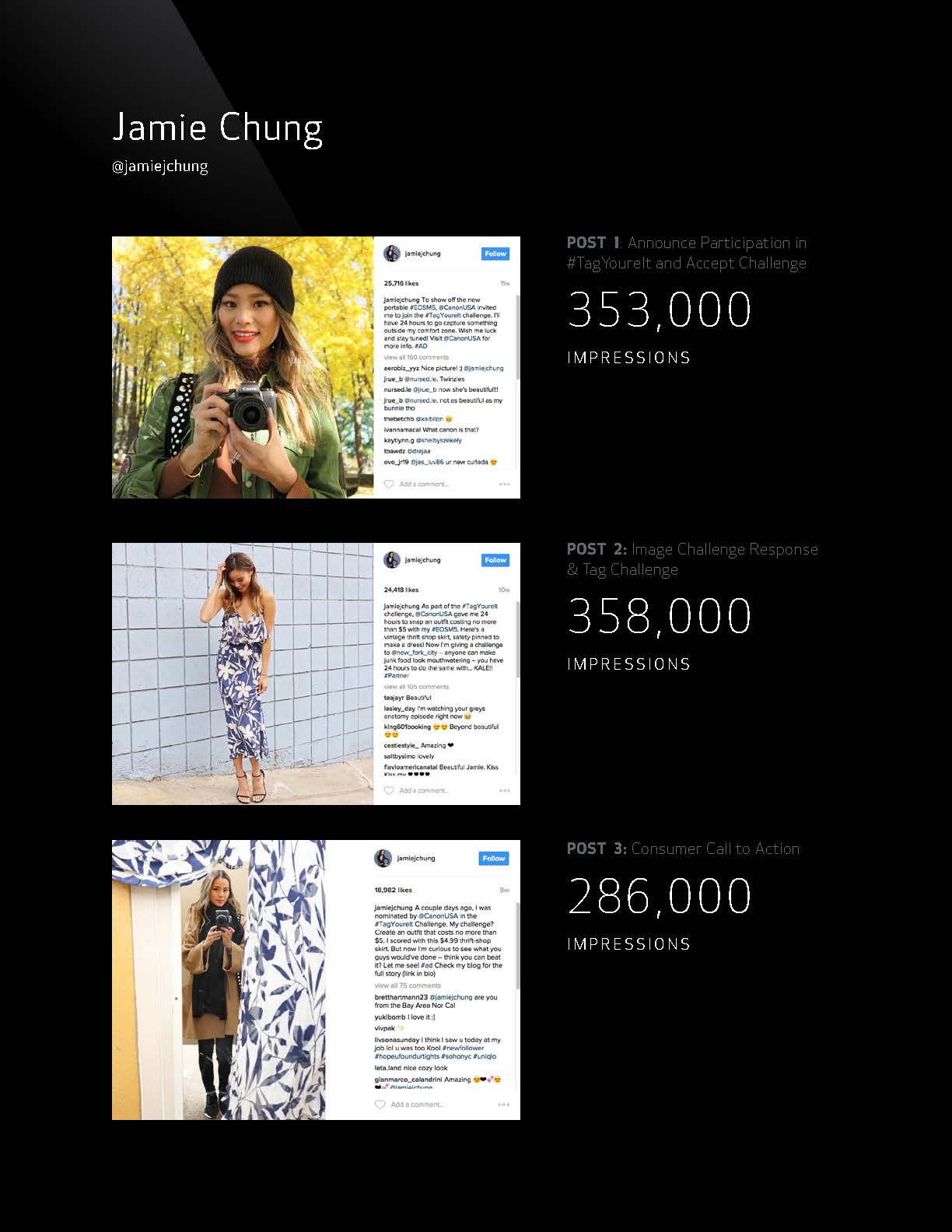 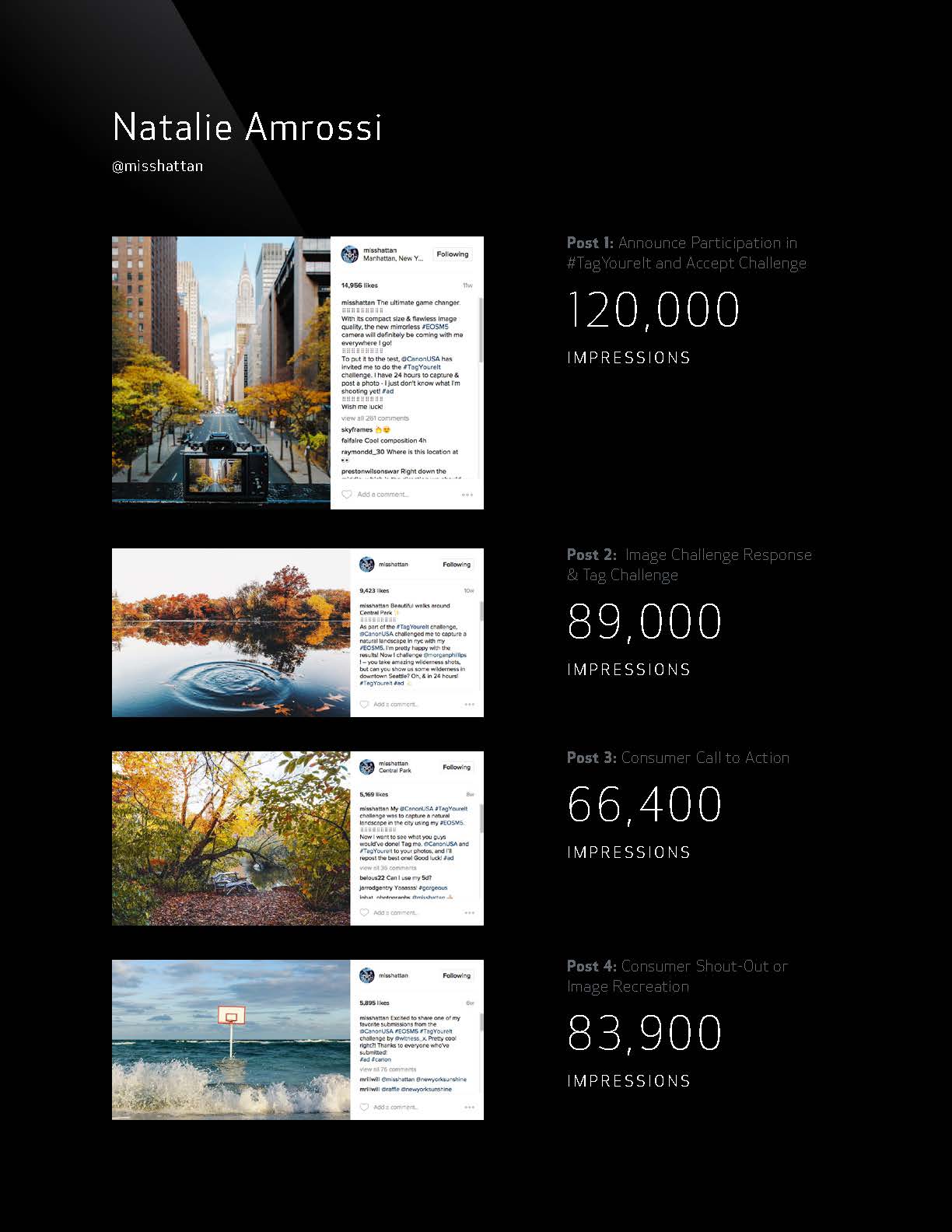