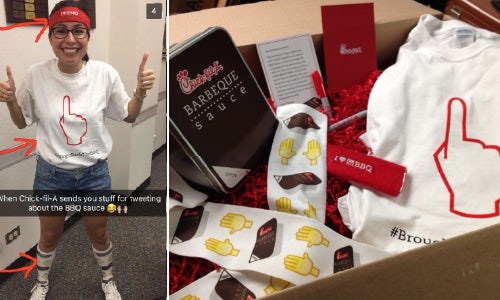 In July of 2016, Chick-fil-A changed its Original BBQ sauce to a new Smokehouse BBQ after consumer testing showed it paired well with new sandwich products. Customers didn't like the change and, as they took to social media to make their feelings known, Chick-fil-A quickly learned how passionate its guests are about their sauces. For them, there was no replacement for the Original BBQ sauce. It was a beloved part of the Chick-fil-A dining experience.

Chick-fil-A's social channels quickly flooded with 6,000+ inbound messages from fans begging @Chick-fil-A to #BringBackTheBBQ. There were 17,000 social mentions regarding the change and the average weekly BBQ sauce mentions increased 9X. Sentiment was 73% negative as fans expressed their literal distaste for the change, petitioned for the sauce's return and even stalwartly boycotted Chick-fil-A restaurants. Parents were most vocal in pleading for the return, as their children would no longer eat Chick-fil-A kid's meals without the Original BBQ sauce. Chick-fil-A simply couldn't ignore this all-out grassroots campaign from fans begging it to #BringBacktheBBQ.

We had to show fans that their feedback mattered and let them know Chick-fil-A heard them, loud and clear. Rather than simply rolling the Original BBQ sauce back out, Chick-fil-A and its agency partners set out to ensure the return was celebrated in a notable and personal way, while still keeping things fun and lighthearted. So we created a campaign to share the news of the sauce's return where it all began — on social.

This customer service initiative required an assortment of teams, both at Chick-fil-A and among its partner agencies. Community Managers identified the increasing conversation early on. After a few days of monitoring, our analysts validated the scale of conversation and sentiment change via social listening. This information was quickly escalated to Chick-fil-A's Menu Development and PR Teams, who had already been hearing complaints from the field. After three months of consistent feedback, Chick-fil-A made the business decision to bring the Original BBQ sauce back, something relatively unheard of for Chick-fil-A.

Chick-fil-A wanted to show its fans that it was owning up to the not-so-favored change in a humorous way, which meant a corporate announcement just wouldn't do. Chick-fil-A and its agency partners coordinated across all customer touch points to launch the big news on the same day — October 11, 2016 — to ensure everyone heard that the Original BBQ sauce was coming back.

First, we created a "Mean Tweets"-style video using Twitter complaints from fans, where Chick-fil-A corporate employees and Restaurant Team Members read the tweets, keeping things fun and lighthearted. We also expanded our community management efforts to respond 1:1 to fans who tweeted #BringBacktheBBQ to tell them we'd #BroughtBackTheBBQ, just for them. We responded to the majority of fans who tweeted us, and also added other hashtags to keep Chick-fil-A's responses fresh — i.e., #OriginalFTW #BBQSauceLoversHaveSpoken and #PrettyPleaseWithBBQSauceOnTop.

Outside of 1:1 social responses, custom Surprise & Delight (S&D) kits were sent to 250 of our most vocal yet gracious fans. The BBQ kits were full of branded, BBQ-themed swag, including a tin lunchbox, T-shirt, tube socks, sweatband and even customized BBQ sauce bottles — all topped off with a personalized letter from the Chick-fil-A team. Fans posted pictures of their boxes and — rocking their new BBQ swag — expressed how ecstatic they were about the return of the BBQ sauce.

One of our most vocal personalities was Jared Guynes, a Facebook influencer with ~60,000 followers who posted a video expressing his outrage over the sauce change. After the announcement that the Original BBQ sauce was coming back, he posted another video to express his excitement. In real time, our Social and PR teams created a personal video response to Jared from Chick-fil-A's VP of Menu Development, David Farmer. To top it off, Jared was also one of the fans who received a S&D kit, complete with a gallon of Original BBQ sauce. He Facebook lived himself opening it, further spreading the excitement with both his fans and Chick-fil-A's.

Jared is a perfect example of how #BroughtBackTheBBQ was an unprecedented, one-of-a kind customer service campaign. Not only was it personalized to Chick-fil-A's fans, but it was also a timely, wide-reaching program that solved a very prominent customer pain point in a fun, lighthearted way.

#BroughtBackTheBBQ was the first Surprise and Delight initiative executed entirely via social media. In addition to social conversation, it also generated positive news coverage, with write-ups in Business Insider, People Magazine and Thrillist. This initiative allowed us to take the heat off of Chick-fil-A's restaurants, while also building a deeper relationship with its fans online.

Community Managers read more than 7,500 messages from raving BBQ sauce fans, responding or reviewing to ~164 messages per hour during the first three days following the announcement. On the day the return of the sauce was announced (10/11/16), there were 3,600 mentions of Chick-fil-A + BBQ sauce, which was more than 18X higher than the average daily mentions seen in the previous three months. BBQ Sauce mentions were 92% positive during the same time period, a significant shift from the 73% negative conversation prior to the announcement. The activation drove a total of 1,900 #BringBackTheBBQ and #BroughtBackTheBBQ hashtag mentions across all channels within a three-month period. 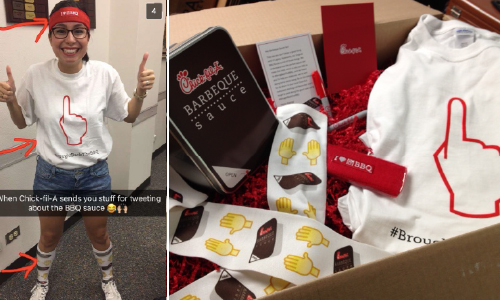