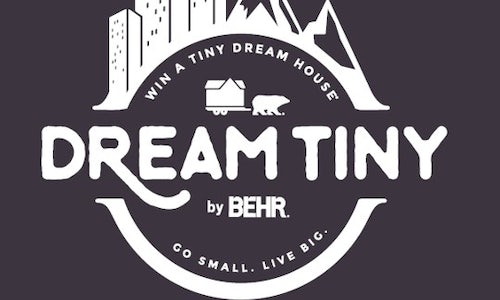 •Create a campaign to engage consumers and generate social and earned media buzz, as well as positive word-of-mouth around the Behr brand to drive top-of-mind awareness and build brand equity.

•Leverage the best practices in the social media space and consumer insights/behaviors to engage consumers (existing and potential new ones) and let them co-create with the brand in an innovative and relevant way that encourages them to share with friends.

•Generate earned media and increase positive sentiment around the brand.

The team identified the growing popularity in the "tiny house" movement. It is a social movement where people are choosing to downsize the space they live in to enable simpler living in a smaller, more efficient space. The most popular reasons include environmental concerns, financial concerns, and the desire for more time and freedom. Additionally this movement has really resonated with Millennials, who can still experience the dream of home ownership but in a new way that also allows for more financial freedom to spend their time and money on the things that matter most to them.

The Opportunity: Leverage this popular and growing movement to create ideas that bring our campaign to life in a fun and engaging way.

To do this, BEHR launched the Dream Tiny sweepstakes, which ran from 7/1/16 to 10/1/16. Using BEHR's Dream Tiny microsite (www.BehrDreamTiny.com), consumers could create a virtual tiny house, customizing it with shades of BEHR paint and put the home in their "dream destination." Users also shared stories of their "dream life" as they entered for a chance to win their very own tiny house RV from Tumbleweed or other valuable prizes.

As part of the campaign, Behr wanted to reinforce its commitment to doing good so they partnered with Operation Tiny home to enhance credibility. With the nation's major need for veteran housing, Behr donated $1 for every entry (up to $25,000) to raise funds for the charity and generate consumer participation.

Additionally, BEHR partnered with influencers to create unique content around tiny living and small space DIY ideas to leverage on its site and social channels. They also were a lead sponsor in the Tiny House Jamboree in Colorado to reach tiny house enthusiasts and showcase their paint colors and the actual tiny house RV grand prize.

Catalyst supported the program by launching paid social campaigns throughout the sweepstakes to build brand equity, increase top-of-mind awareness, and drive sweepstakes entries. By associating BEHR with this socially/environmentally conscious movement, the campaigns also sought to generate positive word-of-mouth and sentiment around the brand.

To maximize awareness, they utilized paid media and diverse ad types on Facebook, Twitter, Instagram, Facebook Live, Pinterest and SnapChat. Video was key as it was best-suited to highlight the versatility of tiny spaces and the personalization opportunities available through BEHR paints.

By combining environmentally aware and in-market audiences, Catalyst targeted consumers who would be interested in both the content and the sweepstakes.

Implementation: In the campaign's first phase, Catalyst deployed sweepstakes entry ads across Facebook, Twitter, and Instagram. They used multiple platforms to ensure that the campaign reached the target audience regardless of their preferred social network.

Next, Catalyst promoted a Facebook Live video from the Tiny House Jamboree in Colorado. Using the Live event, the video showcased the ins and outs of a tiny house that featured BEHR and MASCO products. The video reached 3 million people, spreading the word about the sweepstakes. Catalyst also promoted a Snapchat geofilter for users to layer over their event photos.

In phase three, Catalyst promoted a 360 image of a tiny house interior, again showcasing the versatility of a tiny space and opportunity for customization through BEHR products. This was a unique activation as it enabled BEHR to showcase an entire tiny house from top to bottom within one picture. The post drove over 12,000 engagements and 9,000 clicks to the sweepstakes landing page.

The campaign concluded with "tiny tip" ads, which ran on Facebook and Twitter, and provided pointers for how to best assimilate to tiny house living.

The Dream Tiny paid social campaigns led to big results. The goals of the paid social campaigns were to increase awareness and to drive people to the sweepstakes entry page where they could submit entries and engage further with BEHR content. Our campaigns succeeded in driving awareness by delivering over 127,000 link clicks, as well as 82,000 engagements on social ads, a key metric for the brand. Additionally, the promotion of the Facebook Live video reached over 3.3 million people, with nearly 10% of them watching a quarter of our 15-minute stream. Campaign sentiment from Facebook efforts was 93% positive, as users increasingly viewed BEHR in a positive light. Ultimately, the paid social clicks led to over 28,500 sweepstakes entries, with over a quarter of users who clicked to the landing page entering the contest. 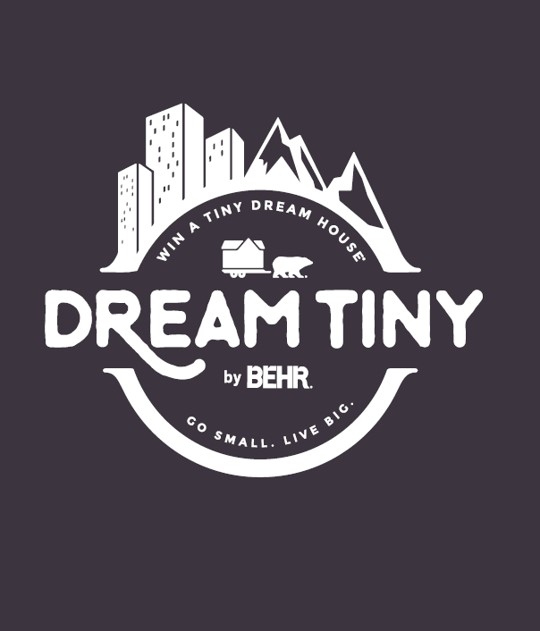