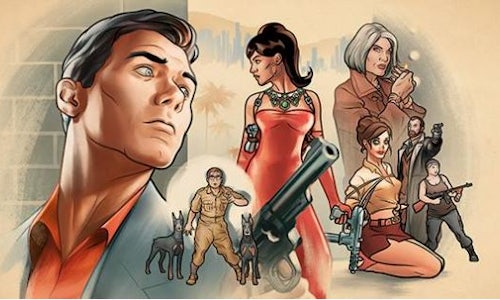 Archer - A Day at Floyd County

FX launched their network Snapchat account in 2017 as a way to bring fans closer to their favourite shows. In addition to covering live events and driving tune-in, the network wanted to create unique Snapchat content that gave its audience direct access to talent. Fans came to the FX Networks Snapchat account for in-the-ment authentic video…that still had a high bar for entertainment and creativity. To meet that demand, FX created a fully written & produced Snapchat story featuring the hilarious team from Archer.

The animated stalwart had just come off an acclaimed seventh season and recently teased a creative reboot for season 8 at Comic-Con. To further whet the fans' appetite, FX decided to visit the Floyd County production offices and take the growing Snapchat audience behind-the-scenes as the creative team worked on the new season.

To lead this tour, FX recruited fan-favorite actors Amber Nash ("Pam Poovey") and Lucky Yates ("Dr. Krieger"). Working in conjunction with the improvisational actors and the show's producers—and armed only with an iPhone 6S—FX created a hilarious day of snaps that teased the new season while emphasizing the dynamic between top talent. Because the actors were involved in the producing the experience, they had a greater investment and worked tirelessly to perfect the story. They also promoted the Snapchat takeover from their other social feeds, driving thousands more users to the day's story – and giving the growing FX account a healthy injection of new followers.

Over 20,000 fans watched the story throughout the day and the account received hundreds of messages related to the new season of Archer. It also led to a spike in conversation on the other platforms, drumming up excitement during the typically quiet off-season. By offering its audience such direct and entertaining access to top talent, the FX Snapchat was making a promise to its viewers – this account would be worth your time.

Video for Archer - A Day at Floyd County