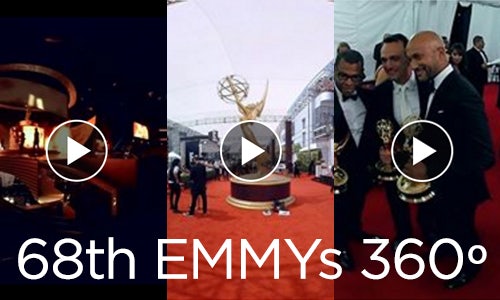 To reward Facebook users at home with a fresh and interactive perspective on the Emmy Awards.

To capture, for the first time, a three-part experience of the Emmy Awards in 360 video:

Red Carpet
What it actually looks like, from any angle, to walk the red carpet.

Opening Monologue
One of the most talked about moments during an awards show, record the EMMYs opening monologue as it's never before been experienced: in 360 video.

Winners Walk
Follow an Emmy winner from stage to press and beyond, catching all the many perspectives and goings-on all around.

The Television Academy and Facebook collaborated on strategy for these pieces. Surreal was brought on to execute.

Red Carpet Walk
This was tightly scheduled for a time during EMMYs day that would allow for a great view of the platforms and stops on the red carpet but wouldn't get in the way of the press speaking with talent. Surreal then edited this piece in the Media Center and uploaded to the Television Academy Facebook Page.

Jimmy's Monologue
Jimmy Kimmel approved this idea. The tennis ball-sized camera gave a clear line to both Jimmy and the audience and didn't interfere with the live broadcast. ABC oversaw the edit before it was shared via Jimmy Kimmel's, ABC Network's, and the Television Academy's Facebook Pages using Facebook's Crossposting capabilities.

Winners Walk with Key & Peele
This was the piece that was most up-in-the-air, since we had no idea who would win. We kept in close touch with each winner's/winners' publicity teams, and the team for Key & Peele graciously allowed Surreal's shooter and the Television Academy's Social Media Manager to tag along. Coverage included the circuit that winners take once they leave the stage – from the Thank You Cam to trophy table to various staged photo stops, to interview sets, to General Press, and finally the General Photo Room.

Key Features
• Of the three 360º videos, the red carpet got the most views yet included the fewest celebrities
• 360º coverage of an awards show monologue had never been done before
• Winners Walk 360º had to be produced on-the-fly, after as much prep as possible

– 99% of the reach for the 360 videos were non-fans.
– These posts helped drive a 7.8% growth in size of the Emmys / Television Academy Facebook page, which received 22,672 page likes in the 24 hours following the show. 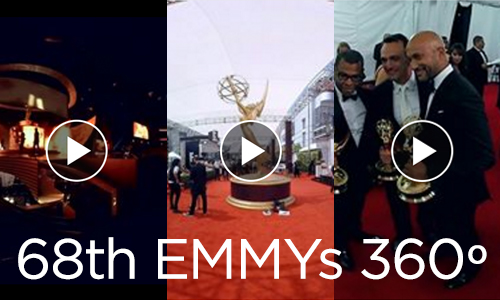