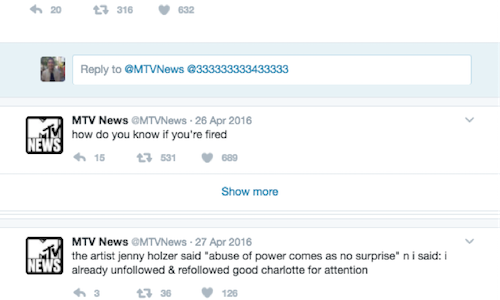 Our goal was to develop a strong brand identity on Twitter to help increase the amount of engagement with the account and referral traffic back to MTVNews.com.

To turn our Twitter account into an effective marketing vehicle for the MTV News brand, we tapped writer Darcie Wilder, who tweets from the handle @333333333433333 and has a dedicated audience of 93,000 followers (and a novel being released Spring '17), to man the @mtvnews Twitter account. The only task: make it her own. The first day Darcie took over the account, everyone thought we were hacked. (Including Twitter, who sent us concerned emails.) Darcie tackled running the account with the goal of letting people know that something new and different was happening at MTV News. This included teasing fans of One Direction and Frank Ocean, teasing The New York Times and Twitter, and, well, . In an effort to give a more personal touch to the account, there was a lot of updates on what was happening at the MTV News offices, including office supplies, Bagel Wednesday, lunch, and emails. We also spent a lot of time tweeting about animals, including cows, kangaroos, and a celebration for . On the day it was announced Vine was shutting down, Darcie tweeted a string of videos that acted as a eulogy for the platform. In response to the stressful political climate, we began sharing #mtvsoothingrelief videos to ease our followers' stress. And yes, we took on a lot of the comments directed at MTV. We poked fun at the usual comments we on Twitter and made jokes about the VMAs (our biggest brand priority of the year). The account exists half as a typical news outlet Twitter account, half as a post-modern deconstruction of a corporate Twitter account; self-aware of its ties to the Viacom mothership, without stepping fully stepping into the world of cliché brand accounts.

Running the @mtvnews account in this fashion allows us to play with the idea of what a traditional news account does on Twitter. We were able to drop any pretense of what the point of a corporate Twitter account is. Our decision was simply to spend more time crafting good, funny tweets to build engagement with the brand. This has proven successful – the account totaled 4.5 million followers before Darcie took over in April 2016. Since then, we've grown by 500k to a total of 5 million followers. 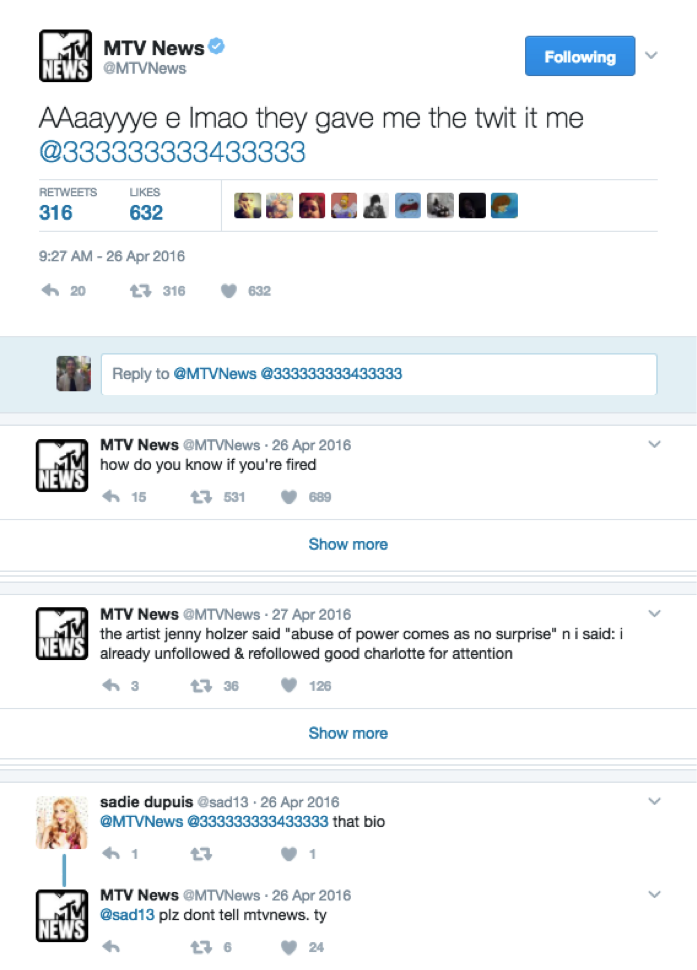