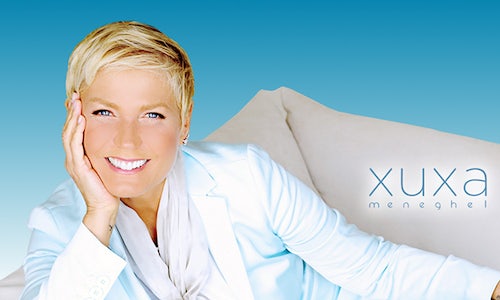 Xuxa is one of the biggest Brazilian TV hosts of all time. She was a huge success between the 80s and the 90s, mainly because her gigantic appeal with children.

She spent her whole career at another TV network, the leading one in the country - and now, in her fifties, she moved to their most significant competitors, Record, to create a more adult, late show. Her debut on a new TV channel has being waited for, for a long time. People were eager, both because anyone between 25 and 35 was crazy about her during childhood, and for Xuxa is sure one of the top brazilian celebrities of the last decades. She's a big star here.

This huge project had it's debut widely labeled as the most important moment of the Brazilian televion on the entire year.

Her first visit to Record's headquarters, months prior to the premier, was an example of what we were dealing with. That was a massive event, with large coverage and buzz around the web.

The show itself had her name: Xuxa Meneghel. The whole concept behind it revolved around social media and that mix of nostalgia with the new, more mature, version of her. Which was heavily influenced by Ellen DeGeneres - and she was up to become a kind of Brazilian version of Ellen now.

Our goal was to build an outstanding digital strategy to boost even more that expected debut.

A project as big as this one needed a very wide range of action as the one we built for it. And her personality and personal signature and past are written all over it.

Before the debut itself, we had a countdown both at our social media accounts and hers, mainly at Instagram and our official website - with funny, creative productions, such as Xuxa being unenployed at her mansion, looking for a job at the paper and founding us.

Then the show's premiere came up. We created a Twitter room, where Twitter users that are widely known here in Brazil gathered to comment the show while they watched it. We livestreamed it on our official website, simultaneously while the TV show went on. The room had a screen with hashtag counter, best tweets and memes. We also broadcasted the event throught Periscope - ours and our fellow guests accounts.

Xuxa Meneghel TV show itself was built minding the web (and social media). For starters, the show's content is social-oriented - example: the day Xuxa called to the stage a girl everyone thought was named Claudia. That's because 20+ years ago Xuxa shushed a girl up by saying "Yeah, sit down Claudia". That became a huge meme in Brazil. Aware of that, Xuxa invited that same girl, now a grown woman, to the stage (and her real name, by the way, is Erika). And gave her a private seat at the audience.

The stage is also influenced by social, with a huge LED pannel, that displays a live Instagram mosaic with the photos that are being taken during the show. And everytime Xuxa became the 1st Trendint Topic on Twitter, being it Brazil or WorldWide (which is pretty often), she celebrates dancing at that very moment.

There's Xuxa Online, a digital "extention" of Xuxa Meneghel, that runs live during the TV break on our official website. It does also the backstage coverage, with exclusive content, and is hosted by an actress of our cast, that began her carreer 20 years ago as Xuxa's stage assistant.

We livetweet the show every night, with real-time made GIFs and memes. Our partnership with Twitter also includes showing tweets on screen, and having a compilation of the best tweets made by Twitter Media itself after every show. One of our first features was an autoreply mechanic on Twitter, sending a video with an exclusive look at the Xuxa's stage for everyone that tweeted with #XuxaNaRecord.

Xuxa was the 2nd TV show that stirred up the most buzz in social media in August, around the entire world, even considering that it's language is portuguese. There were more than 283 thousand tweets about the premiere - with is huge, if you compare with Fear The Walking Dead, awaited globally, leading August with 300 thousand tweets about its premiere, according to The WIT, on article published by WorldScreen.com.


The premier alone, according to Twitter Brazil, had 600K people talking about it, with 22M+ impressions, leading the Twitter official TV ranking that week in the country (and beating the show that was considered a Twitter phenomenon in Brazil so far). 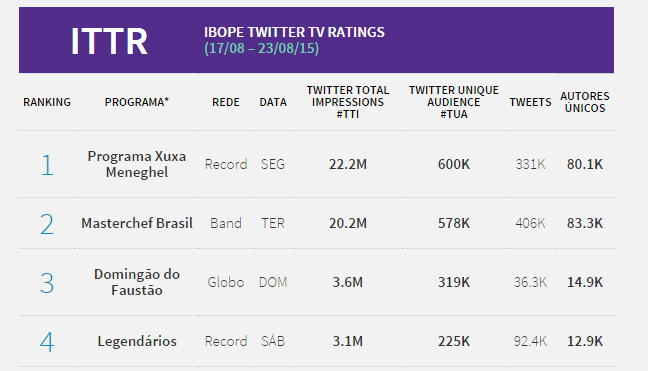 We had both the top Trending Topic here in Brazil and WorldWide, which was #XuxaNaRecord - a hashtag we created, worked with the fanbase and showed onscreen. And from that point on, we trended almost every episode (the show is aired weekly). Spontaneous coverage, a blast of memes and Gifs on social environment and, above all, a complex and acclaimed strategy that was able to satisfy that eagerness of the public. They were expecting something big, strong, bold. And they found it in our work. 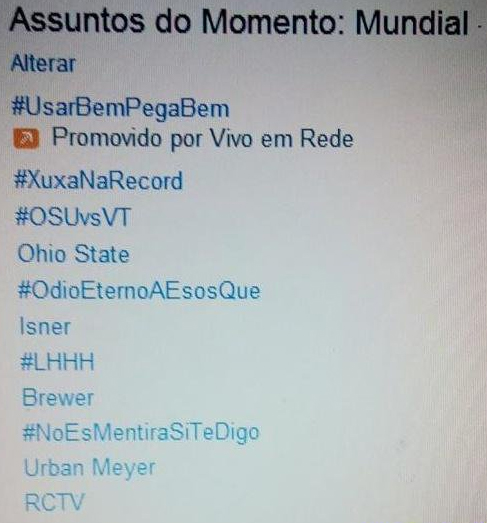 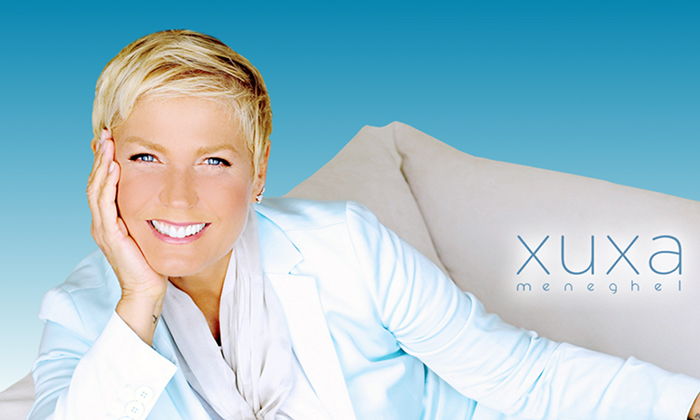 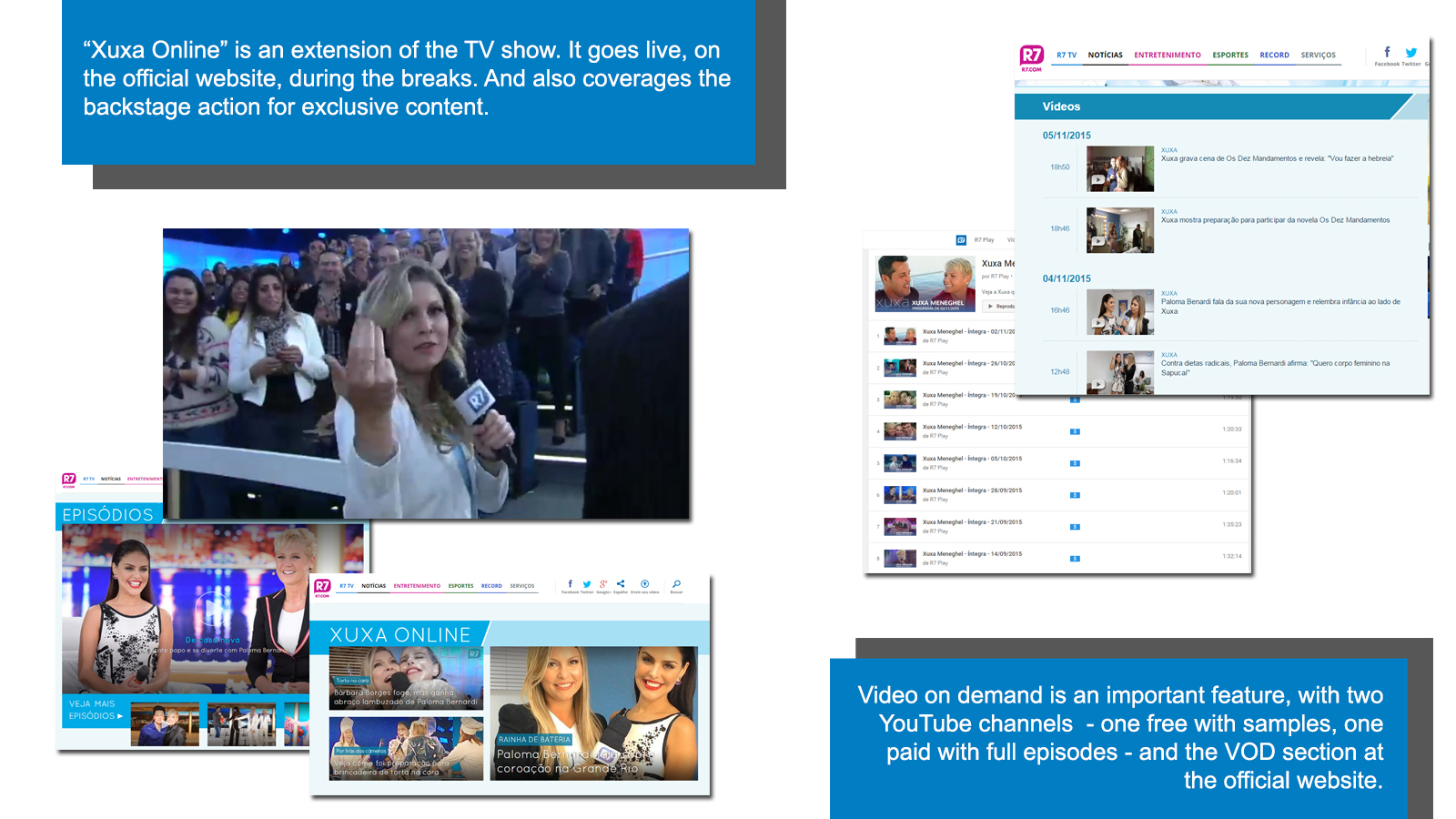 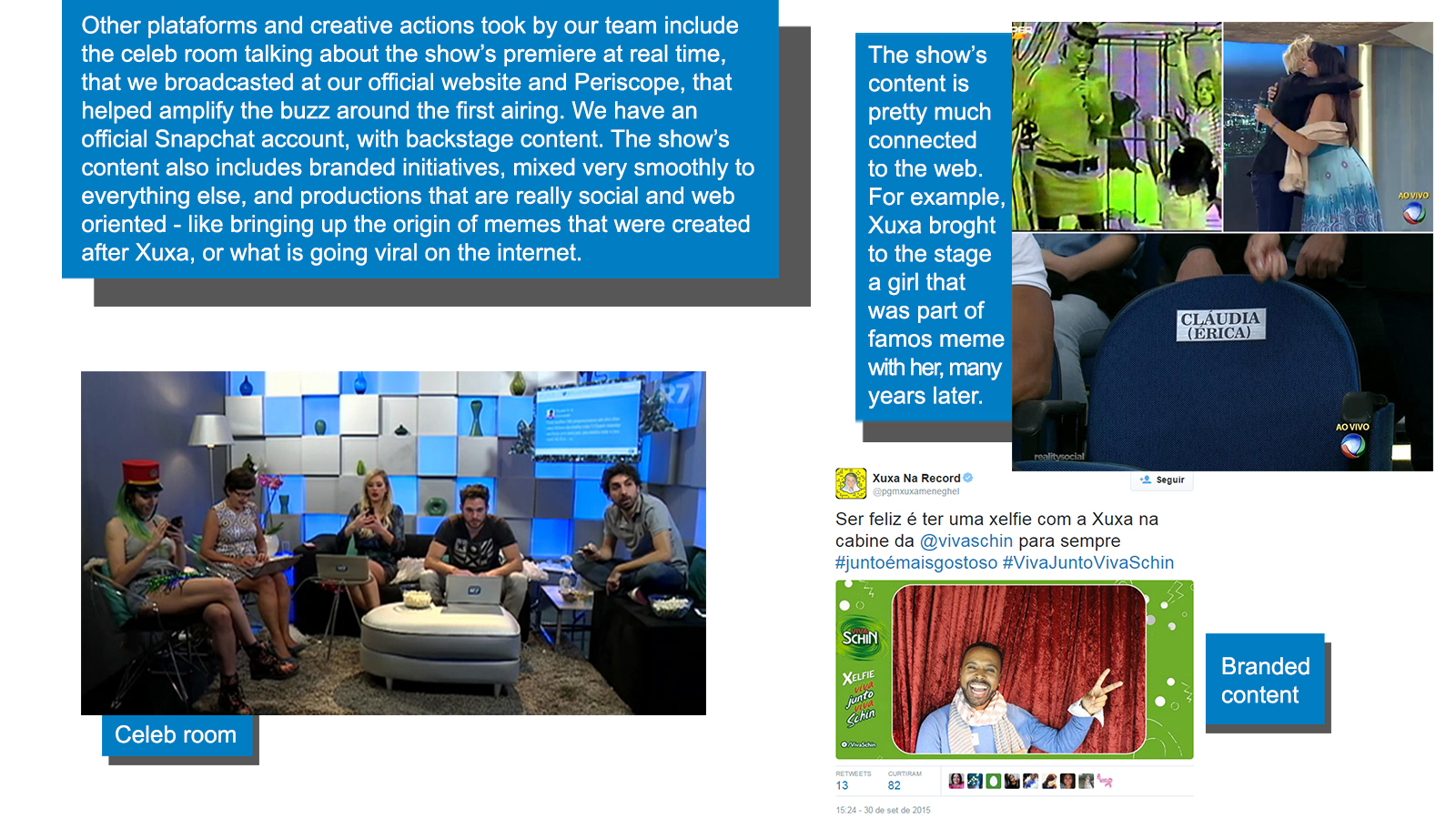 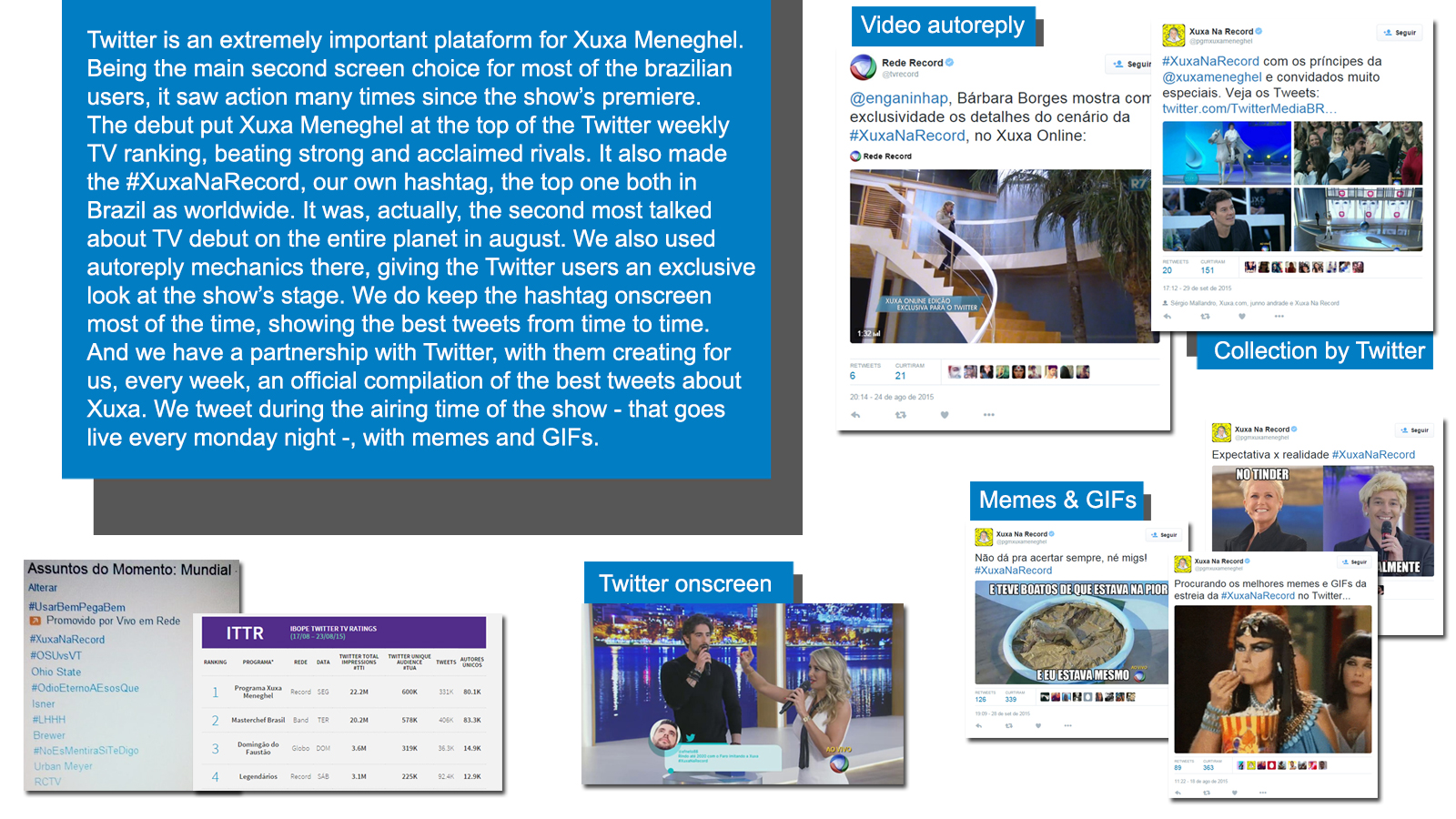 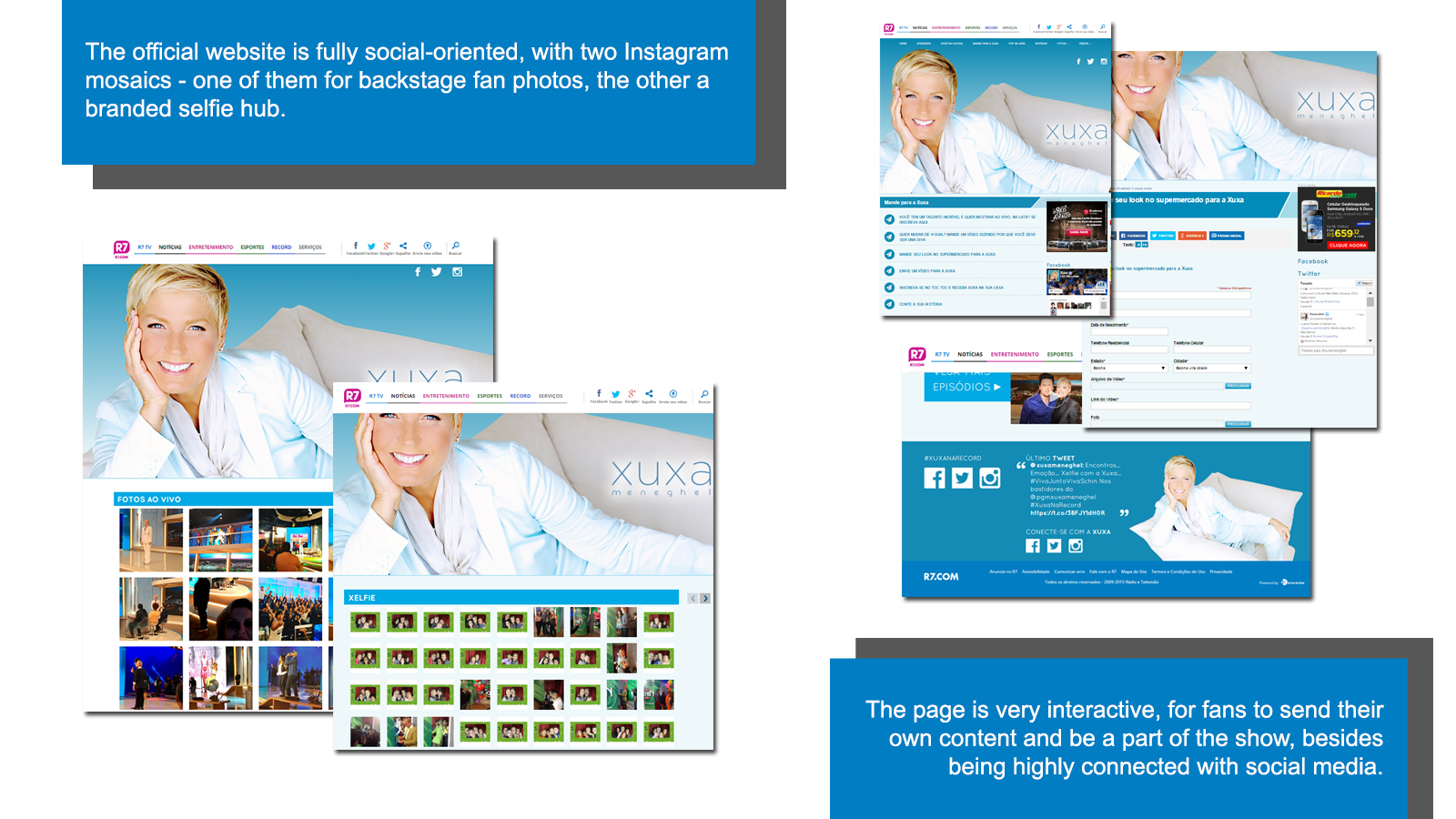 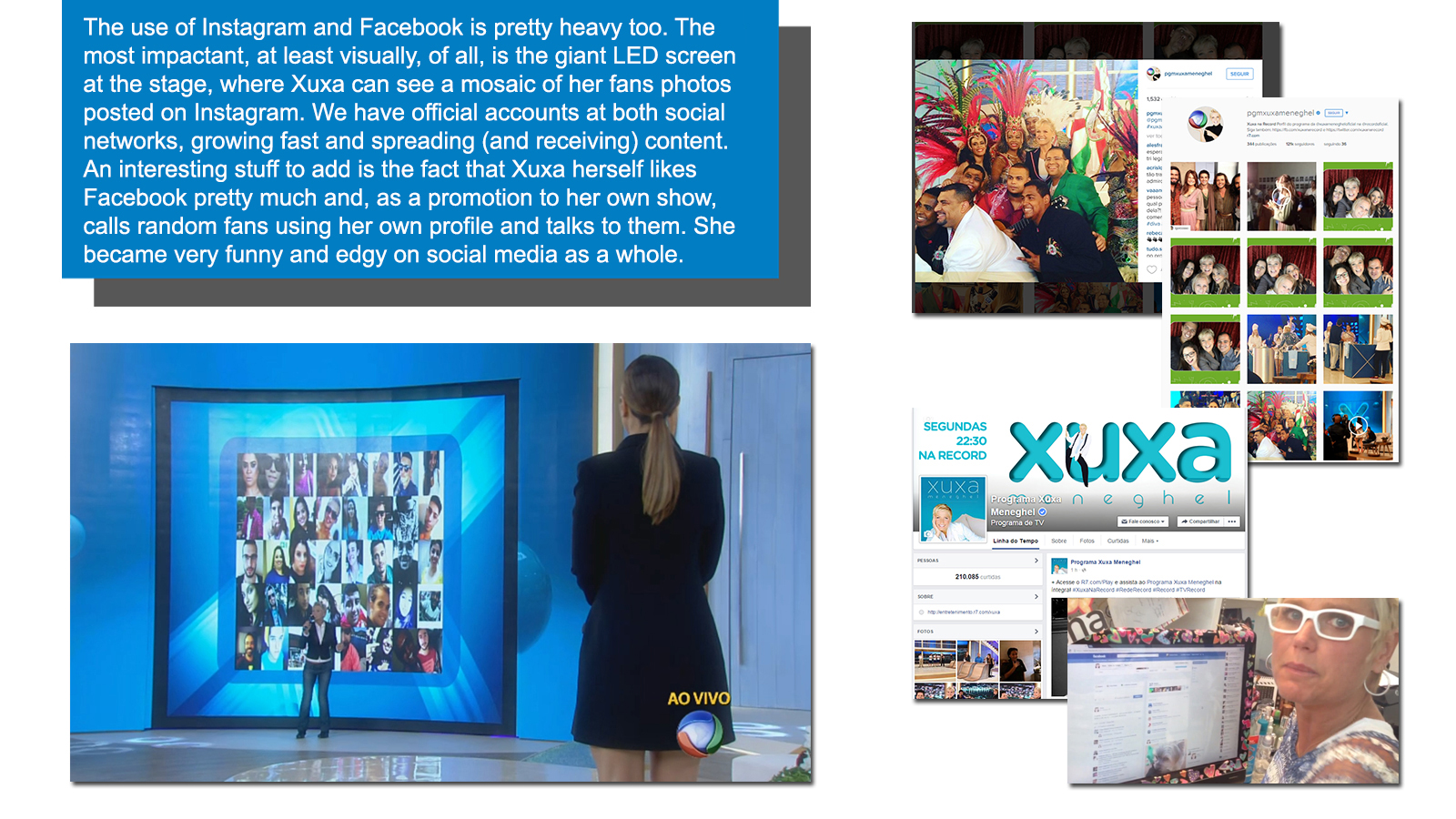