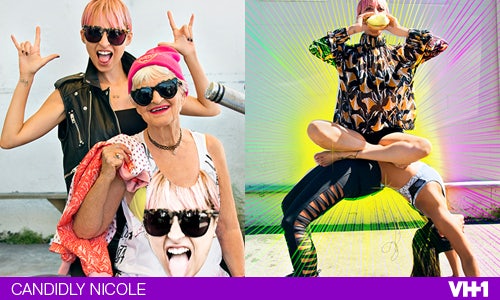 The objective of the campaign was to build on the network's relationship with social influencers to go beyond traditional engagement tactics and take collaboration with social influencers to a new level to promote the upcoming season of Candidly Nicole. Both the network and Nicole have tremendous engagement with fans on social platforms; in fact, the reality series was originally centered around bringing to life Nicole's Twitter feed, which was voted one of the "best Twitter feeds" by Time magazine. This non-traditional approach to engaging fans targeted a native digital audience with the massive followings of the social partners while leveraging Nicole's celebrity status.

In choosing to partner with influencers across various verticals including comedy, beauty, style, wellness and entertainment, the promotion aimed to reach both new and existing audiences to create anticipation and excitement for the premiere on various social platforms.

Separately, the campaign also aimed to position VH1 as a thought leader and innovator in leveraging social media strategies for linear programming with key trade media and to further promote the second season premiere and drive tune in with top entertainment media.

The digital video series "Candid Moments" was part of VH1's strategy to break the boundaries of traditional media to drive awareness and engage fans in an innovative way ahead the season 2 premiere of Candidly Nicole. The campaign was designed to highlight Nicole's naturally funny personality in improv-style situations with social personalities whose varied audiences relate to Nicole's quirky, outspoken self. Additionally, as both the network and Nicole's audiences are highly engaged online, the campaign aimed to reach fans right where they are (online) with content they crave.

In order to drive both new and existing fans with various interests to check out the newest season, VH1 partnered with social influencers across different verticals that relate to Candidly Nicole themes including comedy, beauty, style, wellness and entertainment. In each episode from the "Candid Moments" video campaign, Nicole paired up with an online personality to learn a new skill that she could bring into the upcoming season. The ensuing outcome resulted in lots of laughs and adventures throughout. With The Fat Jew, Nicole took cues from the online celebrity on how to be shady. Vlogger Jenn Im of Clothes Encounters is known for her beauty tips and tutorials, so in her episode Nicole learns how to give a makeover with some hilarious mishaps. Girl With No Job is supposed to teach Nicole how to relax, but she gets a tutorial in taking selfies instead. Hannah Bronfman attempts to give Nicole tips on maintaining a balanced diet, but Nicole's love for cheeseburgers wins out. Finally, badass grandma and internet sensation Baddie Winkle shows Nicole how to age gracefully, which included a brush with bikers and margaritas.

The campaign leveraged the video content across various social platforms to create the most impact and drive engagement. While the videos were being filmed, both Nicole and the social influencers released teaser Snapchat videos (including the launch of Nicole's Snapchat) as well as Instagram, Facebook, and Twitter content to create excitement with their followers prior to the video releases. The videos were then launched two weeks ahead of the Candidly Nicole season 2 premiere to build anticipation for the upcoming season. Each video first premiered exclusively with various top-tier outlets to engage different, relevant audiences.

"How To Age" with Baddie Winkle premiered on Cosmopolitan

"How To Balance Give A Makeover" with Jenn Im, "How To Relax" with Girl With No Job and "How To Balance Your Diet" with Hannah Bronfman premiered on People

To create the most impact with digital audiences, the videos were available on Facebook, Instagram, Twitter, Snapchat, YouTube, and VH1.com – and promoted by VH1, Nicole, and the social influencers across their social platforms with additional images, GIFs, and behind-the-scenes content leading up to the TV premiere. Altogether, more than 75 videos, photos and GIFs were created and shared across platforms.

The campaign ultimately culminated with each influencer tweeting the season premiere and engaging in social conversations across platforms with each other around the show.

"Separately, each woman is delightful, but as a pair, they are even better. Baddie's ordering margaritas, Nicole is arm-wrestling dudes four times her size, and both of them are riding on motorcycles." – Cosmopolitan

"The clip is part of VH1's "Candid Moments" video series, which pairs Richie, 33, with young Internet stars ahead of season 2 of her show Candidly Nicole." – People

"The super-fun videos feature the 33-year-old getting tips on everything from balancing your diet to "being shady" with The Fat Jew, Baddie Winkle, Girl with No Job, Hannah Bronfman and Jenn Im — and needless to say, things get pretty outrageous!" – Life&Style Weekly 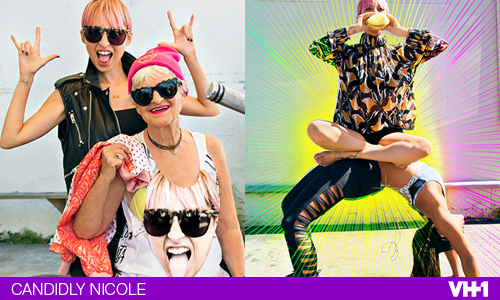