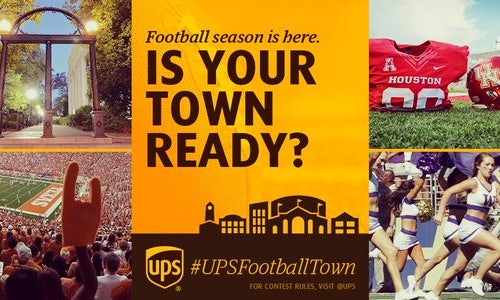 For its 2015 college football campaign, UPS needed an idea that would speak to the brand's core small business audience while still connecting with college football fans. The campaign also had to deliver against another ongoing objective of UPS's marketing efforts — shifting perceptions of the brand from a company that delivers brown boxes to a partner who generates outcome-oriented solutions.

We decided to step off the football field and into the college towns themselves. We soon discovered that business in these towns explodes during football season. Small business owners have to make a lot of big plays to handle this massive transformation — and UPS is there to help make that happen.

The Concept: "We Support Football Towns"

Seven Saturdays a year in small football towns across America, everything local businesses do is magnified exponentially. With massively increased demand, these businesses must deliver the gameday experience customers expect. And UPS is there to help these small businesses tackle their gameday challenges, season after season.

We brought our idea to life with videos, static posts and influencer content that told the story of how college football towns and businesses transform — and how UPS is there to help make it happen. We also launched a nationwide social contest to find the iconic spots in every football town — the eateries, shops and local businesses people cherish — and honor them as official UPS Football Town Business Landmarks.

Contest – A first-of-its-kind, two-part contest was implemented to rally fans to select their "go to" business on game day. The contest leveraged #UPSFootballTown to drive nominations during the month of September, with voting continuing on a branded landing page in October to find the country's Top 5 "UPS Football Town Business Landmarks." We used surprise and delight tactics throughout the contest to reward fans, encourage the businesses to vote and, finally, to recognize our top 5 winners.

Business Series – We developed a series of 12 business posts highlighting UPS's partnership in the college football transformation — from shipping gameday gear all the way to Jerusalem to delivering those coveted season tickets to season ticket holders across the country.

* The majority of the campaign KPIs performed above goal, with the top channel being Twitter.

* The six campaign videos delivered a $0.37 total cost per view with over 1.3M views in total. This collection of videos is the top-performing collection for UPS in 2015.

* Campaign conversations were 100% favorable, which is unprecedented for UPS.

* The #UPSFootballTown Contest received over 2,400 mentions during the 6 weeks of the contest.

* During Phase II of the #UPSFootballTown Contest, landing page traffic increased 146% in a single week. We ended the contest with 23,000+ visits and 10,000+ unique votes in just two weeks.

* Activating small business owners through a contest was a new tactic for UPS in social; it ultimately drove engagement over 100%, well exceeding the 5% to 11% benchmarck we set. 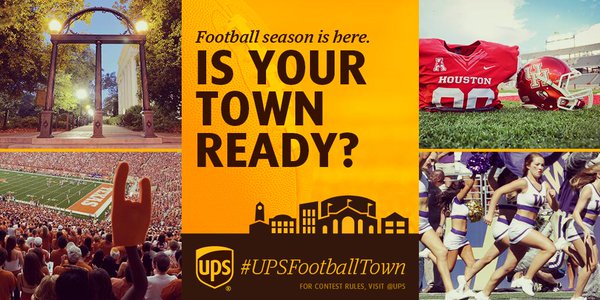