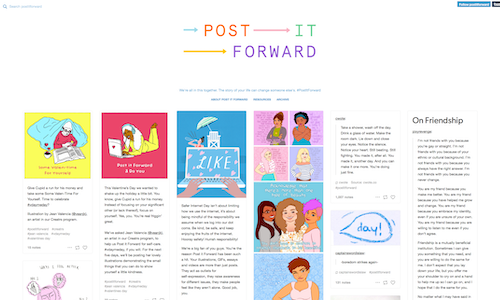 Tumblr launched the "Post It Forward" campaign in May 2015 to promote positivity and support within online communities. PostItForward.Tumblr.com and the tag #PostItForward were created to be safe, online hubs where people can share personal stories and struggles without being judged; individuals facing tough issues could engage in positive and encouraging conversations and find the support and resources they need.

Since Tumblr's inception we have been dedicated to fostering positive and supportive community, especially when it comes to users experiencing emotional or psychological distress - from the invention of the reblog, which was designed as a constructive alternative to traditional online commenting; to our community guidelines, which explain in plain and relatable language what Tumblr is and is not for; to our search intercept PSAs which connect users directly to relevant support and counseling resources prompted by certain search terms. At the same time, our members have always organically reached out to support one another, and organizations that specialize in counseling and support increasingly turn to Tumblr to disseminate their messages and resources.

We knew it was time to become a part of the solution and open up the dialogue around these critical issues facing young people. With "Post It Forward," we aimed to break down down silos between issues - from cyberbullying, to body shaming, to challenges related to sexuality - which are often addressed in isolation but can be deeply intertwined in the lived experience of an individual person.

"Post It Forward" is, first and foremost, a user-powered campaign. Folks are invited to share some piece of advice or positive message they learned (or wish someone had told them) that helped them through a tough time and could help someone else. Users can tell their story via video or long-form text, offer advice, share encouraging art, or connect with others through PostItForward.Tumblr.com or #PostItForward.

The campaign launched in May with the support of Vice President Joe Biden, Brittany Snow, Pete Wentz, Jordin Sparks, Elizabeth Banks, Wendy Williams, First Lady of NYC Chirlane McCray and many other prominent individuals who created videos and shared their personal stories and advice to jump-start the conversation and inspire the Tumblr community to join in. In addition, Tumblr tapped a few of its top Creatrs - Laurene Boglio, Brian Butler, Thoka Maer, Jonathan Reyes, and Mr. Phil - to make the "Post It Forward" concept come to life with vivid art on the blog. Tumblr also leveraged two of these Creatrs to package artwork and animations for limited-edition merchandise that is sold in the Tumblr merch store (www.tumblr.com/merch) with proceeds going to organizations, such as Love is Louder and The M.A.D. Girls, that tackle issues like self-harm and youth empowerment.

Tumblr's Post It Forward showcases some benefits to the anonymity and sense of community the internet can provide. By demonstrating just how prevalent these issues are, through a tactical strategy that integrated with newly launched Tumblr features including; the revamped video player, a native GIF maker, an editorial takeover of the largest Tumblr ad unit, blog customization tools, improved Search capabilities and an anti-harassment "Block" feature; we have seen this campaign turn the community into a positive support tool for those that may not have one in their daily lives.

Tumblr also brought Post It Forward to life by recruiting the first ever Tumblr Corps of Crisis Textline volunteers to enact another level of support for its community - answering a need even beyond the digital space in October 2015.

"Post It Forward" is about raising awareness of and creating positive conversations around an ecosystem of tough issues that affect young people and about which they tend to express themselves online. It's about shedding light on the ways online community can play a unique part in support and recovery around these issues, which in turn shifts the mainstream narrative about the role of social platforms. "Post It Forward" is an example of how online platforms can play a powerful role in providing help and support, rather than acting as a catalyst for negativity and adversity.

Since the launch, we've seen tremendous engagement with PostItForward.tumblr.com and the tag #PostItForward not only on Tumblr, but also across leading platforms including Instagram, Twitter, and YouTube. Thousands of users have created content and shared it with the tag #PostItForward, including videos of personal struggle, advice for others via long or short-form text, as well as illustrations and animations spreading positivity. Users also took part in our GIF tool to share stories.

"Post It Forward" victoriously became a platform that weaved together a wide range of issues and campaigns related to young people's mental and emotional health and shined a light on the ways online connection and community can provide support. 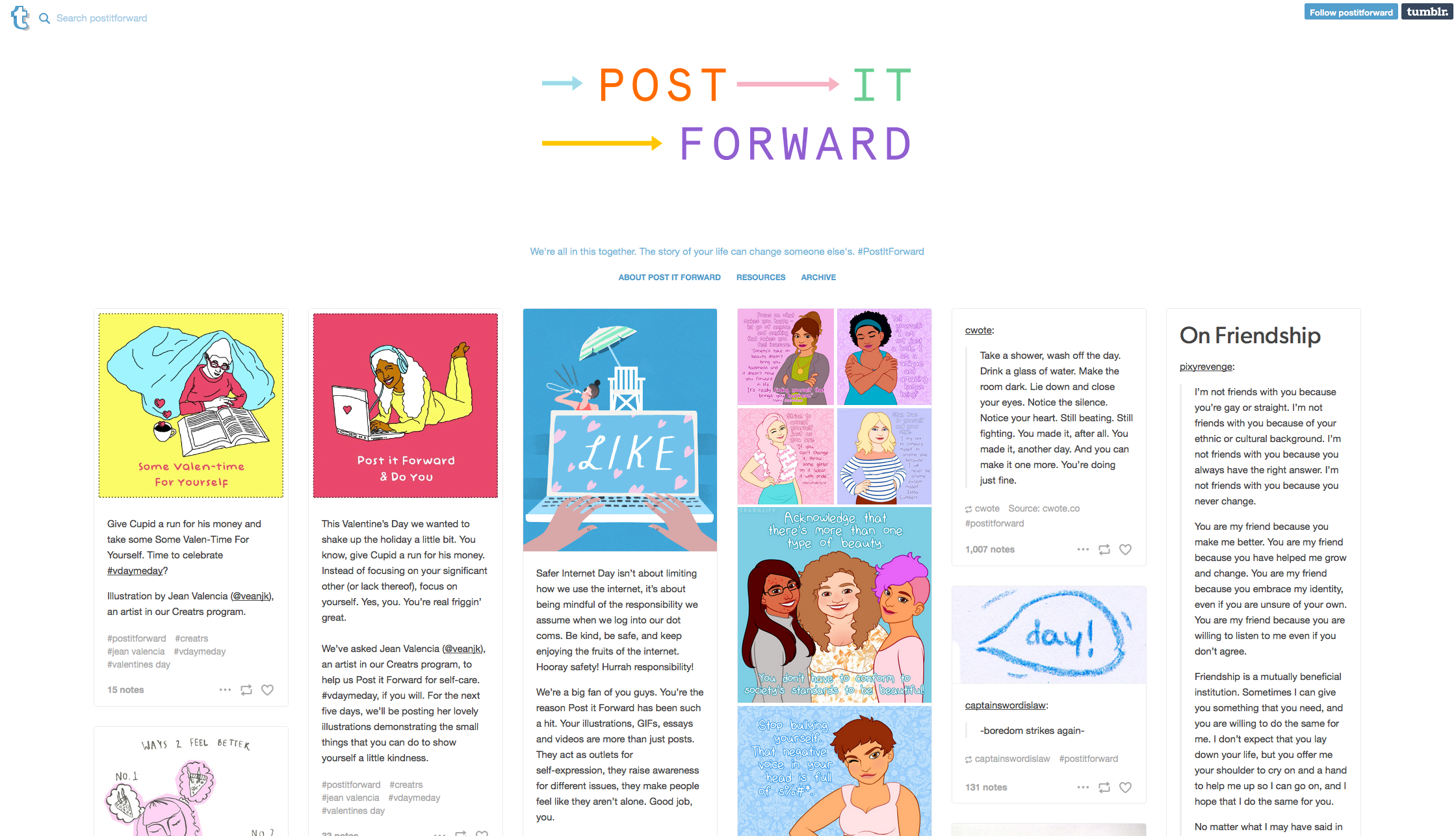 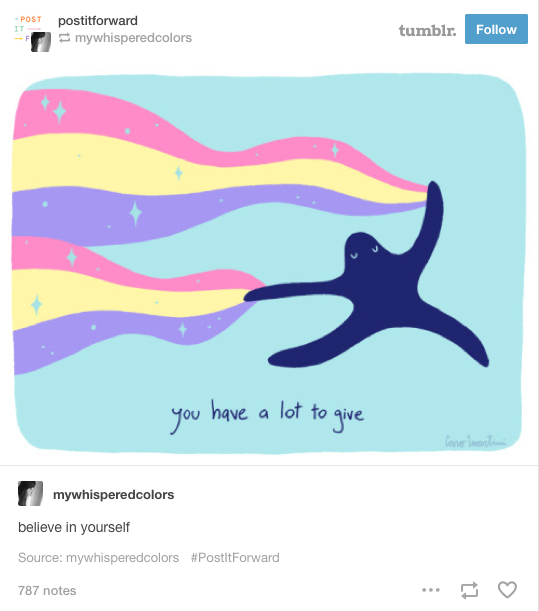 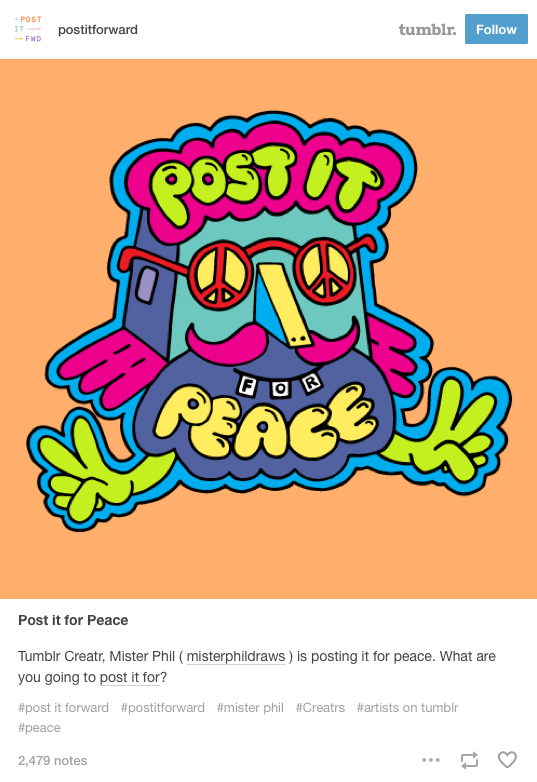 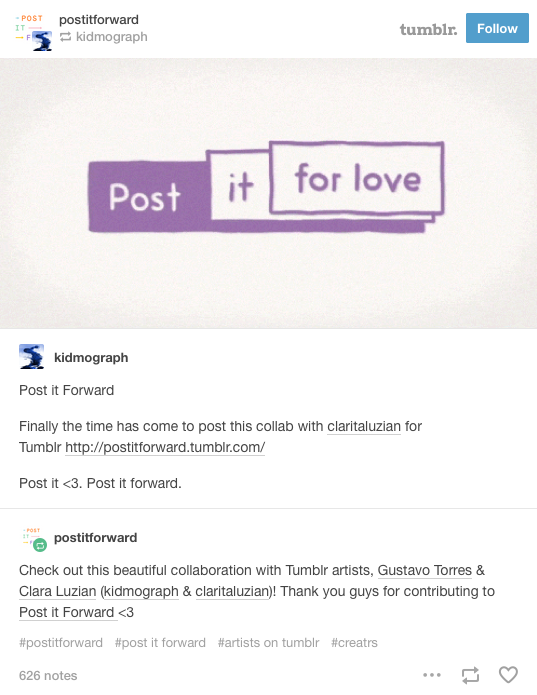 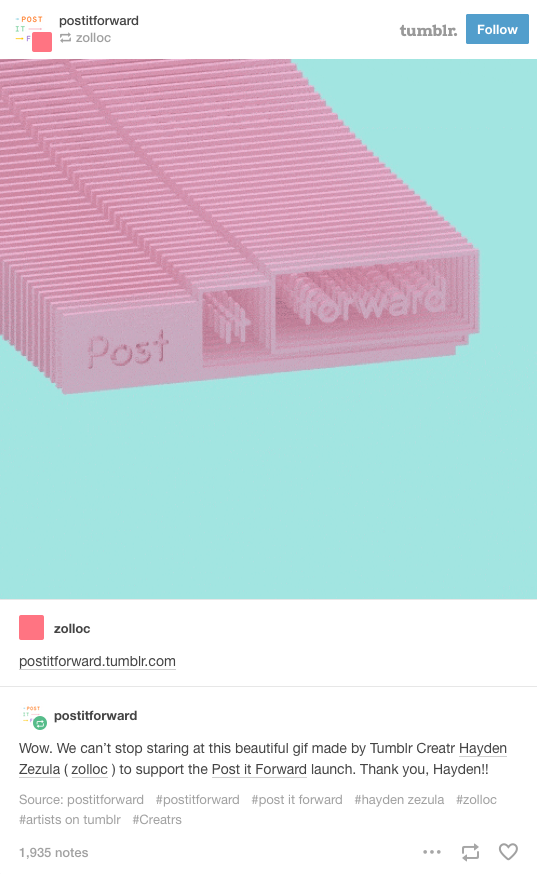 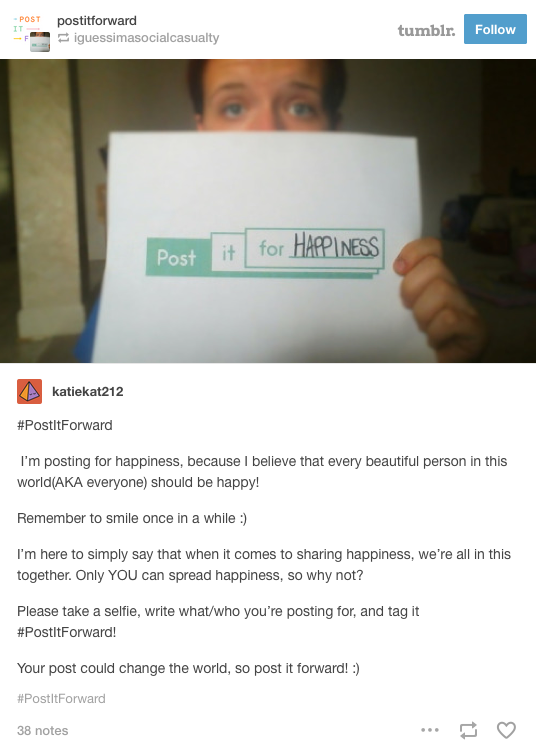 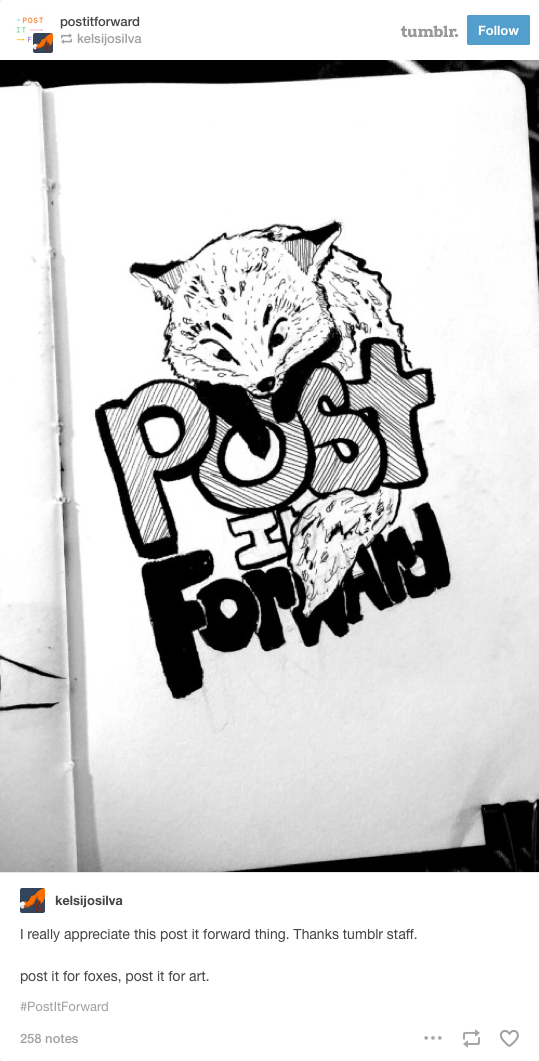 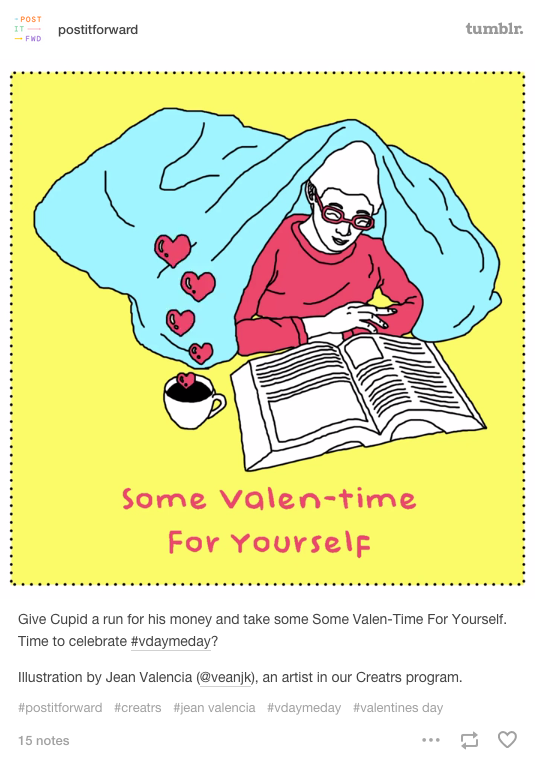