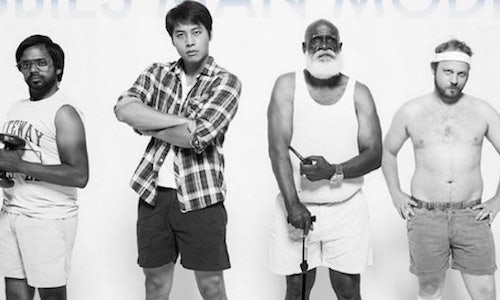 Chubbies, the weekend menswear company known for loud shorts with a bold 5.5" inseam, is a brand built by four friends. It started with one weekend in Tahoe and a backpack full of their first original creation: American flag short-shorts. From there, they built a massive social following by creating the kind of content they would share with their own friends. The goal was — and is — to create genuine, emotional bonds with customers while having a lot of fun at the same time, something not a lot of menswear brands have been able to achieve.

Chubbies thinks of their customers as relatable, aspirational guys. And this got them thinking, "Why can't these guys be the face of our brand?" Men, like women, are bombarded with a particular body type and aesthetic in advertising. But not every guy is a chiseled Adonis. Real guys come in more than one shape. Real guys come in dad bods, lanky bods, faux hawks, and grizzly beards. They're fathers, they're plumbers, they're math teachers, they're… anything, really. It was time for the "Chubbies guy" to represent the diverse awesomeness of the brand's real customers. Now they just had to find them.

Somewhere along the way it was decided for us, not by us, what it took to be a male model. Chubbies sought to change that, using a blend of humor, storytelling, and creative visuals. They put out an open call, asking America to "give us your old, your young, your dad bods yearning to be free..."

The model search served as a way to highlight some of the big personalities, inspiring life stories, and hilarious dudes in their customer base. It also gave Chubbies a platform for engaging with their social audience on a consistent basis with fresh, consumer-focused content. By orienting around body diversity, they were able to address a legitimate issue in a highly positive, celebratory manner; one that didn't make potential contestants and voters feel self-conscious or alienated. Every step of the contest was carefully designed to draw in consumer interest and attention, while also generating thoughtful discussion.

Chubbies offered the 10 winners of the competition a bonafide, two-year modeling contract and a lifetime supply of Chubbies shorts. Chubbies accepted applications within a three-week period from October to November, encouraging applicants to include video and other user generated content. Chubbies narrowed down the applicants to 20 finalists and then used 100 percent public voting to select the final 10 winners. Their original goal was to elicit 500 applications, with a stretch goal of 1,000. In the end, 8,000 people started the application and 2,000 were ultimately submitted.

Chubbies utilized their Twitter, Facebook, Instagram, and email newsletter network (a combined audience of 2 million) to promote the contest website, finalist profiles and promotional videos. In order to cast a vote, people had to share the finalist's profile, which was hosted on the Chubbies website. This resulted in nearly 80,000 total social shares of applicant profiles, with over 500,000 views of the promotional video.

Chubbies' messaging and the traction on social media helped garner interest from reporters at media outlets like .Mic, Maxim, Cosmopolitan and BroBible. Outlets local to the winners' hometowns also covered the contest, grabbing regional audiences. Coverage of the contest included think pieces on body positivity and more lighthearted features on the contest itself. This allowed Chubbies to reach an even greater audience with the campaign and delve further into core issues around body positivity with readers.

Chubbies was overwhelmed by the sheer amount of hilarious, creative and inspiring content applicants sent in. From videos to photo shoots to personal stories, Chubbies received a wealth of content from applicant profiles for use on their site, in the model gallery and across their brand social channels. Well before winners were even chosen, this trove of authentic content achieved two of their main brand goals: give guys a brand they can emotionally connect with and have fun doing it. It also fulfilled one of the core objectives of the campaign, in that it showcased the body diversity and overall spirit of the Chubbies customer.

Chubbies took applications for the Man Model Search from October 20 through November 9, raking in 2,000 completed submissions and over 500,000 unique visitors to the contest website.

By creating and sharing humorous, easily-digestible content, Chubbies was able to gain significant traction on social channels — accomplished during a traditionally slower time of the year for warm weather clothing brands. They saw over 40,000 Facebook shares of the male model profile pages during the first round of voting and 36,000 shares during the final round of voting, bringing the total social shares of model profile pages alone to nearly 80,000. The video ad promoting the contest garnered 568,926 views on Facebook and 6.7K likes, shares, and comments. The total social shares for this campaign had a combined reach of 50 million. The story resonated with press resulting in 13 million additional impressions.

Ultimately, The Chubbies Man Model Search was successful in its goal of identifying the people and stories that exemplify authentic, relatable, and inspiring men. The 10 winners included a stay-at-home dad of four, a veteran, a member of an all-male dance group, an art teacher, a college student, a chauffeur, a craft beer expert, a swim teacher, and more. These are real guys with real lives and a hidden talent for posing in short shorts. 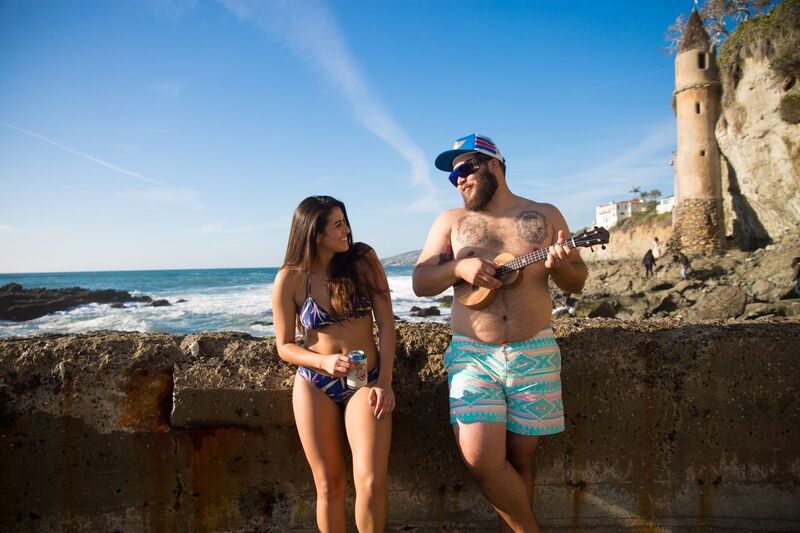 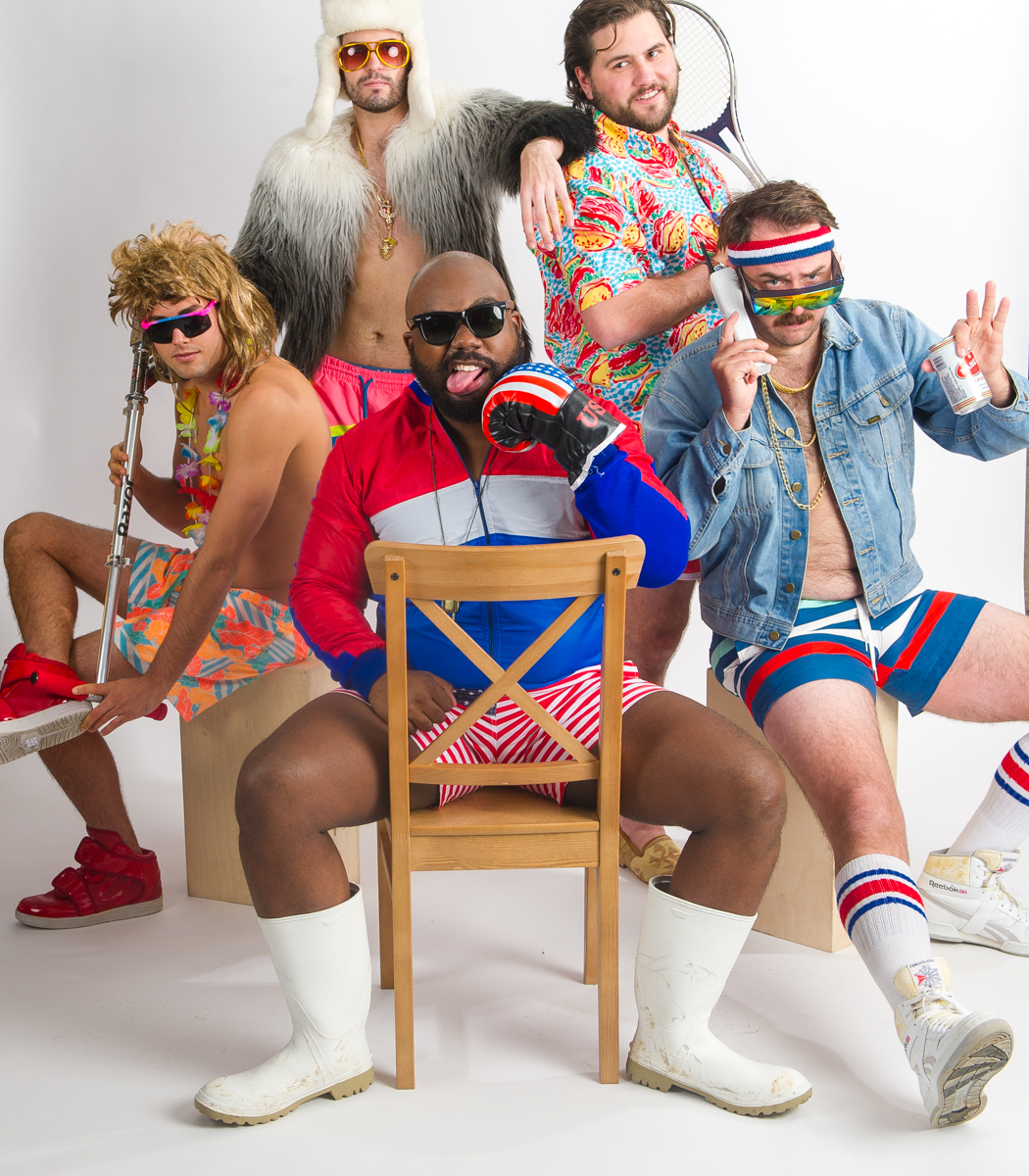 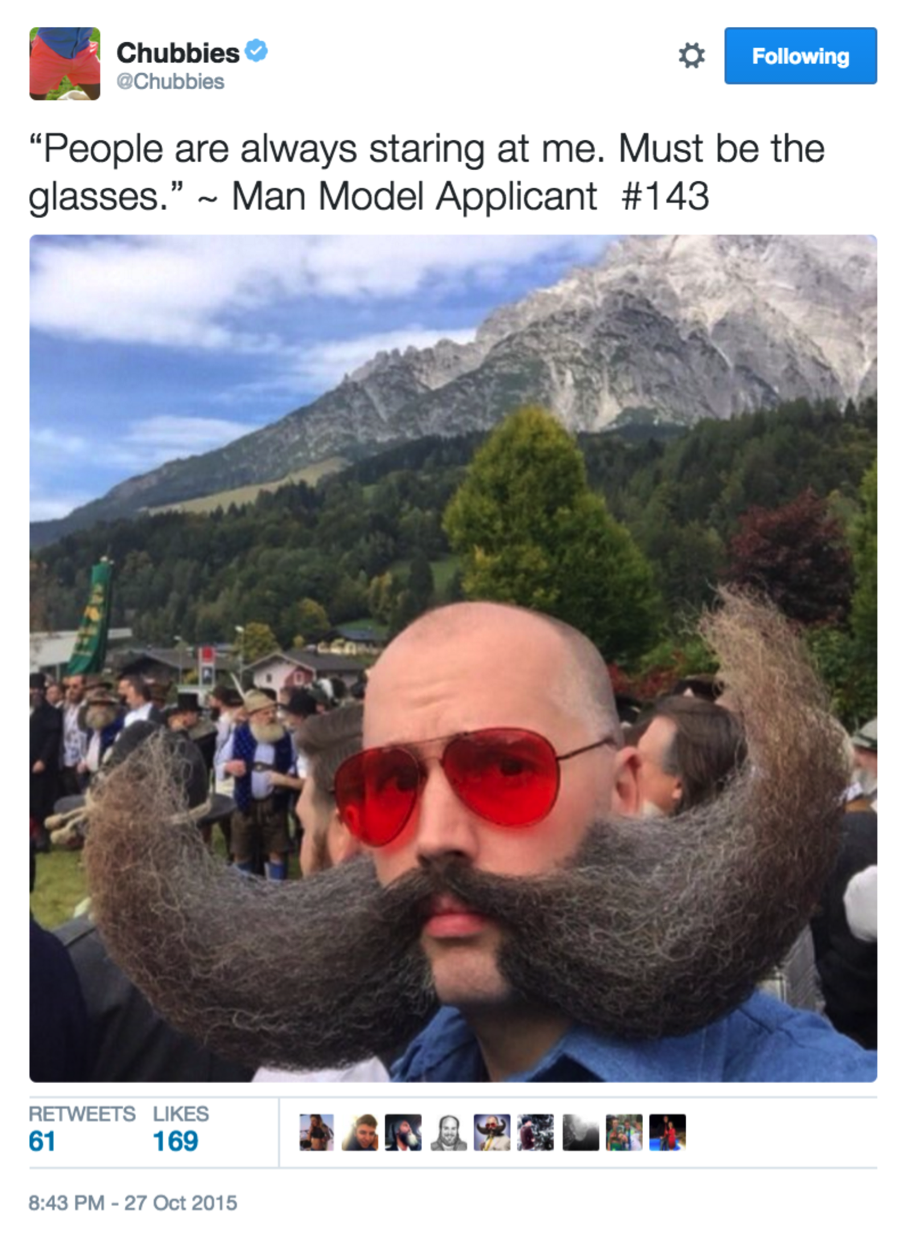 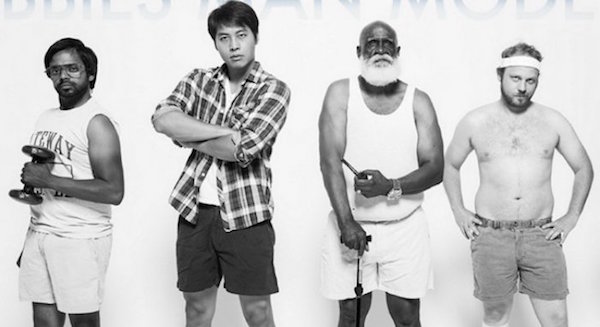