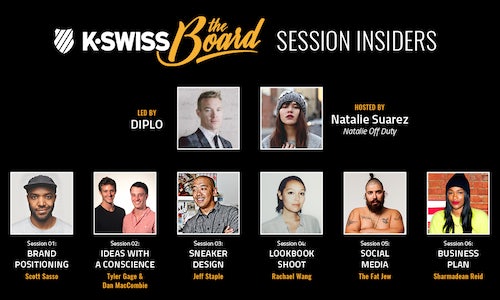 K-Swiss is a heritage American sneaker brand established in 1966 that's known for one of the most iconic sneakers of all time, The Classic. With stylish shoes and an aging audience, K-Swiss saw an opportunity to engage with entrepreneurial Millennials. K-Swiss knew they had to make a bold move, and The Board campaign was the launch of their entrepreneurial revolution. It all started with a simple insight. Today's Millennials aspire to be a new kind of superstar—an entrepreneur. With that in mind, the K-Swiss Board of Directors campaign was born—an "influence the influencers" approach designed to let Millennials reset the brand themselves. Campaign goals included increasing brand relevance while decreasing negative sentiment and relaunching the brand online.

After a six-week application process that garnered more than 8,000 applicants from around the world, electronic music artist Diplo and a group of celebrity insiders led 100 chosen applicants (The Board) through a series of assignments that would reshape the K-Swiss brand. Hanson Dodge Creative brought the campaign to life using a multi-platform approach with an emphasis on the power and influence of social media.

At the crux of the campaign, six celebrity influencers participated in the program as "insiders," each leading a session including a social task for The Board members to complete. Hosted by Natalie Suarez, these sessions helped drive reach, increase positive social sentiment and reshape the brand for today's Millennial entrepreneur.

Session 01: Brand Positioning: Led by Scott Sasso founder and designer of streetwear label 10.Deep. Board members wrote a new tagline for K-Swiss and the winner with the best tagline was paid for its usage rights.

Session 02: Ideas with a Conscience: Led by Tyler Gage and Dan MacCombie, co-founders of Fair Trade Certified™ beverage company Runa. Board members designed a K-Swiss give-back program promoting a cause, and one winner helped implement the experience.

Session 03: Sneaker Design: Led by Jeff Staple, Founder of STAPLE + REED SPACE. Board members had the chance to design a sneaker. They choose custom colors, graphics, materials and trim. The winner's shoes are being created and sold in 2016.

Session 04: Lookbook Shoot: Led by Rachael Wang, Fashion Market Director at Style.com. Board members learned how to create images that are on-brand and make an impact.

Session 05: Social Media Best Practices: Led by The Fat Jew. Board members learned social media tips on how to stand out from the crowd. They submitted suggestions for an Instagram strategy and winners took over the @KSwissOfficial handle for a day.

Session 06: Writing Your Business Plan: Led by Sharmadean Reid, brand consultant, stylist and entrepreneur. Board members learned tips about writing a business plan that investors can't ignore. Board members submitted their ideas and the winner's plan will be brought to reality in 2016.

What started as a design and technology project became an integrated social marketing campaign that reset the K-Swiss brand among a Millennial audience. K-Swiss' The Board was covered by scores of media and received over 180,000,000 impressions in social and digital media. The Board application website received more than 350,000 visits; there were 883,209 views of the Diplo application video; 50% of web traffic was mobile and 90% was within the target demographic of Millennials. The campaign engaged more than 200,000 consumers, and during the campaign, K-Swiss received 40% social community engagement.

Each session was highly attended and produced impactful lessons for the 100 members of The Board. Participation in the tasks and engagement surrounding winners was higher than K-Swiss had ever seen. Communication channels included Facebook, Twitter, Instagram, Reddit, YouTube and online video platforms. This content reached entrepreneurial-minded consumers and helped spread the word about K-Swiss and its mission.

Negative social sentiment decreased by three points in just six weeks. In addition to 8,000+ global applicants, the campaign received 87 "extra credit" videos during the application process from engaged Millennials who expressed interest in joining The Board. Social posts from Diplo and the celebrity insiders drove influence on the K-Swiss community and contributed to the 43,000,000 social impressions garnered during the six-week launch period. While in session (after the application period), The Board reached 70,000,000 people on social media and increased the K-Swiss social community size by 123%, to over 600,000.

Video for The Board 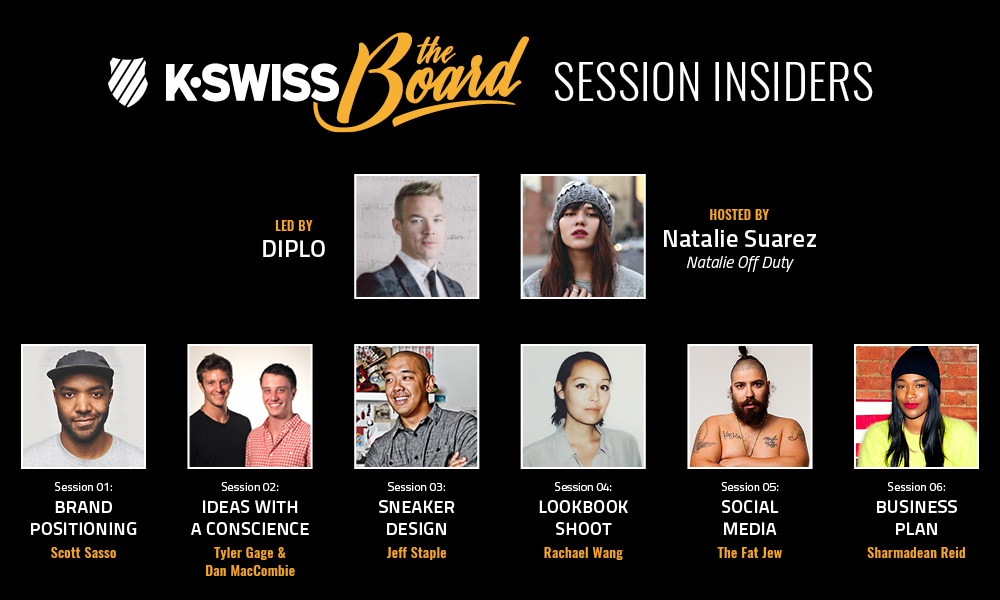