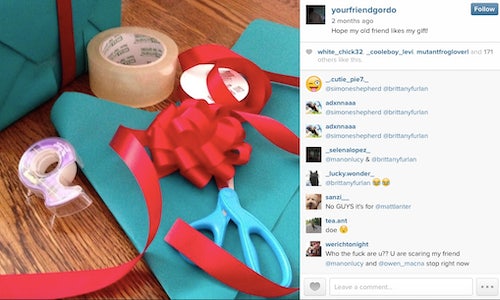 STX sought to create intrigue and excitement leading up to the premiere of their first major motion picture. The thriller 'The Gift' centers around a forgotten high school friend, Gordo (Joel Edgerton), mysteriously coming back into the life of a former classmate (Jason Bateman) with a series of mysterious and personal gifts.

The studio wanted to engage film press in a more interesting way and tasked us with evoking those unsettling feelings of your past coming back to haunt you, bringing the film's central theme to life. STX had us playfully and lightly stalk key press and influencers, looking over their social channels, and delivering a gift related to something they posted about months or even years ago. We also engaged the influencers further by sending some chilling tweets and comments their way from the handle @YourFriendGordo, the main character from the movie. It made for some memorable outreach and resulted in interesting write-ups and interviews leading up to the film's release. It doesn't hurt that STX made a fantastic movie to write about.

STX Entertainment asked us to scan the social profiles of 44 key influencers (27 writers/editors, 7 iHeart Radio DJs, and 6 top-tier social influencers) for little-known and off kilter facts about them, such as their hometown, high school, part-time summer job, favorite candy, last vacation spot, etc.

Armed with personal and publicly available information about their past from their social channels, we bought highly personalized gifts for everyone on the list, eliciting that same unnerving feeling from the movie. The first "token of friendship" gift was sent with a handwritten note. Each note was mysteriously signed by @YourFriendGordo, the main character of the film, and the gifts were wrapped in peacock blue paper and tied with a red bow, matching precisely the imagery of the gifts used in the film's poster key art.

Press and influencers received their gifts the day before the film's trailer was set to launch on Twitter and iHeartRadio via Periscope. Shocked recipients, perplexed and with their eyebrows raised, took to social media to engage in online conversations with their new friend, Gordo.

@BradyRadio: "Kinda creeped out. Anyone know who @YourFriendGordo is? Got a package from him 2day. Knows about my 6th bday party."

@YourFriendGordo: "@BradyRadio Quit playing, I was there for your 6th birthday! You really don't remember? "

@YourFriendGordo: "@firstshowing Creepy? I guess it's been so long since we've seen each other."

A second gift was delivered two days later (also in peacock blue and sealed with a red wax "G"). These packages contained printed photos from the targets' social media accounts, accompanied by another handwritten note from their "friend" Gordo. The big reveal was triggered in this last mailing, with a metal key-shaped flash drive, which held the trailer for the film, creatively unveiling Gordo's identity and the marketing campaign's premise.

Influencers took to social media to share their chilling gifts with their followers. We tracked their posts online and engagement with @YourFriendGordo. Of the 44 influencers who received gifts, 91% engaged with us online. During these few days there were nearly 9K tweets about "The Gift" movie with a combined 109M followers.

The incorporation of social influencers from Twitter, Vine, and Instagram yielded 2.3M views, 37K fan engagements, and 95% positive sentiment expressed online. Positive press coverage for "The Gift" was featured on nearly 500 sites including: Variety, People, Fast Company, The Hollywood Reporter, E! News, among many others (in just 5 days), with a combined reach of 245M readers. Traffic driven to the film's trailer on YouTube generated a total reach of 188M and an estimated media value of $2.8M. The film, which cost $5 million to produce went on to gross nearly $44 million in North American box office receipt – a big success for STX, which received a great deal of attention for the innovative way they marketed their first movie. 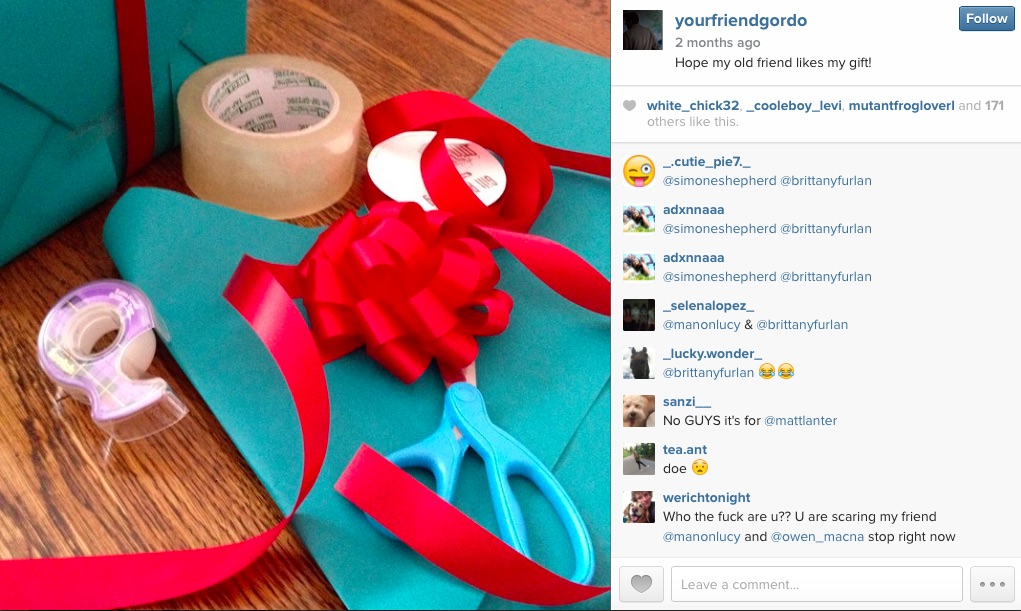