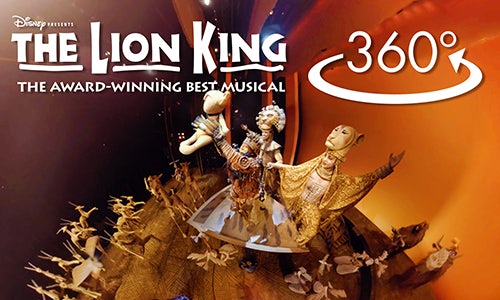 Step Into the "Circle of Life" - The Lion King VR Experience

Now in its 19 th year, THE LION KING remains ascendant as one of the most popular stage musicals in the world. Since its Broadway premiere in 1997, 22 global productions have been seen by more than 80 million people and, cumulatively, run a staggering 132 years.

On Broadway, THE LION KING continues to rein number one at the box office, claiming the top spot in 2015 for the third consecutive year. Despite sold out performances, the marketing group works to find new ways to engage past, present and future audiences. So in 2015, when virtual reality and 360-video hit the masses through Facebook and YouTube, Disney Theatrical Group identified the technology as an opportunity to achieve two goals.

2. Break outside the Broadway box through pairing THE LION KING with technology focused messaging.

The end product delivered a virtual reality experience of "Circle of Life" taking viewers on stage to be completely surrounded by 31 cast members, and 20 feet in the air as Pride Rock rises to present Mufasa, Rafiki and baby Simba. The technology enables viewers to choose where to look at every point, inviting repeat viewings of the video to take in every possible angle.

Unlike most virtual reality captures of landscapes, sporting events or concerts, THE LION KING's creates a fully immersive performance of "Circle of Life" from the actors' point of view and see activity otherwise invisible to an audience. The approach of capturing the number exactly as seen on stage required the consideration of three core principles.

Creative Integrity: Showcasing such a beloved property like THE LION KING in this new media meant the including team members that maintain and uphold the production around the world. Stage management, company management, choreographers, sound engineers and lighting designers were all consulted from the start to guarantee the number could indeed be captured and experienced in virtual reality without losing the essence and power of a live theatre performance. With the participation of this team, viewers are truly seeing a non-compromised performance of "Circle of Life" from within.

Camera Blocking: VR production company, Total Cinema 360, lead the direction of the piece and were tasked with determining the best way to depict "Circle of Life" in 360°. Due to the large scale of the number, the team made cuts within the video to give multiple points of view in real time. This is rarely done in virtual reality pieces, however reaches new levels of possibilities for VR. To achieve this, the number was performed 5 ½ times, moving the camera from one position to the next.

Audience Participation: A live theatre experience would be nothing without its audience, and theatre in VR is no different. An invited audience of over 1,000 guests were welcomed into the Broadway theatre for the recording of the number. They are as much a part of the final piece as the actors themselves and viewers can spin to see what it feels like to perform for a packed house.

Once complete, a solid distribution strategy was essential in order to achieve the two established goals. To break out of the Broadway box, Disney Theatrical paired with Wired.com to debut the video. This positioned the piece not just news for Broadway fans, but a breakout piece in the technology arena as well. Then, just a few hours later, the piece was released on five video platforms including; Facebook, YouTube, Samsung Milk VR, Littlestar and Vrideo. This wide distribution was a first for VR/360 video and maximized early reach of the video.

In it's first month, the video was viewed over 1 million times across the five distribution platforms, and continues to see a healthy long tail engagement on YouTube. And while the numbers of views shows excitement for the piece, the press pick up is the true story of success. The initial press release took THE LION KING out of the traditional Arts and Entertainment section and into Business and Technology forums around the world, repositioning the 18-year-old property in a new and exciting context.

For the 80 million people who've experienced the THE LION KING in person, the VR video reminded them of everything felt when first seeing "Circle of Life", reigniting their love for the stunning artistry, unforgettable music and exhilarating choreography. And for those who haven't seen the production, the video brought the magic of Broadway into their hands, in the hopes of igniting a new love for live theatre. 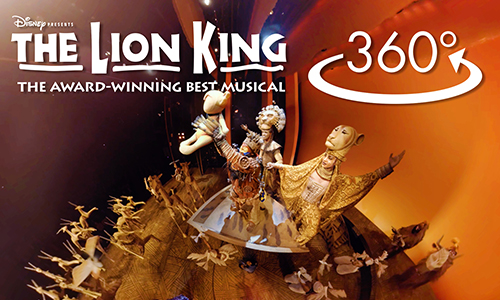