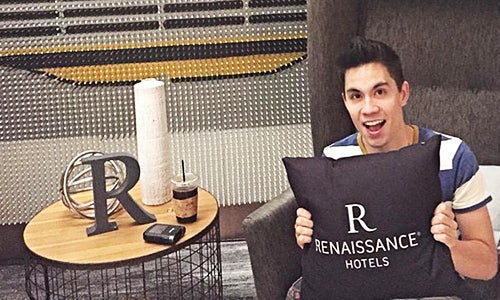 At Renaissance Hotels, it's business unusual. We're on a mission to defy the conventions of business travel for those who crave unexpected experiences. We host live events in our hotels worldwide to help guests discover emerging talent in music, food, drink, and the arts. To show our support for the music community and promote awareness of our brand, we wanted to reach an audience of next-generation travelers through an influencer. We tapped YouTube star Sam Tsui, a musician with 2+ million followers known for his creative mash-ups of pop songs, to take over our Twitter channel during the Lollapalooza music festival in Chicago. He produced an original music video at the Renaissance Chicago Downtown Hotel featuring an original song "Unexpectedly" for the Renaissance Hotels YouTube and social media channels, as well as a two-part travel vlog for his own YouTube channel. Our goal was to cross-promote his unique content to both of our audiences and show how business travel is different when you stay at a Renaissance hotel.

Sam Tsui took over the Renaissance Hotels Twitter feed during the Lollapalooza festival in Chicago July 31-August 2. Each day, he announced the takeover to his fans before live-posting 6+ photos and videos on the Renaissance Hotels feed with the takeover hashtag, #SamTsuiTakeover. The tweets were full of personality and included a mix of bright photos and videos. Tsui stayed at the Renaissance Chicago Downtown Hotel as his home base for the festival weekend and live-tweeted his experience as a hotel guest, a Lollapalooza attendee, and Chicago visitor. We hosted the VIP Music Lounge After Party Powered by Billboard at the hotel, which Tsui also attended. Working with our media agency, MEC, we gained whitelisting access to Tsui's Twitter account to promote his tweets with paid media, boosting reach and engagement.

Tsui created two travel vlogs to live on his YouTube channel, which prominently featured the property and on-brand points of interest such as Millennium Park and a Chicago-style hot dog stand. Tsui created one music video to live on Renaissance Hotels's YouTube channel featuring the as-yet-unreleased Sam Tsui original song, "Unexpectedly." Tsui had creative freedom with the video concept and totally delighted us with his use of the hotel space, turning items like the room key, wineglasses, clothes hangers, phone buttons, bar menus, furniture, and running water into a visually intriguing percussion line. Tsui explored the hotel room, balcony, front desk, and lobby area to show off our design aesthetic and incorporate subtle branding, such as a Renaissance Hotels pen. The video is authentic to Tsui while highlighting key points of our brand and travel philosophy. At the end of the YouTube travel vlogs, Tsui links back to the Renaissance Hotels music video with an annotation; at the end of the music video, Renaissance Hotels links back to Tsui's travel vlogs with an annotation.

Sam Tsui's social media posts reminding his fans to follow his takeover on the Renaissance Hotels Twitter channel were instrumental in driving new followers for Renaissance Hotels on Twitter & Instagram. The Twitter takeover generated 2.4 times the engagement of a typical weekend. Tsui's takeover tweets for Lollapalooza were able to build reach organically via his own social following who were sharing his tweets with a higher frequency compared to typical @RenHotels tweets. The music video and travel vlog at the Renaissance Chicago Downtown Hotel drove 347,000 total video views on YouTube, Facebook, and Twitter. The music video content surpassed the video views benchmark on Twitter by 120%. We used a clip of the video in an Instagram ad and it exceeded our video view rate goal thanks to its unique concept and vibrant look and sound.

Video for Sam Tsui at Lollapalooza for Renaissance Hotels 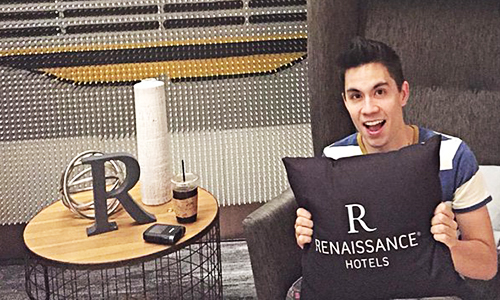