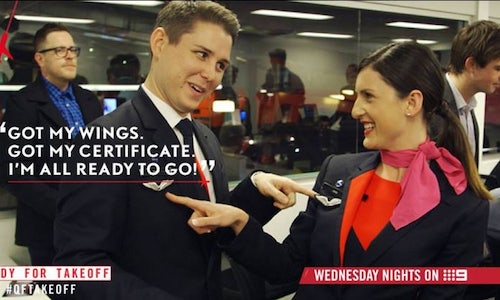 There's a lot that goes into moving 50 million people all around the world, and that's what we wanted to show viewers when we released a ten-part entertainment documentary series that takes you behind the scenes of Qantas called Ready For Take Off. After a tough few years for the brand, we've managed to regain some of the respect we'd lost, but wanted to further the progress of the brand. Namely, we wanted to change the narrative when it came to Qantas, muster pride among employees, and help our fans reconnect with the Qantas they know and love by giving them an authentic view into the people that help the company thrive and a behind-the-scenes look into what Qantas does each and every day. While the TV show itself covered those goals, we knew that by creating an innovative social campaign that coincided with the show, we'd be able to reach more people, interact better, and help rekindle the public's affection for an iconic Australian brand.

When our viewers turned on their TVs to watch Ready for Take Off, they could see how a broken engine gets repaired, the nerve-wracking experiences of first-time flight attendants, and what happens when there's a medical emergency during a flight. After each episode, viewers were craving more. Luckily, we had a plan in place to give them more -- on our social channels. We wanted to engage customers and viewers by posting extra scenes, funny moments, and additional content.

To begin our integration with the show, we started with a paid social media tease before the show was released. We then created a plan that made a viewer's experience from their TV to their social media channels feel seamless. To do this, we perfectly timed all of our Facebook and Twitter posts to align with what was happening in the show in real time. Our promotion period was nine weeks, and each week we posted before, during, and after the episode-- a grand total of 169 posts. We incorporated three main types of posts into our plans. The first type included a still shot from the episode with an overlay of an interesting or funny quote, and the second type featured videos that extended the storylines from the episode. For example, one episode featured two Qantas catering truck employees for only a few minutes, but we knew that viewers would want more of their story, so at the moment the TV show moved on to another scene, we posted a video of the catering truck employees that picked up right where their story left off on the show. By doing this, we allowed viewers to move seamlessly from TV to social, finding out more about the storylines that interested them, and also giving them the chance to really appreciate the interesting characters and behind-the-scenes scenarios that appeared in the episode. Our third type of post were preview and wrap-up videos, which we posted before and after each TV episode. Our audience loved having a sneak peek into the night's episode, and shared all of their thoughts with us on the summary videos.

As an add-on to our Facebook and Twitter strategy, we decided to Periscope from Qantas Headquarters in Sydney when our first episode went live. We held a big party for employees to view the show, and we had three team members who had worked on the show go live on Periscope each commercial break, telling our viewers what they thought of the show so far, answering questions, and chatting about the people they knew who had appeared in the show. This again allowed our viewers to move from their TV to their social media channels to get more content.

Our strategy to move seamlessly between the TV show and social channels worked really well, and that's highlighted by the amazing results that came from the integration.

While the TV audiences peaked at 1 million, we reached a further 6 MILLION people online with our social media strategy, and sentiment was incredibly positive. Our hashtag #QFTAKEOFF was used 747 times throughout the promotion period, and our Facebook posts had an average of 748 interactions. Our premiere video post generated 6,004 interactions and 3,859 likes, and our Facebook posts were regularly our highest performing posts of the week, reaching over 600K, 700K, and several over 1M. Engagement on Ready for Take Off posts was consistently double that of other Qantas posts.

Our short Periscope sessions during each ad break reached 150+ in any one broadcast. People were engaged, asking questions about the event at headquarters, about the show, and about Qantas in general. The sentiment was positive toward Qantas, Ready For Take Off, and our team member hosts.

By pairing a social media plan with our TV series, we were able to give our viewers the content they craved. We gave them extended storylines, entertaining quotes from characters, and a seamless experience from TV to social media. 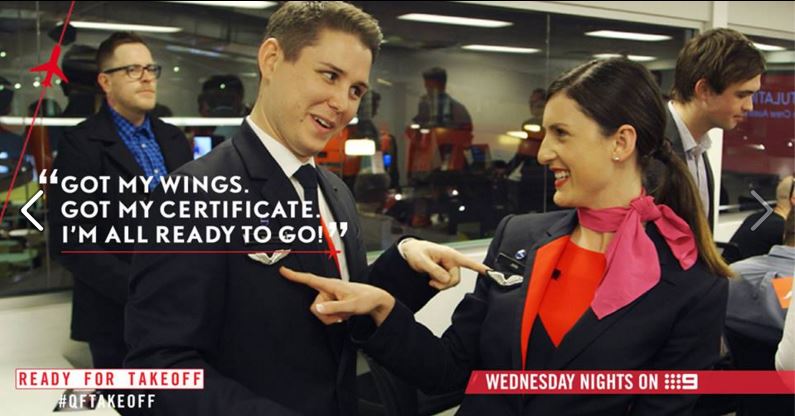 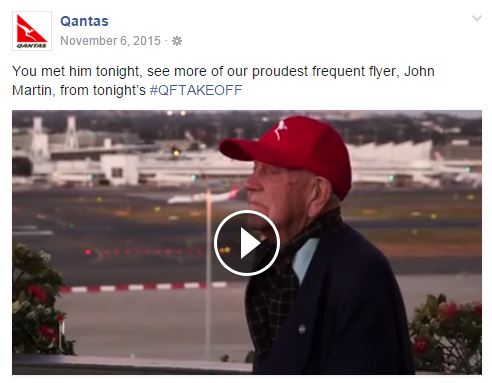