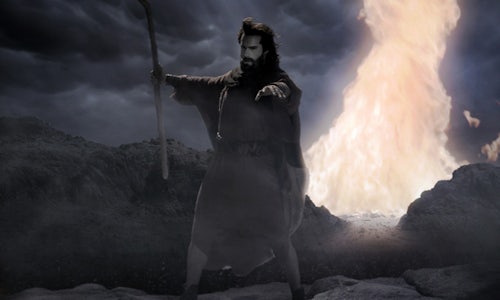 Os Dez Mandamentos (The Ten Commandments) was the biggest TV phenomenon in Brazil this year. It was, basically, a soap opera of almost 180 chapters that ran during almost the whole year, about Moses and his saga, from the beggining to the scape of Egypt. It was the most impactant TV show, that made Rede Record, the 2nd biggest TV channel, beat the leading broadcaster and rose to become the most popular show during our prime time.

Our goal was to build a digital strategy to boost even more that phenomenon, with an edgy gameplan. Could Os Dez Mandamentos become a social media avalanche, such it was becoming on TV - even it being a biblical production, (teorically) with less appeal amongst younger audiences and social media platforms? We managed to reach that goal. And we'll show you how.

Os Dez Mandamentos ran through March to November 2015. Therefore, a lot was done that time. But there are some key points to it. First of all, we had the cast supporting us all along, tweeting during the airing (of all the 176 episodes) and keeping the hashtag onscreen for all of them, calling fans to action on Instagram and Facebook - and that interactivity was crucial for the product to be a success.

Than came in our digital strategy, that managed to achieve very daring goals. Summarizing, we had special strategies for key events, such as the #MarVermelho (Red Sea) strategy, which was the big climax of the story; and occasions such as the downfall of the major villain, Yunet, with hashtags and gameplans that designed it to go viral, or the ten plagues, that ran for almost a month. 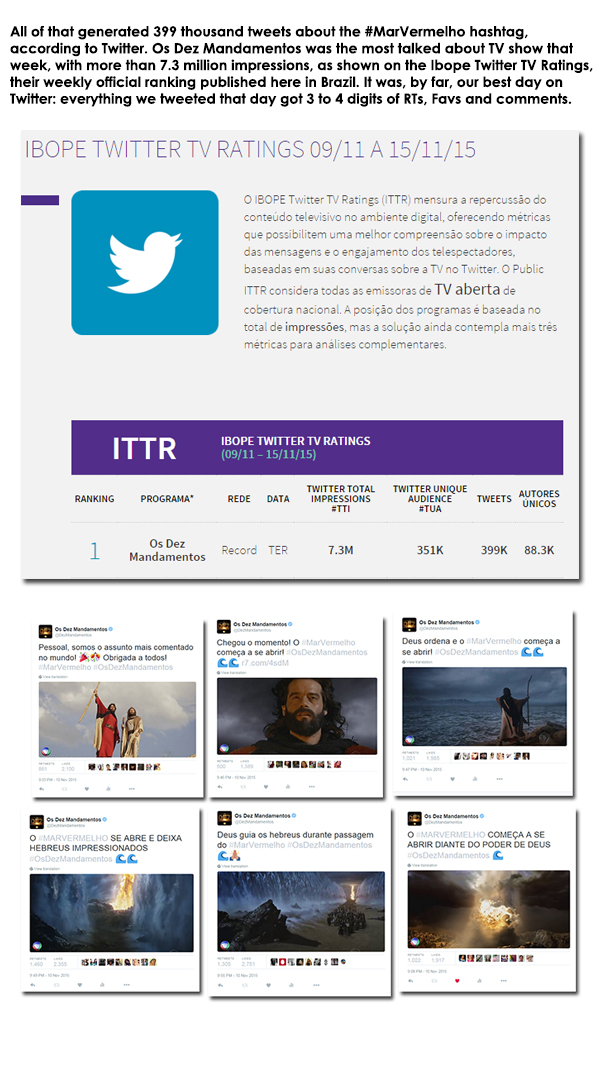 We created special events to raise engagement in other ocasions, such as the hashtags for Yunet, our villain, and the Plagues, cited above: 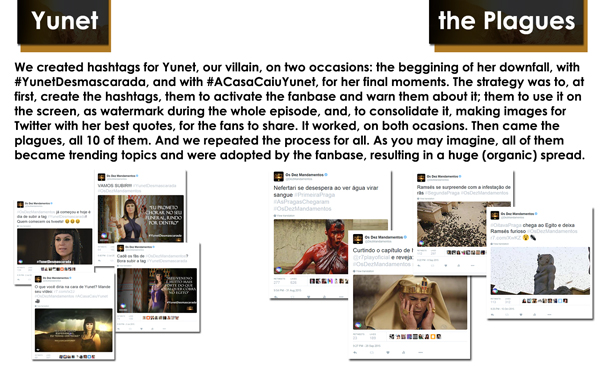 Our social media approach was vital. We live tweeted the show during it's almost 180 chapters, always engaging with fans. Our Facebook page came from scratch and became a phenomenon as well, now with 3 million fans. The official website is a part of that digital strategy as well, with all of our plataforms and profiles disseminating exclusive content, making of, interview with the cast, and video on demand. Even a paid YouTube channel was a part of the whole strategy, and Os Dez Mandamentos channel was the major traffic driver inside our R7Play, our subscription VOD platform.


A strong management of the fanclubs and the fanbase as a whole were crucial to make it happen - and we had them at our disposal whenever we wanted to make something happen or get viralized. Their engagement got to be awarded in the end, with our Os Dez Mandamentos "social awards" for the fans at the very last episode, with the best meme, best fake, and so on. We also did a live streaming "social TV" with two members of the cast, during the breaks of the final episode, on our official website (where people could join by social login and talk to them).

So, for the finale, we made: 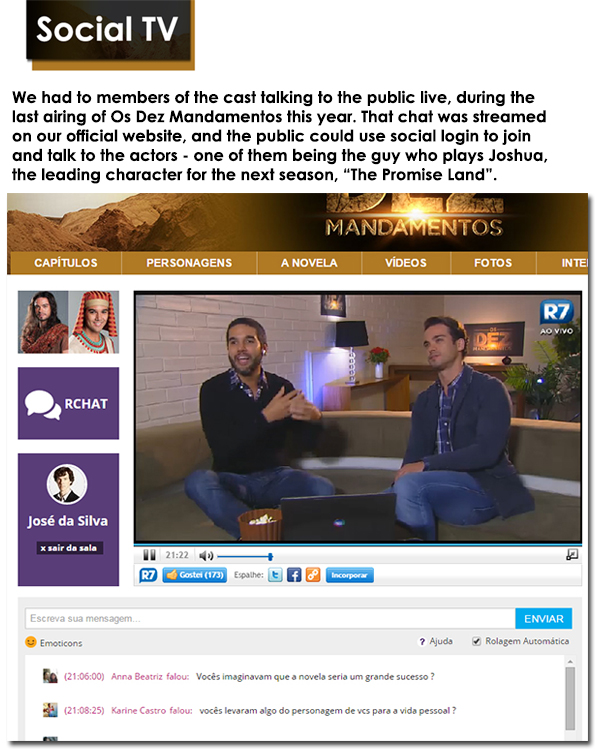 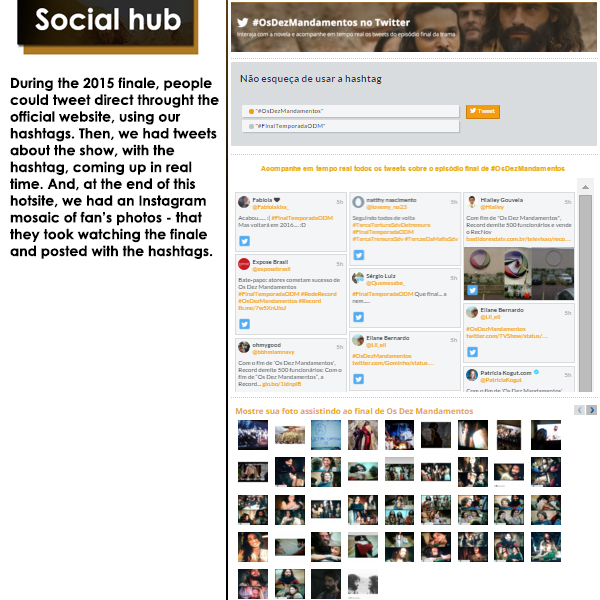 On TV, Os Dez Mandamentos managed to do what wasn't done since the 1990s: beat the leading broadcaster in Brazil, Globo, beating it's huge level of audience, with 40% of share during the Red Sea opening scene.

We got WorldWide Trending Topics, more than once. We led the Twitter official weekly TV ranking as well. Only during the #MarVermelho Twitter autoreply, we managed to send almost 100K videos during a bunch of hours. That night alone, we had 400K tweets about the show.

But, this year, was by far the biggest TV phenomenon in Brazil. And our Facebook page, that wasn't even our main platform, has 3 million followers, starting from scratch - which is bigger than, or at least the same size of - many important and relevant Facebook pages across the globe.

We managed to do what few did: to grab the lead of the prime time TV in Brazil and change it's course. And social media and digital platforms had a key role in it, bringing together different generations and creating a product that was watched, talked about and relevant to different ages, religions, cultures, social and financial classes.

The success was such that Os Dez Mandamentos will become a movie on February 2016 and, on the next month, return for a second season, telling the story of Joshua and the promise land. 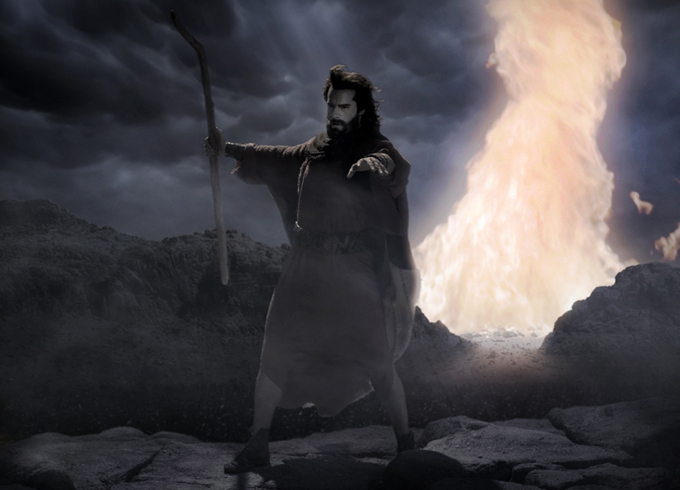 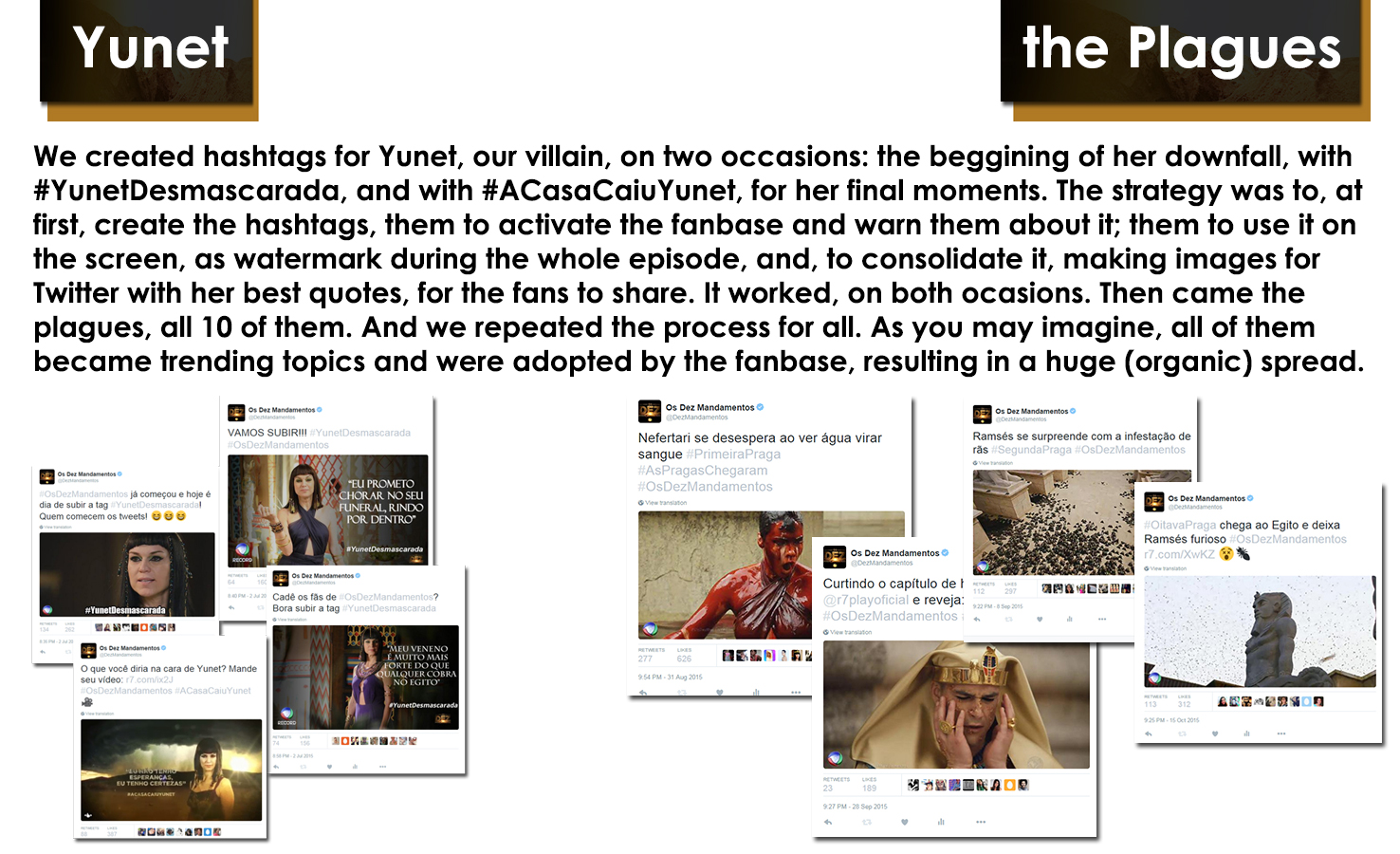 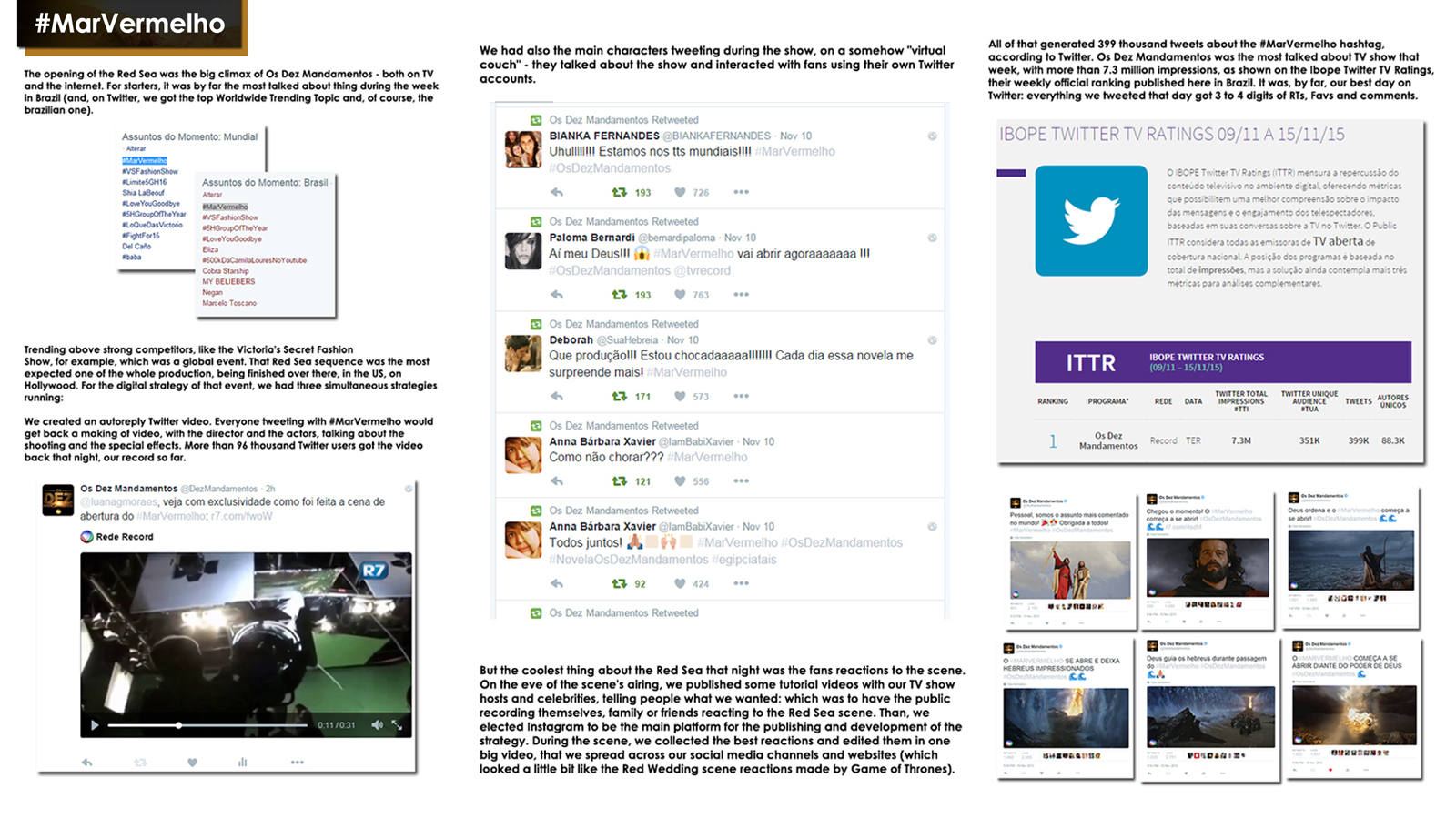 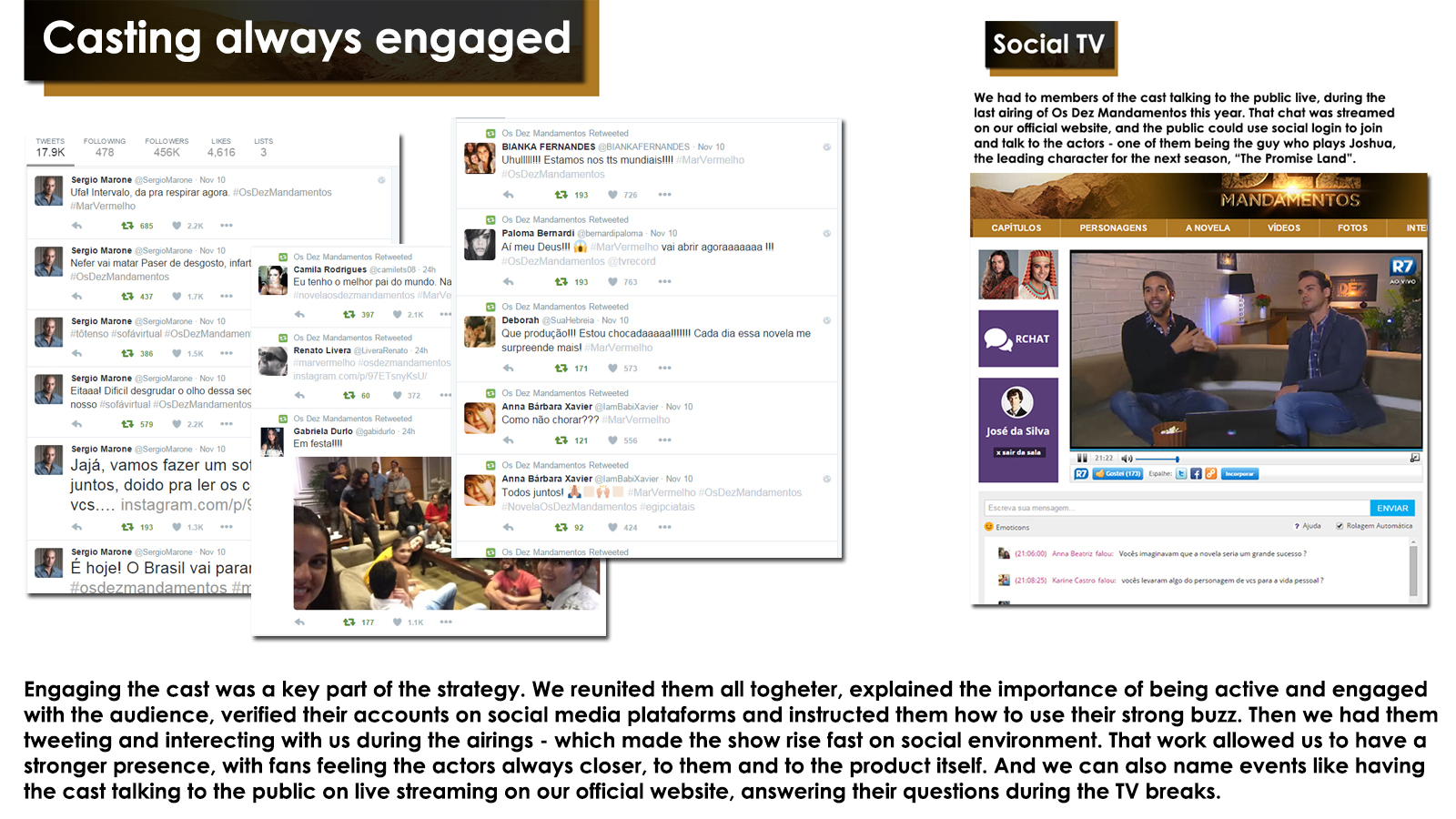 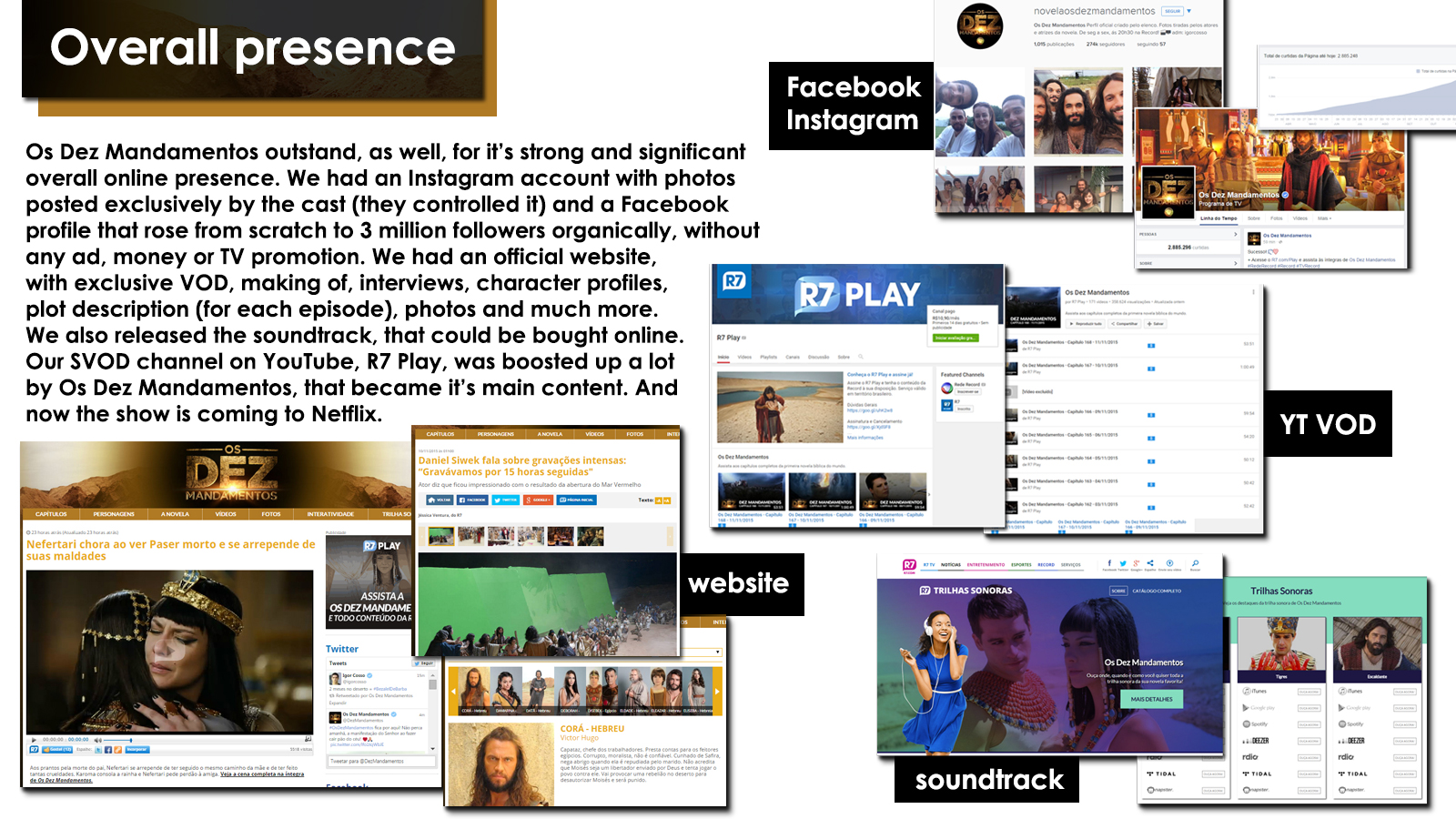