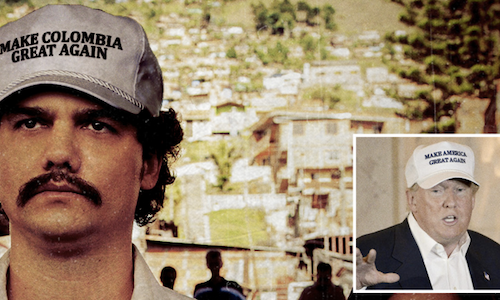 Netflix's Narcos social campaign, the objective of real time responses was to keep fans of the show talking about it even after they'd finished binge watching it. In our overall campaign, we selected thematics from the show that were most relevant to our audiences: moral ambiguity, excessive wealth, and cocaine culture. With our star, Pablo Escobar, having roots in the political world in the show, we kept our eye on the early stages of the Presidential election to see when we could chime in. We noticed a tie between the moral ambiguity thematic from our show and the deep societal rift that Trump was causing in the social sphere. The first Republican debate proved to be the perfect opportunity for us to make a statement.

In first Republican debate, Donald Trump was outspoken as ever. We knew the Internet would be on fire in reaction to this - and because of Escobar's own political aspirations, the election felt like a relevant moment to join the conversation. We also knew it had to be done in a subtle way to maintain a dark, yet quality piece of social content in line with the show and the Netflix brand. To do this, we selected a key indicator of Trump: his campaign hat with the line "Make America Great Again". We put the hat on our our Presidential hopeful in the show: Pablo Escobar, and altered it to say "Make Colombia Great Again". With that simple headshot-style photo, which we treated to be visually cohesive with the campaign. We used a relatively open-ended caption so our audience could attribute their own meaning, which helped support engagement. It also tried back to a key line from the show's take on Colombian's invention of magical realism: "Some things really are too strange to believe" which we paired with the event hashtag #GOPdebate to increase searchability and a connection to the moment.

Our Make Colombia Great Again post was among the top engaged Instagrams using the #GOPdebate for the first Republican debate. It earned nearly twelve thousand likes and fifteen hundred comments on the instagram post alone. We made a statement about Trump's and Pablo's similar moral ambiguity, and subtlety poked at the irony of the Trump's political message. As fans were sharing the image, using it as their profile picture, designing shirts from it, and using it to respond to future content, we knew we'd created a tool for our audience to make their own statements.