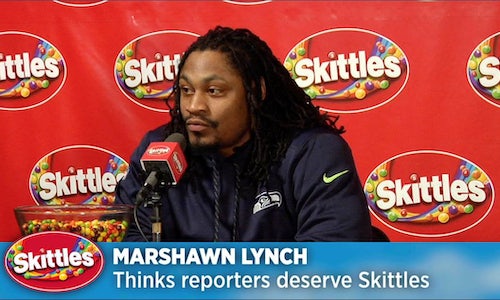 Aside from being the Seattle Seahawks' best player, Marshawn Lynch is widely known for two things: (1) Loving Skittles, and (2) not cooperating with reporters. Lynch has been synonymous with Skittles ever late 2011, when cameras caught him eating them on the sideline of a nationally televised game. Seahawks fans promptly embraced Skittles as their own symbol of celebration, throwing them on the field after touchdowns. During the 2015 NFL playoffs, however, Lynch's volatile relationship with the news media was an even bigger story than his candy crush. After being fined for refusing to answer media questions, he'd taken to conducting interviews repeating the same response for every answer, frustrating reporters and fascinating many fans.

Skittles, for its part, purchased ad time during the Super Bowl during the previous summer and had spent months building a robust plan to maximize value from the investment, including media outreach, point-of-sale activations and a significant digital-media buy. But the Seahawks surprise return to the game was too good an opportunity for the brand to ignore, even if it only had two weeks to act.

The campaign's objective was to leverage its association with Lynch to claim a larger share of the conversation around the Super Bowl, and to boost sales in the process.

Lynch was in the news for avoiding reporters and has long been synonymous with Skittles, so the brand sought to fuse those two huge stories in a way that injected itself into this very large conversation.

We created a Skittles Press Conference, in which he candidly answered every question the famously offbeat brand asked. The video was conceived, cast, filmed and edited in less than a week. Release was planned for the evening prior to Super Bowl Media Day, for two reasons: (1) Media Day is an enormous spectacle of soft news, in which thousands of reporters descend on the players in search of anything new to cover, and (2) whether Lynch would answer questions was the biggest media storyline entering the day.

We posted the video to YouTube, Facebook and Twitter at approximately 9pm eastern on the evening before Super Bowl Media Day, immediately alerting contacts at sports outlets with track records of pushing content viral, including ESPN, USA Today FTW, Sports Illustrated and Bleacher Report, which all posted quickly. The video went viral almost immediately, with the FTW piece alone being shared 440,000 times, according to the site's counter.

Marshawn's Media Day performance, which consisted of him answering every question with the phrase "I'm just here so I won't get fined," took the story further: Skittles wasn't only leading Today Show segments on the best Super Bowl "ads," but it was also featured in pop-culture outlets such as Saturday Night Live and Conan. The story got so big that the Super Bowl broadcast itself opened with a shot of Marshawn eating Skittles on the sideline, narrated by announcer Al Michaels. All that attention helped Skittles dominate the Super Bowl conversation without releasing its actual Super Bowl ad until it aired during the game. 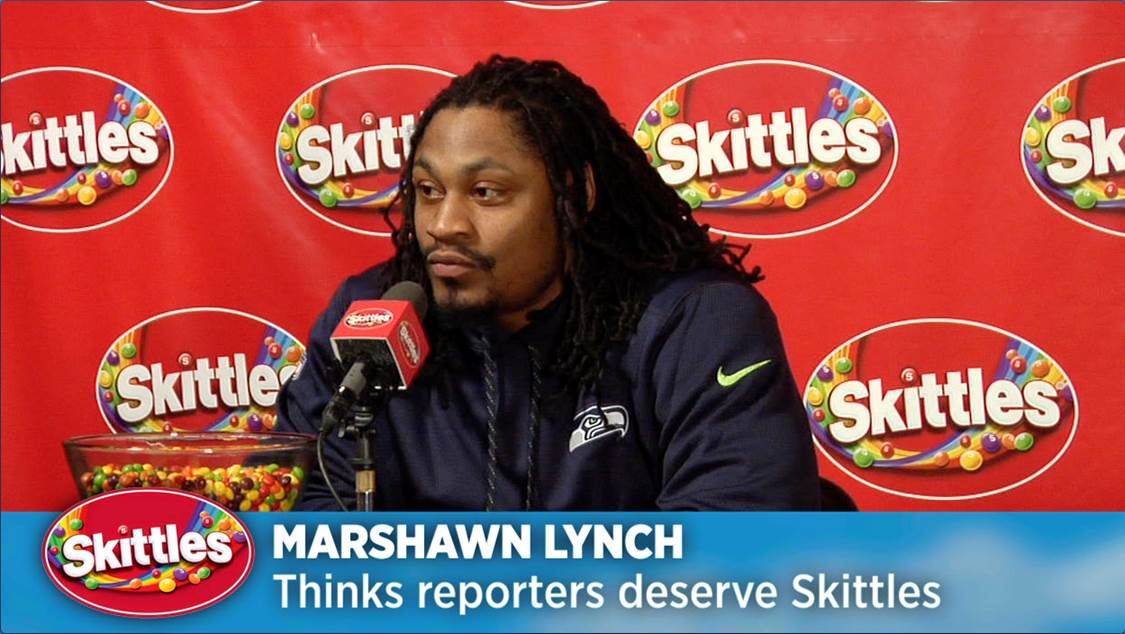