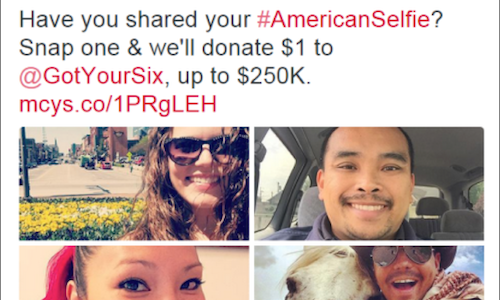 As one of America's oldest and most iconic retailers, Macy's supports the spirit of America with their annual July 4th fireworks show held in New York City.

For the last two years, Macy's "American Icons" campaign celebrated the people, places and things we love about America, starting Memorial Day and culminating on Independence Day. During this heightened time of patriotism, Macy's provided a platform for giving back to veterans through the Got Your 6 organization. Got Your 6 believes that veterans are leaders, team builders and problem solvers who have the unique potential to strengthen communities across the country and works to empower veterans to lead in their communities.

To reenergize the campaign and increase both awareness of the Got Your 6 partnership and customer participation, we made shoppers feel more personally involved with the campaign through a social activation. To increase awareness of the organization and donations overall, Macy's encouraged UGC participation as a way to fundraise for the organization.

In sum, the objective of the campaign was to drive awareness of Macy's partnership with Got Your 6 and to inspire consumers to engage with the American Icons marketing platform by submitting user generated content, with Macy's donating $1 to the organization for each submission.

Proprietary research revealed that Macy's shoppers are interested in giving back to the community, and Macy's sought to make it as easy as possible for consumers to make a difference. In fact, Macy's shoppers are 16% more likely to support a brand based on its charitable efforts. To make giving back easier, we turned to the "selfie." Given that Americans have embraced the "selfie" as a form of communication—one million selfies are taken daily—we built a social user-generated campaign that helped Macy's give back to Veterans at scale: audiences were instructed to utilize the hashtag #AmericanSelfie with their selfie and describe what they loved about America for Macy's to donate $1 on their behalf to Got Your 6. We tapped into social media platforms – Twitter, Facebook, Instagram and Snapchat – to seed out how-to content and house the submissions. Our media strategy was rooted in driving buzz with first-to-market social media opportunities and extending reach to new audiences through compelling influencer content.

Alongside paid social media placements, a network of influencers aided in publicizing the message and encouraged their base to rally around the cause. Twenty Millennial influencers were selected based on their audience size, platform specialization and/or niche category of audience (beauty, fashion, veteran, etc.). They created over 50 pieces of content that spoke in their voice/style while activating and encouraging their fanbases to follow suit. Enlisting popular influencers to share their #AmericanSelfie and a glimpse into what they love about America offered a personal and relevant experience to an audience outside of the Macy's core. The call-to-action to submit selfies was promoted with content across Facebook, Twitter, Instagram and Snapchat; user-generated content was aggregated through visual commerce platform Olapic for redistribution across Macy's social channels.

The content generated from these efforts was showcased across platforms in innovative formats to incite further participation and donation for Got Your 6. First-to-market activations included an Instagram Carousel with click-out button, which synergized the American Icons branded content alongside user-generated content. Snapchat was also utilized to reach the younger Millennial through the use of Discover edition takeovers, where #AmericanSelfie content was inserted in flow of the Daily Mail channel for six editions throughout the campaign execution.

Tapping into Macy's celebrity relationships (such as Britney Spears, Heidi Klum, Ryan Seacrest) and integrating #AmericanSelfie content with fashion bloggers expanded reach. As a final celebration, we integrated #AmericanSelfie into The Today Show's Orange Room leading up to the Macy's fireworks telecast on NBC, where they showcased the #AmericanSelfie campaign during segments and encouraged their viewership to participate.

The #AmericanSelfie activation exceeded all expectations. On Facebook the campaign garnered 33MM impressions, and on Twitter, #AmericanSelfie amassed more than 60MM impressions with engagement rates surpassing 6%. A brand lift study conducted on Instagram during the campaign saw a 13 point lift in awareness derived from the Carousel. Of all touchpoints, users engaged the most with influencer content, which delivered an average engagement rate above 17%, 4.8x beyond our benchmark.

The most significant day of the campaign was on June 14th, when Macy's promised to triple donations for each piece of content that was submitted by users. Considerable spikes were seen in submissions and engagement rate, with nearly 3,000 mentions on Twitter nearly 600 on Instagram (a 200% increase compared to the day prior on both platforms).

By activating off the innate human characteristic of wanting to help others as the foundation of this campaign, utilizing a turnkey method that allowed participants to donate proved highly successful. Additionally, seeking out a consumer on their preferred social platform, whether that be on Facebook, Twitter, Instagram or Snapchat, allowed #AmericanSelfie to reach a very qualified and engaged audience outside of the Macy's core. Enlisting the help of influencers proved beneficial in terms of not only content creation and new audience, but as a brand awareness and possible customer acquisition tactic as well. By the campaign end, 36,000 mentions were generated across Twitter, Instagram and Tumblr, and Macy's donated $250,000 to Got Your 6. 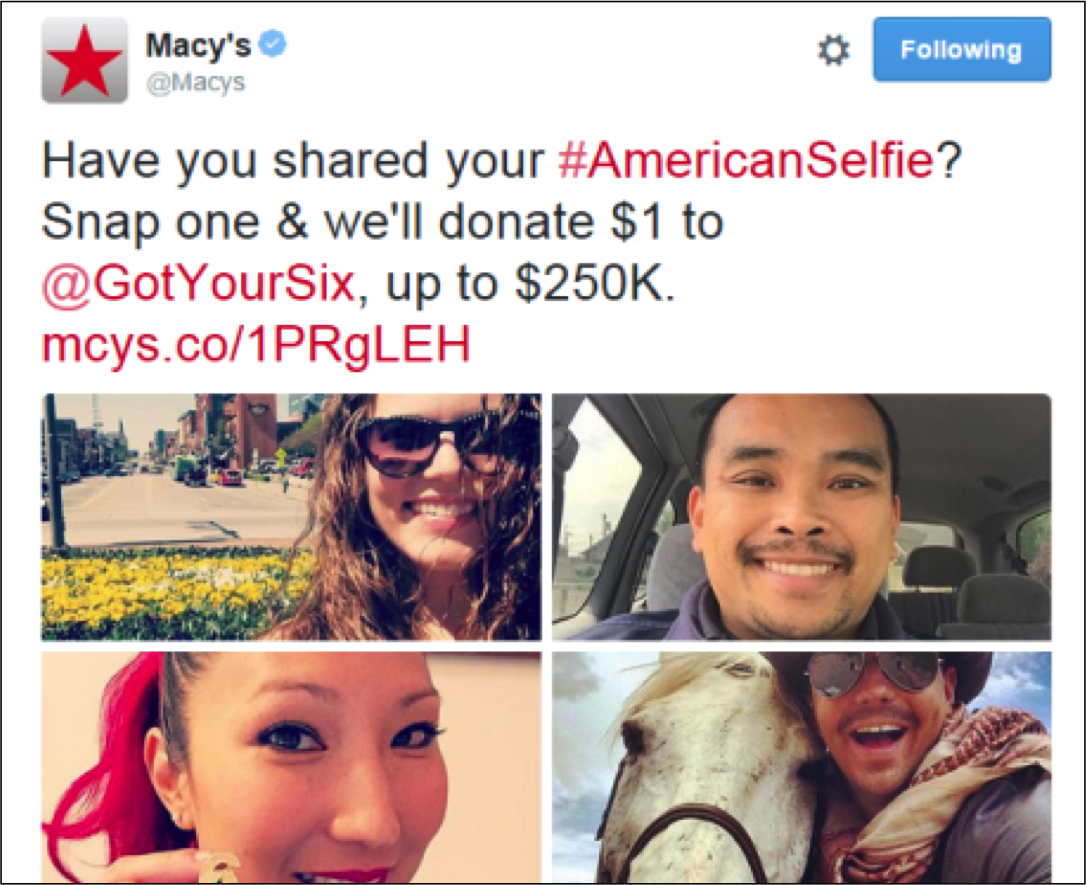