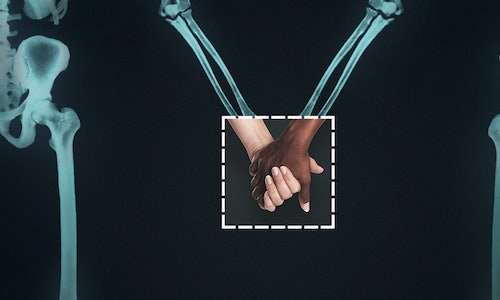 The Ad Council launched the Love Has No Labels campaign with a simple message – rethink the biases you didn't even know you had. Ultimately, we sought to promote acceptance and appreciation of all communities regardless of race, religion, gender, sexuality, age and ability by raising awareness for implicit biases. Since we were launching a brand new campaign, our main goal was to create awareness about the issue and the campaign. We drove video viewers to the campaign website, which features a quiz where you can examine your own biases and find resources on how to get involved.

We partnered with Upworthy for an exclusive debut of the initial campaign video on their Facebook channel to reach an audience who was inclined to like and share the video to help spread our campaign messages. The emotional video showed dancing skeletons behind a custom-built, simulated x-ray screen before revealing people from different backgrounds embracing to show that before anything else we are all human .

In addition to the online video, the integrated campaign included a website built on Tumblr featuring a quiz where visitors can examine their own biases and new social communities on Facebook and Twitter where audiences could find additional content on how to overcome those biases.

To extend the campaign, we tapped into celebrities and social media influencers to help spread our messages. Additionally, campaign outreach incorporated activations around key times of year, including Mother's Day, Hispanic Heritage Month, Pride Month and Fourth of July. We activated the campaign at NYC Pride 2015, marching in the parade and setting up gif and video booths for people to share their #lovehasnolabels stories.

The success of this campaign was measured by social media engagement, visits to the website, quiz completion rates, online video views and earned media support, as well as overall awareness of the campaign.

Since the initial video debuted exclusively on Upworthy's Facebook page, it has been viewed over 160 million times making it the 2nd most viewed video of 2015. Additionally, it was the 2nd most viral video on Facebook, the 4th most viewed on YouTube and one of the best performing Upworthy videos of all time. It is the second most viewed social activism video ever behind Kony 2012.

To date, there were more than 2.7 million visits to www.lovehasnolabels.com. The campaign also encourages audiences to use Faces of Love, a social tool on the campaign website, to upload a picture showing how their love has no labels. More than 1,000 personal stories have been shared in the social gallery of the website and the hashtag has been used over 30,000 times generating over 110 million potential impressions.

Video for "Love Has No Labels" Diversity & Inclusion Campaign