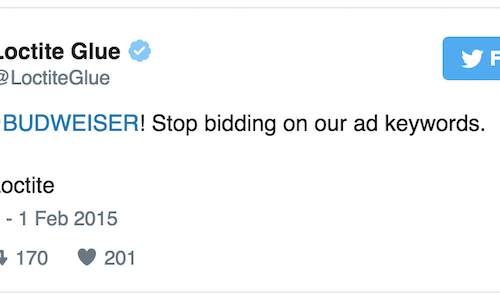 When Loctite's :30 spot went out to the TVs of millions of Americans that night, the social media glue team was ready to make every next moment people had with the brand feel as weird and special as the spot itself. While the deluge of tweets were rolling in about the spot, Loctite realized that its fellow Super Bowl advertiser, Budweiser, was bidding against its Twitter keywords. Loctite needed the most out of this one night, so they decided in real-time to ask Budweiser very nicely to stop doing what they were doing. In a tweet. In front of its lagre, newly-acquired audience.

This unplanned David vs. Goliath callout about the back-end of social advertising moved Loctite into the spotlight once again that night.


The original Loctite tweet to Budweiser received 1,795 total engagements and 37,383 total impressions. The tweet was covered in Adweek and other publications. It never received a response from Budweiser; however, many people on Twitter said "shots fired!" and @dylanparks said, "BEST brand tweet from #SB49," which Loctite very much appreciates.