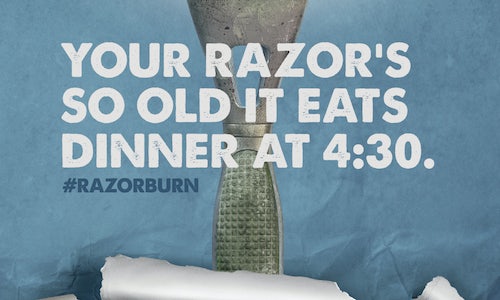 The mega razor corporation says that their blades are such high quality that you can use them for a month. But guys know that's not true. They can see it on the razors and feel it when they shave. Dollar Shave Club reframed this frustration to a relatable truth: The mega razor corporation's blades are SO expensive, you HAVE to use them for a month — and that's disgusting.

Through a series of TV commercial, web videos and social posts, crusty old razors humorously harass their owners and remind them that they're stuck shaving together because changing blades is too pricey. These characters creeped onto all aspects of the campaign, from environmental billboards to user-generated memes. Dollar Shave Club brought the crusty old razors to life (literally) to meet these goals:

We've all been there — You're in a rush to get out the door and you have to shave. You begrudgingly grab your disgusting month-old razor, take a deep breath and suck up the courage to drag the nasty blades across your skin. Whether you forgot to buy razors or didn't want to fork over the $20 for a pack of blades, this is a frustration consumers face on a daily basis and Dollar Shave Club is fixing that.

By creating exaggerated and relatable situations, Dollar Shave Club used this consumer pain point to educate purchasers about the quality of DSC's service and to change consumer behavior of how individuals buy razors and shave. Each implementation of the campaign had a unique strategy and focus.

#RazorBurn: To help tell the story, the brand used the hashtag #RazorBurn and encouraged conversation around consumers' personal resentment. A #RazorBurn is a funny insult about gross, old, dirty and expensive razors. By creating a simple, replicable format, Dollar Shave Club's social followers and fans were able to easily write and share their own #RazorBurns through a meme generator the company created.

Social: Dollar Shave Club utilized Twitter, Facebook and Instagram to share the initial commercials and then expanded the campaign and character development through web extension videos and #RazorBurns. DSC also used #RazorBurns to respond to real-time events. For example, on the morning of New England Quarterback Tom Brady's appeal decision, DSC posted a #RazorBurn saying "Your old razor's so scummy it deflates footballs." The conversation surrounding the spotlighted frustration increased Dollar Shave Club social mentions by 24%. To encourage further sharing, the company re-tweeted and re-grammed the funniest ones, even going as far as creating a billboard from a funny #RazorBurn tweeted by one of their fans — integrating the campaign.

Creator Campaign: For further impact and reach, Dollar Shave Club partnered with social creators to illustrate the idea that milking your blade is disgusting and unnecessary by using images and captions that would resonate with their audience. Rather than sending company-created images, DSC ensured the creator would maintain authenticity by allowing he or she the freedom to do what they do best — create. This portion of the campaign resulted in over 5.7 million additional impressions on Instagram alone.

Out of Home: Contextual #RazorBurns appeared on billboards and out of home advertisements. For example, on the back of a bus a billboard said "Your razor's so old its blinker has been on for 45 minutes" and bathroom stalls in bars said "Your old razor's so scummy it swipes right on everything." Consumers shared the contextual billboards on their social channels, always noting the relevance of the topic.

Dollar Shave Club launched this campaign on August 31 with new television commercials -- "Razor Escapes" and "Jacques." On social media, DSC saw a 24% lift in mentions after the campaign launched. Dollar Shave Club increased the brand's overall followers by 6%, adding more than 320,000 followers to all of its social channels. By strategically utilizing Twitter for #RazorBurn, followers engaged with tweets 31% more compared to the previous quarter before the campaign launched, proving that the idea resonated with DSC's audience.

After only its first month on the airwaves, "Razor Escapes" has already shown an increase in men's consideration to join Dollar Shave Club, compared to our previous successful campaign. There was a 10% increase in organic search traffic compared to the three months before the campaign launched. 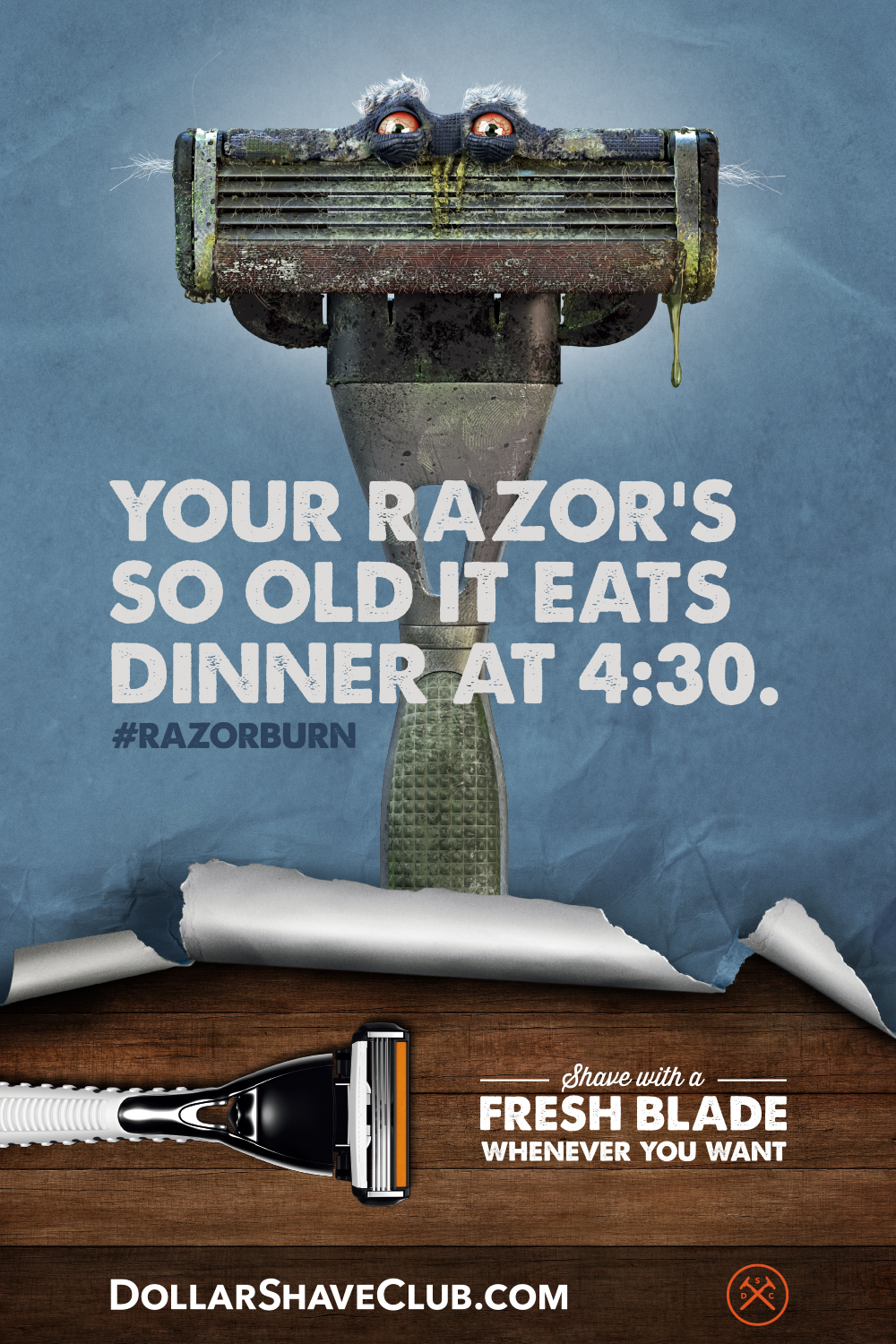 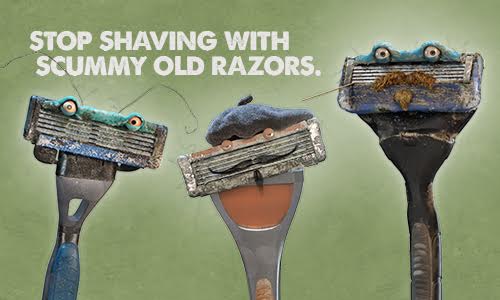 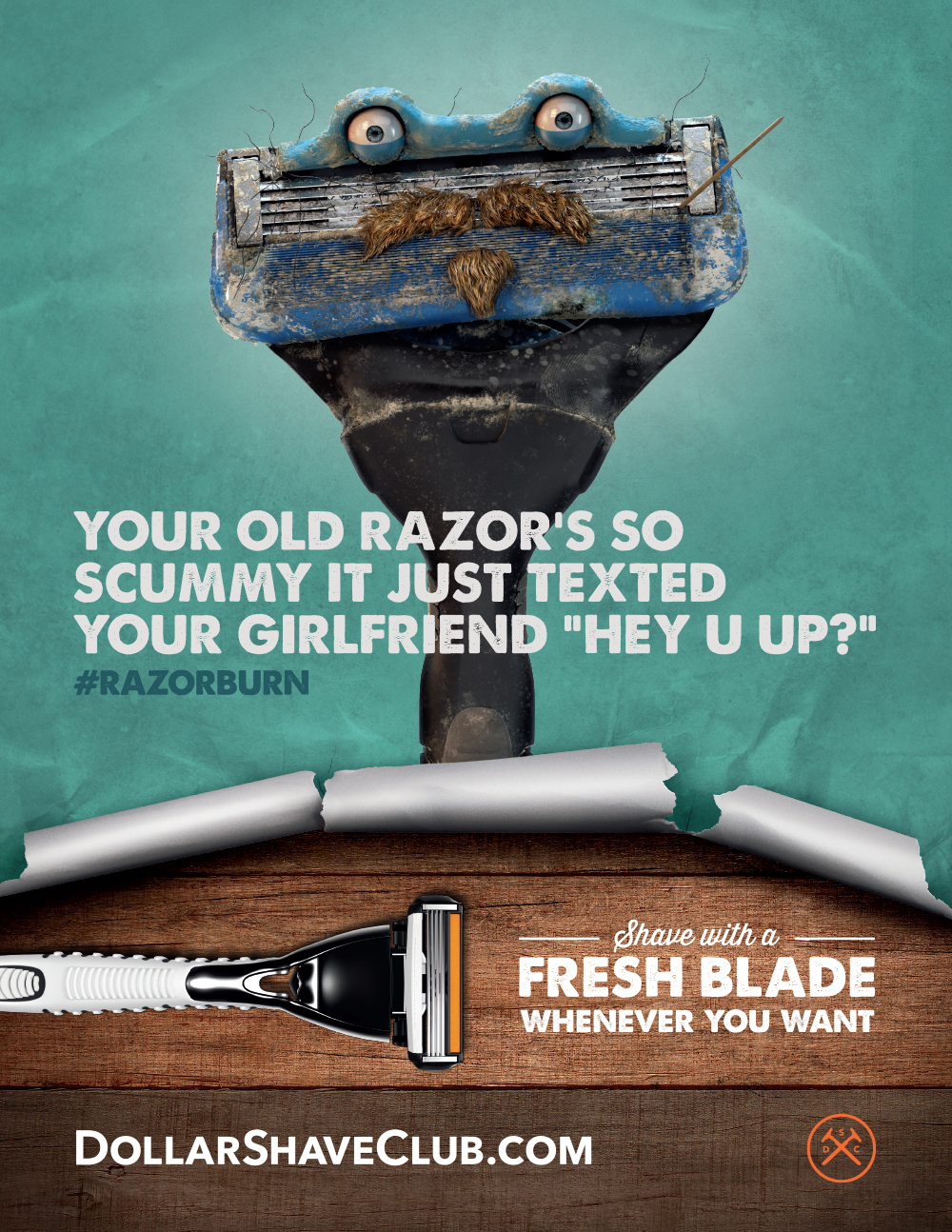 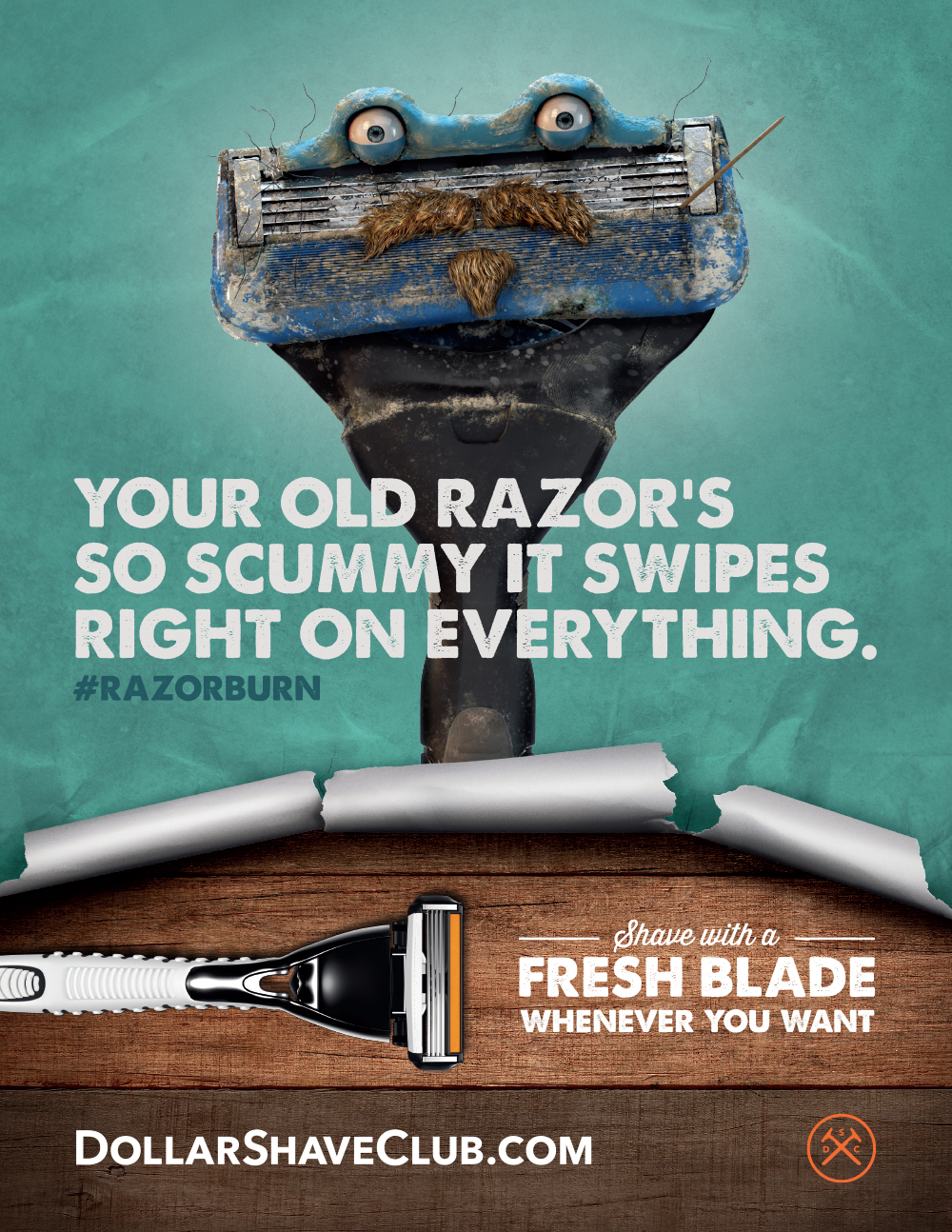 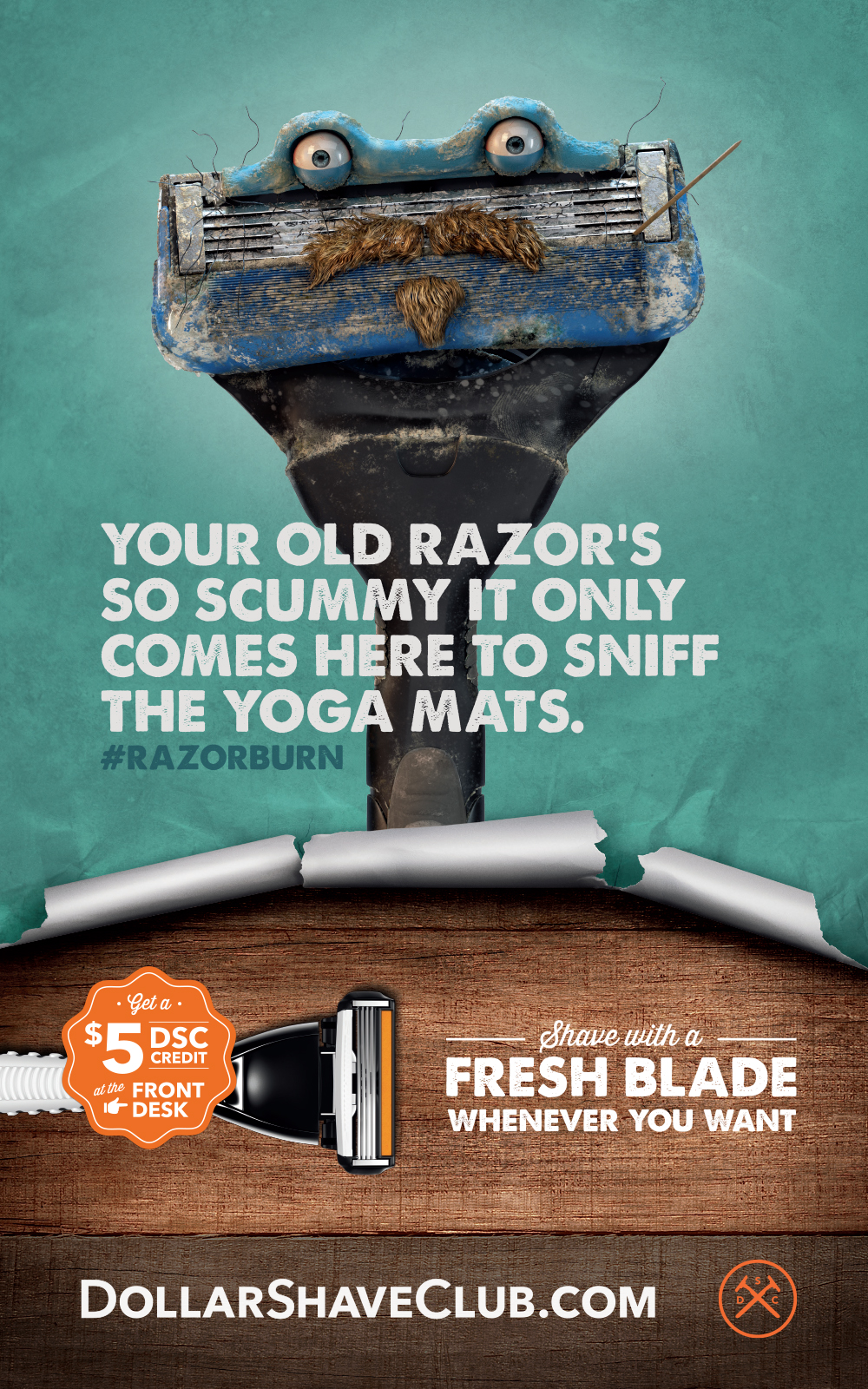 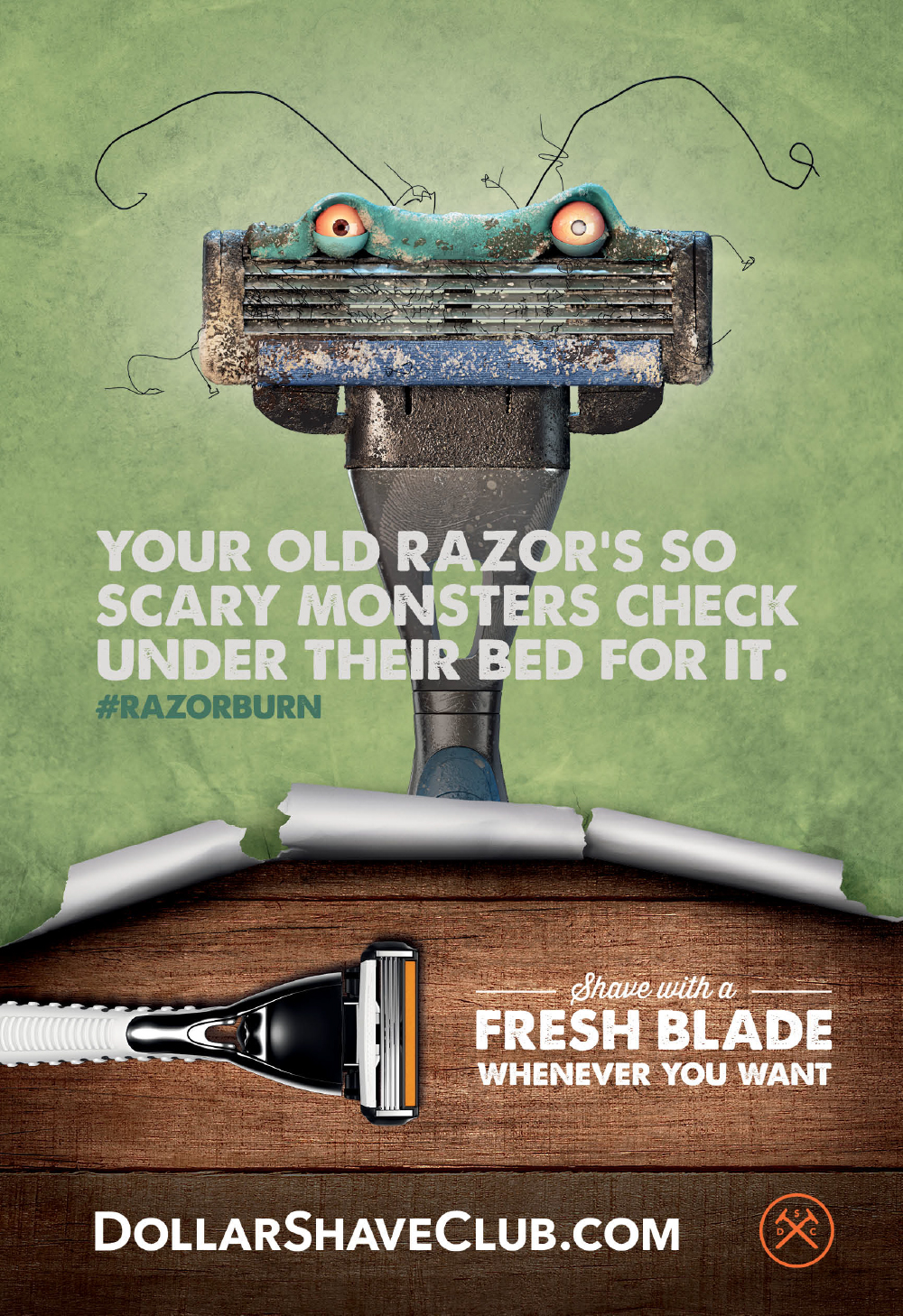 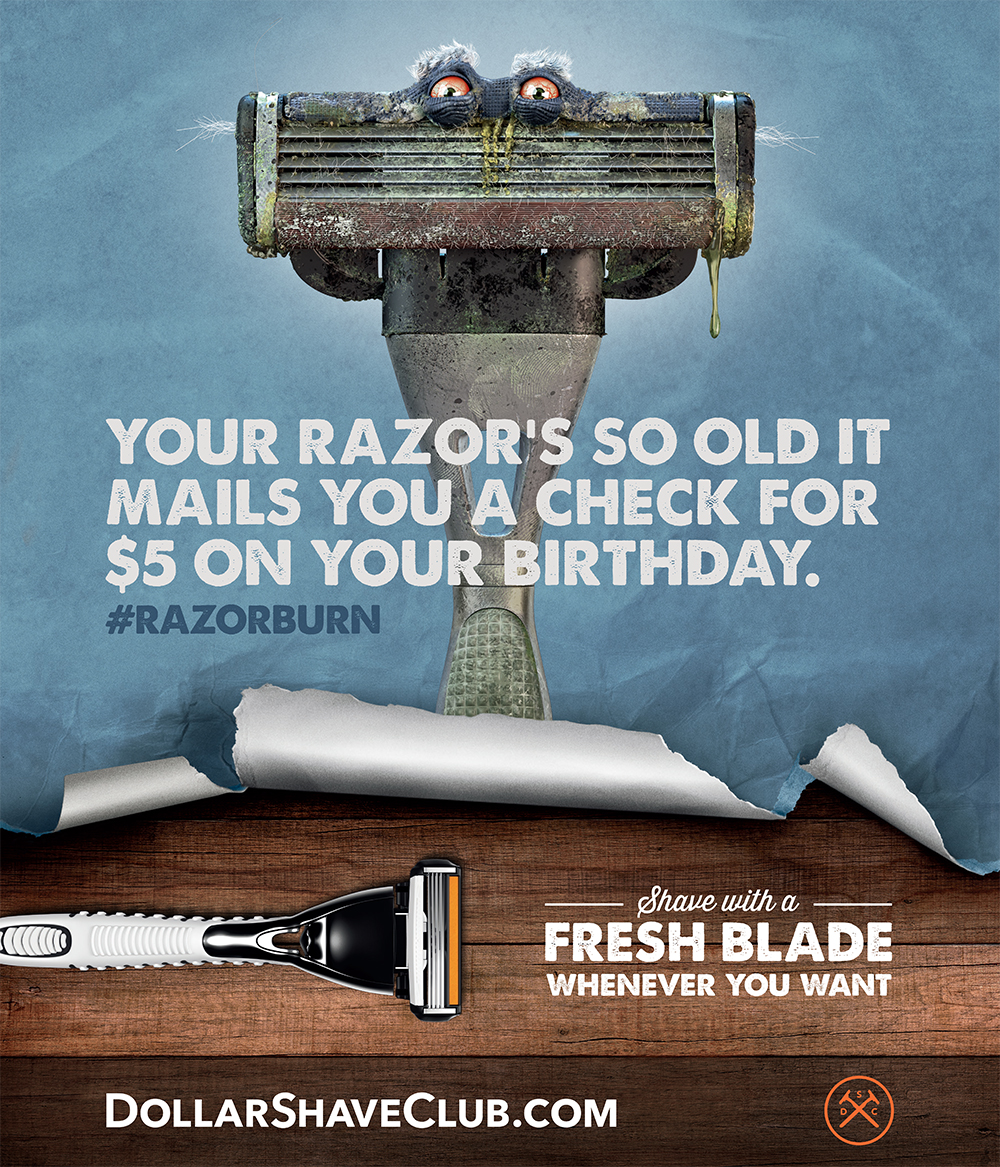