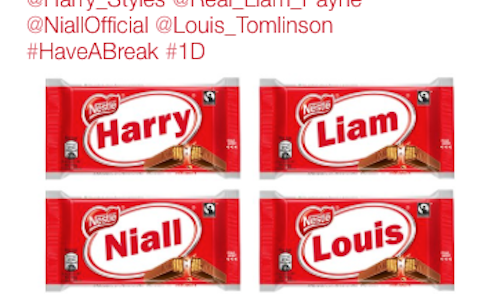 It was announced that boyband One Direction would be taking a break. KITKAT recognises the importance of 'the break' which is often enjoyed for a finite amount of time. KITKAT's long standing message of 'Have a break, have a KITKAT' creates the potential for an association between the brand and this break for the boyband. We wanted to reinforce the idea for fans of both One Direction and KITKAT that a break is temporary and give them a personal type of KITKAT break that celebrates this.

Timing
Most days on Twitter a hashtag or subject related to One Direction trends worldwide, giving the 1D community something to focus on and talk about. We knew the boys were going on a break but we needed to find the right time to post. On a day where something 1D is trending or popular, our post would be lost in the feed of 1D conversation. Fortunately, due to the release of the new Star Wars film and initial noise dying down around the hiatus of the band, the majority of social conversation on Twitter was focused elsewhere. The 1D fans were desperate for something new to engage with and by choosing to wait and post during this very specific time, we were able to very quickly become something the fans could talk about! We cut through all the noise around Star Wars and lack of 1D news to deliver a perfect talking point for the 1D community on a day they had nothing to go on!

Gain Support
The post would not have been as successful without major influencers retweeting the post. One of the members of 1D, Liam Payne, made the decision of retweeting the post, partly due to visibility and fan noise but also due to a pre-existing love for KITKAT which we had known about! Other major official and unofficial fan club accounts also helped pick up and retweet out the post in a very short matter of time, helping to create the viral effect we desired. Various websites and media coverage also helped to direct fans to the post.

Tone
The tone of the copy had to work well for both KITKAT and 1D. The copy 'See you soon!' helps create understanding that a break is temporary and not forever. Fans of the band believe the boys will make a return and would like to see this sooner rather than later, therefore the sentiment works for them as well as staying true to KITKAT leveraging the use of 'the break'. We needed to get this right to achieve the correct sentiment.

Personalisation
KITKAT has recently changed its on-pack design globally from 'KITKAT' to different types of breaks being printed on the packaging. By directing the tweet to the boys individually and putting their names on a KITKAT, we are reinforcing the idea that this is a personal type of break for the fans. They are taking a 'Harry break' as much as they might take a 'YouTube break' for example. Again, this works for both the KITKAT brand as well as the fans.

No paid media support was used to support the post and it achieved the following results:

These stats make it the most retweeted tweet ever for KITKAT.

The tweet created great excitement among fans of the group and drove nearly 6,000 followers to the KITKAT page from a single tweet. The tweet was recognised by Adweek as 'The Perfect Tweet In Response To One Direction Taking a Break'.

The general fan response was incredibly positive with the majority of fans wishing for the bars to be put into production. 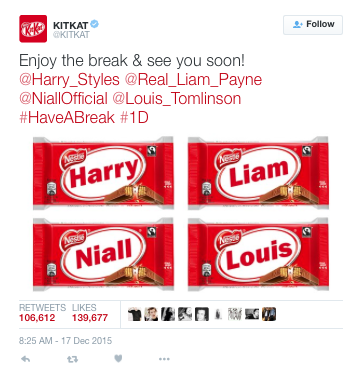