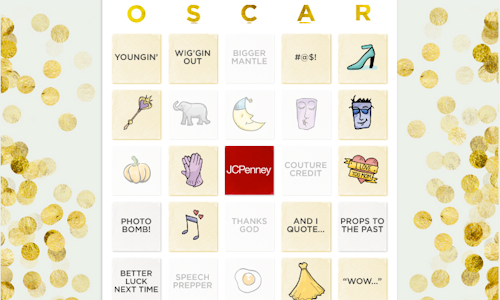 Oscars® Play to Give presented by JCPenney

In 2014, JCPenney relaunched its brand with a commitment to "fit" the diversity of America's sizes, shapes, budgets, styles, and occasions. Although JCPenney successfully regained many of its core consumers after a failed rebranding effort, focus studies showed that JCPenney was still not perceived as being stylistically on-trend or culturally relevant. With the upcoming spring fashion season, JCPenney sought to differentiate itself and elevate its style credentials.

For over a decade, the Academy Awards® has presented an opportunity for JCPenney as its platform to introduce its spring fashion and showcase its "fit" promise, highlighting its affordable styles for spring. It is a "tent pole" event due to its massive reach (43.7MM viewers in 2014) and fashion contextual relevancy – a key moment for JCPenney to showcase its brand and set the tone for the year.

We wanted to develop an Oscars® campaign that would be disruptive and engaging, leveraging the Oscars® platform to deliver the brand strategy for 2015 through a fully integrated 360-degree campaign. In addition, the campaign needed to create social buzz around topical and relevant conversation for the brand, and showcase JCPenney's style credentials to a broader demographic.

The big idea? Leverage multiple screens in a mobile and desktop gaming experience to drive disruptive real-time interactions that marry JCPenney's style credentials and generosity, appealing to both millennials and families.

In JCPenney's 14th consecutive year as retail sponsor of the Academy Awards®, the brand created their first-ever second-screen interactive gaming experience in partnership with ABC and the Oscars®. The responsive-designed site accompanied the live broadcast of the awards show and encouraged viewers to play along as culturally relevant tiles activated along with the live broadcast programming.

Tiles were designed to reflect a style and culturally conscious brand by featuring topical events and fashion (ex: "celebrity group selfie" or "shocking slit gown"). Exclusive sketches of JCPenney designs were featured in loading images of the site, and original designs were featured on the tiles themselves. Tiles were highlighted the moment events took place during the awards show, giving JCPenney a right to lead the night's conversation.

Every tile claimed supported one of three children's charities a player selected upon signup, Boys and Girls Clubs of America, DoSomething.org, and No Kid Hungry, ultimately leading to a $50,000 giveaway to the national organization Share Our Strength to support its "No Kid Hungry" campaign. A grand total of $100,000 was donated among the charities.

A 30-person "war room" anticipated, tracked, and coordinated events in real time. "Play to Give" was supported from digital, traditional, out-of-home, email, app, SMS, dot com, and most importantly via social and influencers including Meghan Trainor, Arielle Nachmani, Mario Lopez, and Nina Garcia.

Understanding that the Academy Awards® is a growing second-screen experience opportunity with more and more viewers every year tweeting and talking about the show on social media, JCPenney prioritized its social channels to maximize engagement and reach. By integrating key events of the night, the brand was able to converse in real time with its audience through social channels. Integration of Facebook and Twitter socially gamified the experience by letting users form teams as well as extended reach through sharing. A responsive, digital experience was key to allowing participants to play on multiple mobile devices in conjunction with the live broadcast.

JCPenney saw a 244.7% lift in digital engagement ratings from social media posts promoting its "Play to Give" game and their spring fashion commercial (Digital Engagement index). They became a lead innovator in Oscars® marketing by integrating fashion and leveraging organic disruptions. The retailer was noted in the top five advertisers for social buzz, with over 2,000 Academy Awards-related tweet mentions – a 78% increase on the day of the Academy Awards (StatSocial). JCPenney's Play to Give game was also mentioned in Academy Award marketing stories in major publications such as Advertisting Age, Wall Street Journal, Forbes, Yahoo and Bloomberg.

Video for Oscars® Play to Give presented by JCPenney 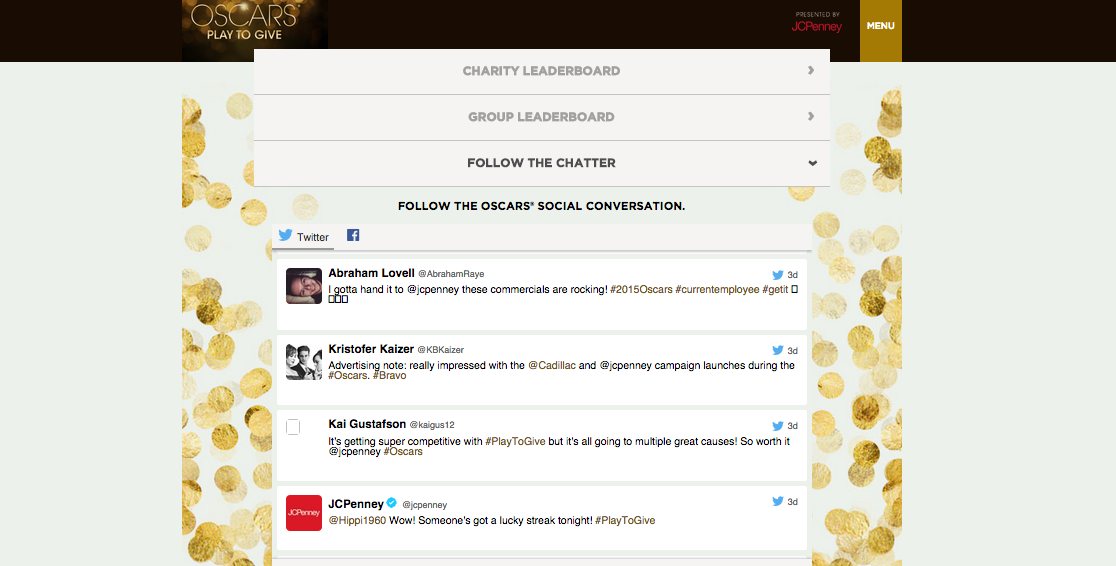 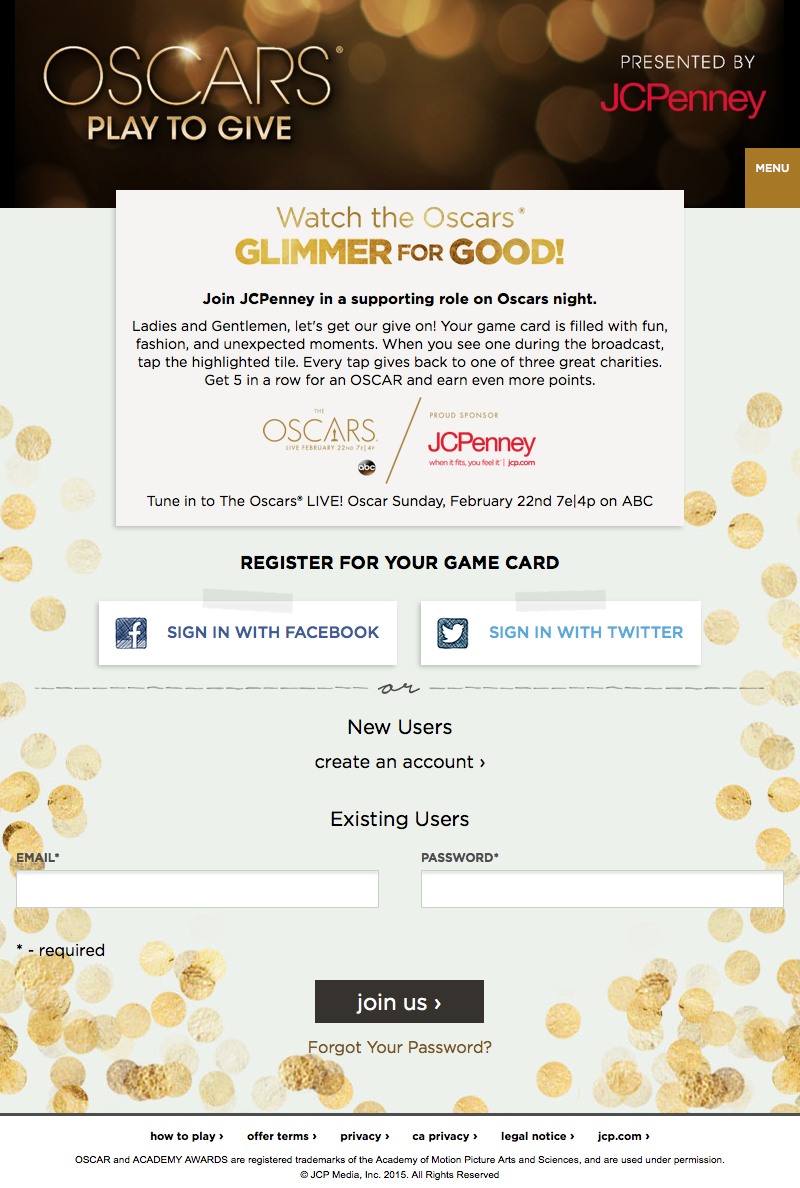 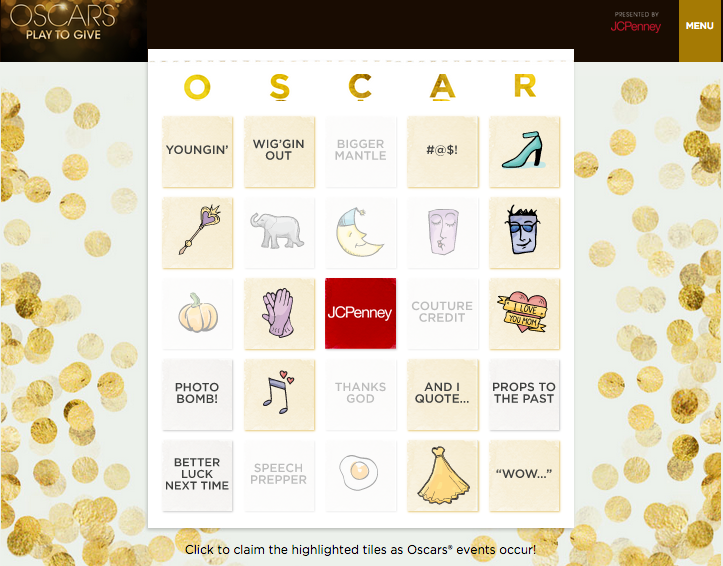 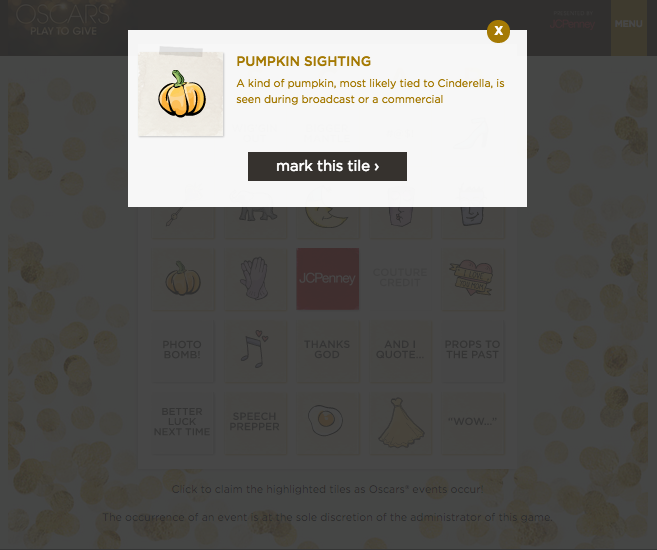 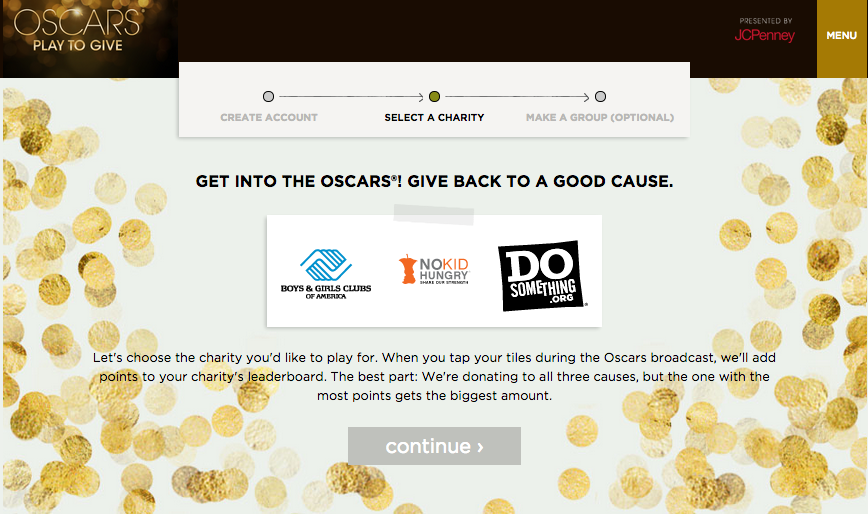