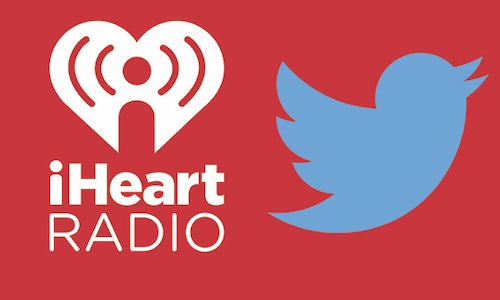 iHeartRadio is a service for music lovers run by music lovers. We connect fans with their favorite artists like no other music platform or company. Music fans are the lifeblood of iHeartRadio – iHeartRadio's Twitter presents followers with entertaining content, robust live event coverage and engaging campaigns that give them the opportunity to interact and join the conversation with their favorite artists, go behind-the-scenes at events and radio stations and share listening experiences daily.

iHeartRadio's Twitter account is the leading social platform for live music event coverage. This includes live tweeting iHeartRadio's tentpole events: iHeartRadio Music Awards, iHeartRadio Music Festival, iHeartCountry Festival, iHeartRadio Summer Pool Party, iHeartRadio Fiesta Latina, and the multi-city iHeartRadio Jingle Ball Tour. At each event, fans use an official hashtag to have their tweets posted on screens in-venue for a shared social experience. For those not able to attend one of iHeartRadio's marquee events, iHeartRadio keeps the conversation going with live content and breaking news updates with a small army of social media enthusiasts and influencers. iHeartRadio also live tweets music events throughout the year, and uses strong relationship with the music community to have artists take over the Twitter account from those events. iHeartRadio utilizes teams from its 858 radio stations to live tweet from music festivals across the country such as ACL, Lollapalooza, etc. In addition, Twitter allows fans to enter iHeartRadio's star-studded national contests, bringing music fans once in a lifetime experiences with their favorite artists.

In 2015 iHeartRadio created a weekly feature called "iHeartRadio Twitter Tuesday," which has become a weekly music event for fans digitally across the world. Every Tuesday, iHeartRadio hands over their Twitter account to some of the world's biggest artists for a unique Q+A experience. The roster of talent has included artists such as Mariah Carey, Jennifer Lopez, Shawn Mendes, Demi Lovato, 5 Seconds of Summer, Tori Kelly, Ed Sheeran, Pitbull, Pete Wentz, Alessia Cara and more. The feature gives artists a direct connection to an engaged audience, allowing them to share personal stories, triumphs and even breaking news. Notably, during one Twitter Tuesday takeover, Pharrell exclusively broke the news that he was working on a new N.E.R.D album, which garnered significant press coverage. On another Twitter Tuesday, Nick Carter revealed that his new album would include a collaboration with Avril Lavigne, which was also picked up.

Another impactful iHeartRadio Twitter campaign is "My Photo With," which gives fans the opportunity to have their photo taken with their favorite artists simply by submitting a picture to iHeartRadio on Twitter with a hashtag. When that artist stopped by iHeartRadio, they took pictures with the fan photos, which were then shared across Twitter.

iHeartRadio also utilizes Twitter to exclusively release new music and videos from artists like Tori Kelly and Adam Lambert by asking fans to "flock to unlock." Once a tweet hit a pre-determined number of retweets, the content was made available to fans. During the flock to unlock campaign, #iHeartAdamLambert trended in the United States.

iHeartRadio's Twitter saw a 60% growth in followers YOY from 2014, increasing organically by more than 292,000. The Twitter Tuesday campaign alone generated over 950,000 mentions and 4.9 Billion impressions throughout the year, while the Valentine's Card campaign garnered national attention with mentions from "On Air With Ryan Seacrest" and "Elvis Duran and the Morning Show." Also with 1.2 MM link clicks this year, iHeartRadio saw a 139.8% increase in traffic from Twitter activity. All of iHeartRadio's major tentpole events trended on Twitter, with the iHeartRadio Music Festival, iHeartRadio Music Awards and iHeartRadio Jingle Ball each trending worldwide. #iHeartAwards was recognized by Twitter as the 7th most popular music hashtag on the platform for all of 2015, beating both the EMAs and VMAs. 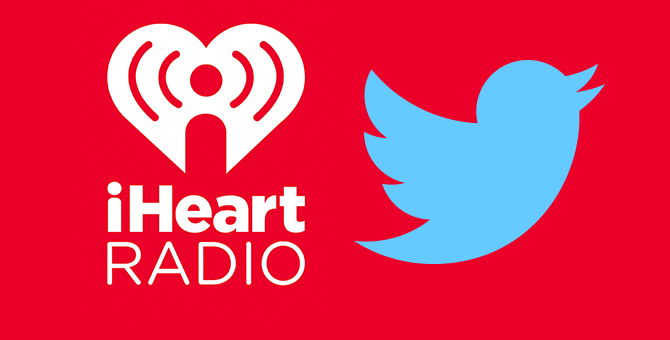 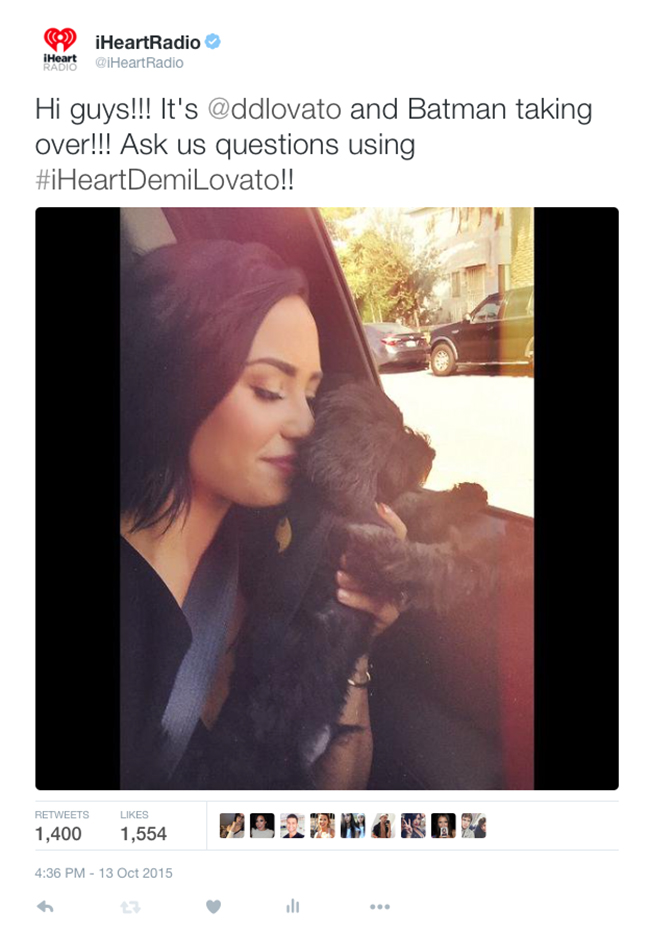 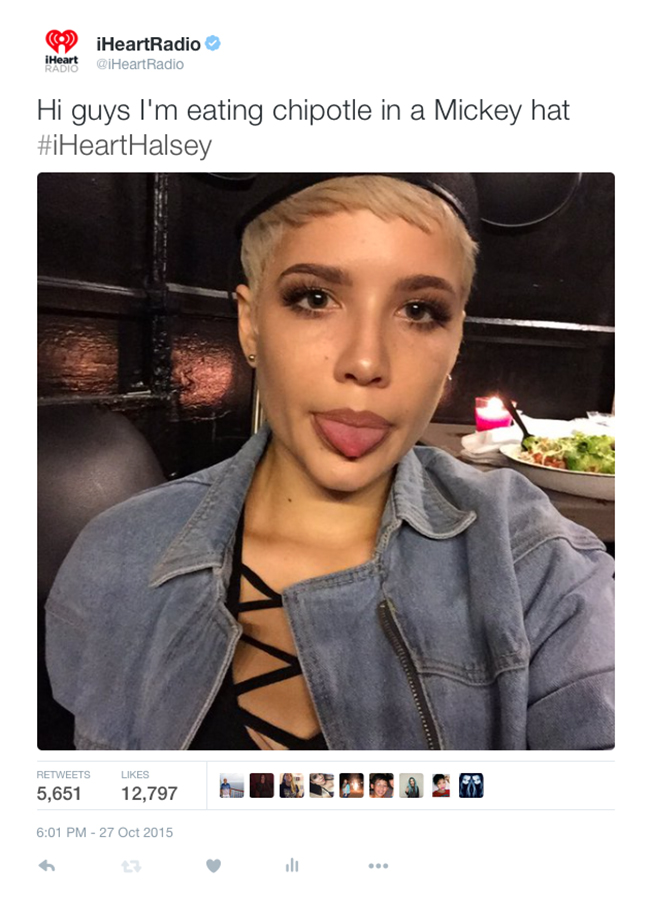 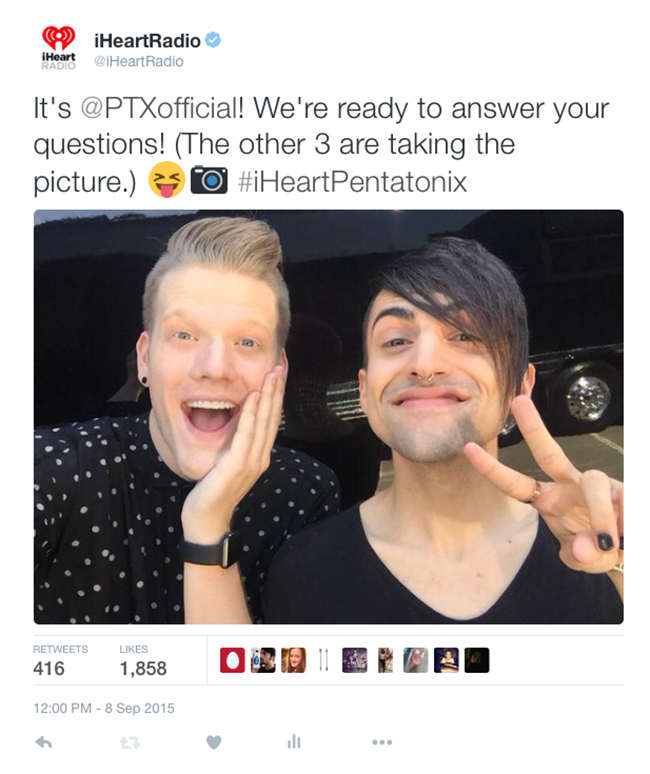 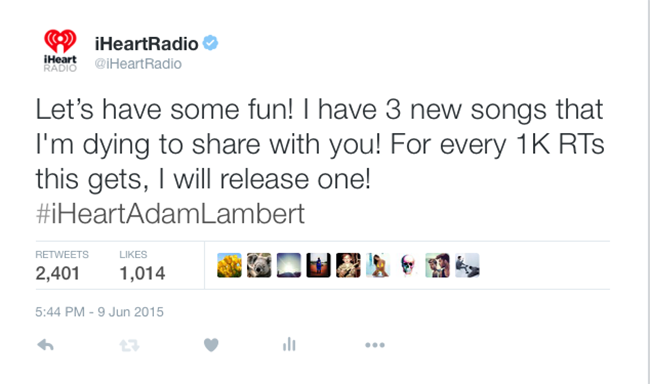 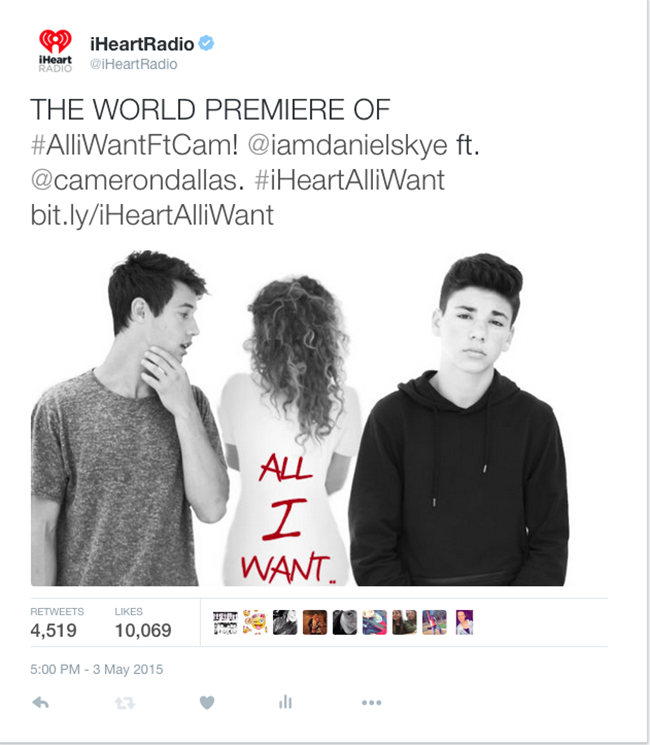 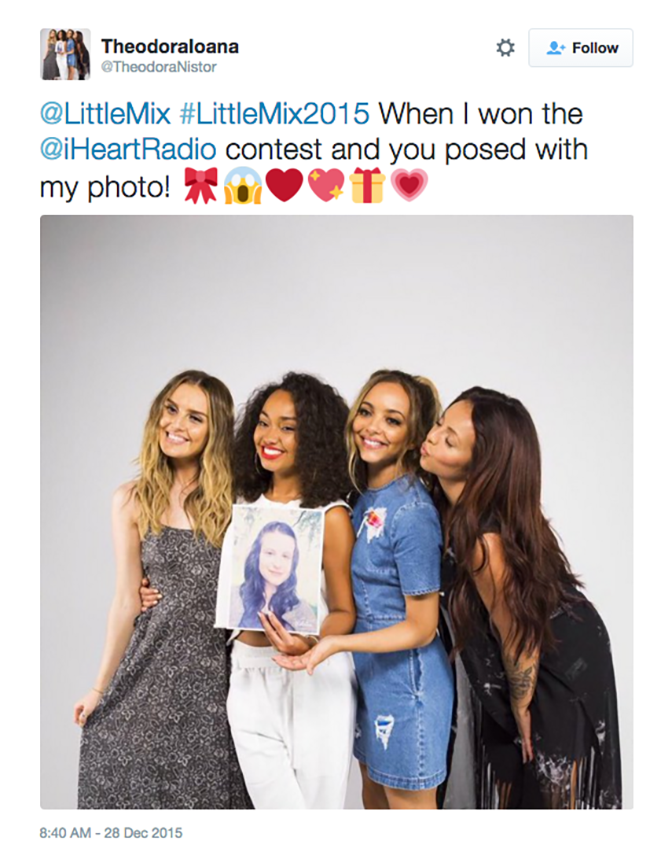 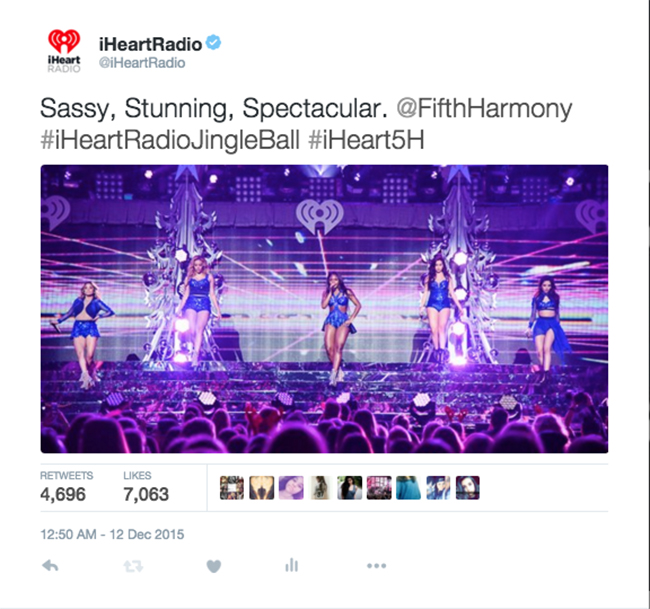