The Human Rights Campaign (HRC), the nation's largest LGBT civil rights organization, looked to elevate the conversation around marriage equality throughout 2015 using a broad-based digital marketing campaign about loving, committed same-sex couples and the Supreme Court's impending decision. HRC wanted to build a drumbeat across the country and win over hearts and minds around the globe, encouraging a conversation both on and off line, developing a personal connection and excitement for this milestone.

Ahead of the Supreme Court decision in June, HRC worked to make creative and original content that would allow people around the globe to celebrate love. To drive the marriage equality narrative, HRC chose to use the hashtag #LoveWins if the Supreme Court ruled in our favor.

As soon as we heard on June 26, HRC leaped into action, implementing #LoveWins across the board. HRC used every tool at our disposal -- even balloons -- to make our hashtag go viral.

HRC used social media to rally millions in support of the marriage equality decision, encouraging conversation and sharing several image shares and photos from the Supreme Court, emphasizing the message of love, support and victory. All content deployed throughout the day used #LoveWins and each rapid response post was released on a specific platform to gain momentum. For example, posts urged others to share photos with their loved ones on Facebook, retweeted influencers on Twitter, shared photos live from the Supreme Court and the White House on Instagram and even included a Snapchat takeover with openly gay YouTube stars. HRC posted over 30 photos on Instagram, 40 posts on Facebook and 40 Tweets. Our Snapchat interactions skyrocketed after YouTube stars Raymond Braun and Aaron and Austin Rhodes took over our account, resulting in a viral video of their reaction to the decision. Our content was innovative and interactive, highlighting not only the win for LGBT people, but celebrating love for everyone, everywhere.

In order to engage in discussions on marriage equality and stimulate participation from the public, HRC positioned ourselves at the Supreme Court and White House with balloons that spelled out "Love Wins", as well as signs with the hashtag #LoveWins on them. HRC also asked for user-generated content from people using the hashtag. By publishing the hashtag in several different spaces HRC positioned itself at the forefront of the LGBT equality movement.

In addition to posting HRC's own content, HRC tapped into our vast network of social media followers, as well as our high-profile members and supporters, to amplify our online outreach that spanned across several digital platforms. Throughout the day, HRC shared messages of love and celebration from people such as President Obama, Justin Timberlake and Ellen Page.

The #LoveWins hashtag was the dominate message around the Supreme Court's marriage equality decision in June. HRC received overwhelming support and engagement from countless individual citizens, prominent celebrities such as Taylor Swift, political leaders like President Barack Obama and Hillary Clinton and businesses such as Ben and Jerry's, who sent supportive messages about marriage equality with their millions of followers on social media. #LoveWins was a global trend throughout the day, trending on Facebook, Instagram and Twitter, gaining over 1.4 million photos on Instagram and 7 million Tweets.

#LoveWins was not only written, but also spoken on countless news outlets throughout the day as coverage of the decision played out. Everywhere people turned, whether it was the front page of a local paper, a national paper, the nightly news or their Twitter of Facebook feed, #LoveWins appeared.

#LoveWins defined not only the marriage equality victory, but the immense excitement and joyous emotions of a day and a decision that will go down in history. 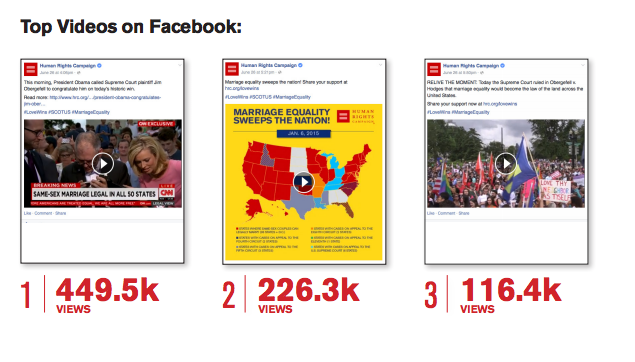 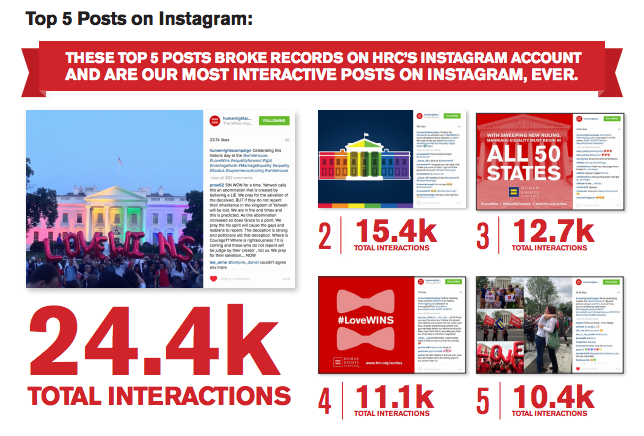 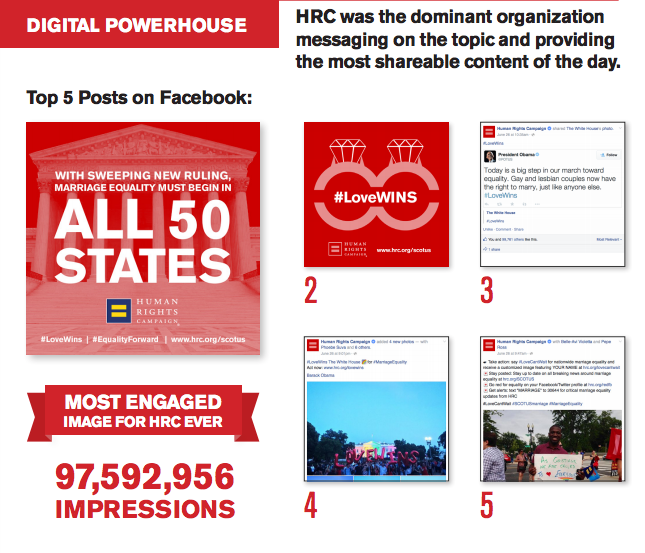 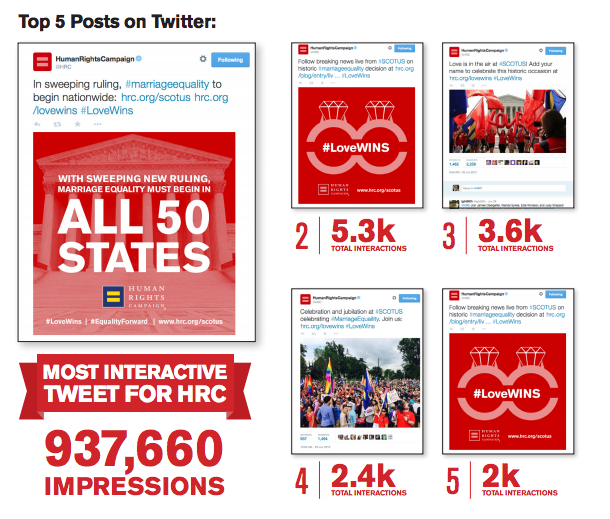 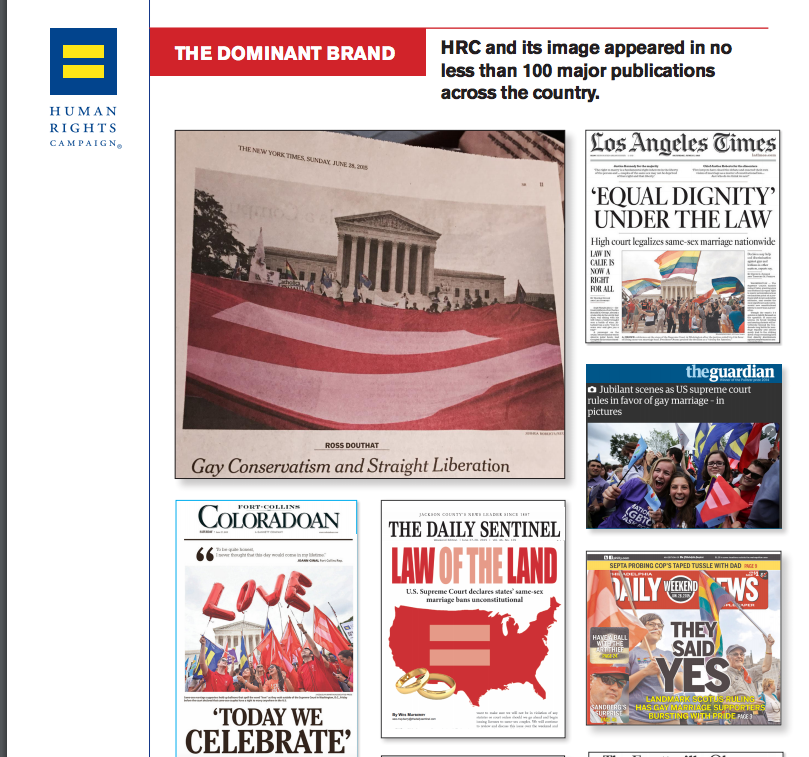 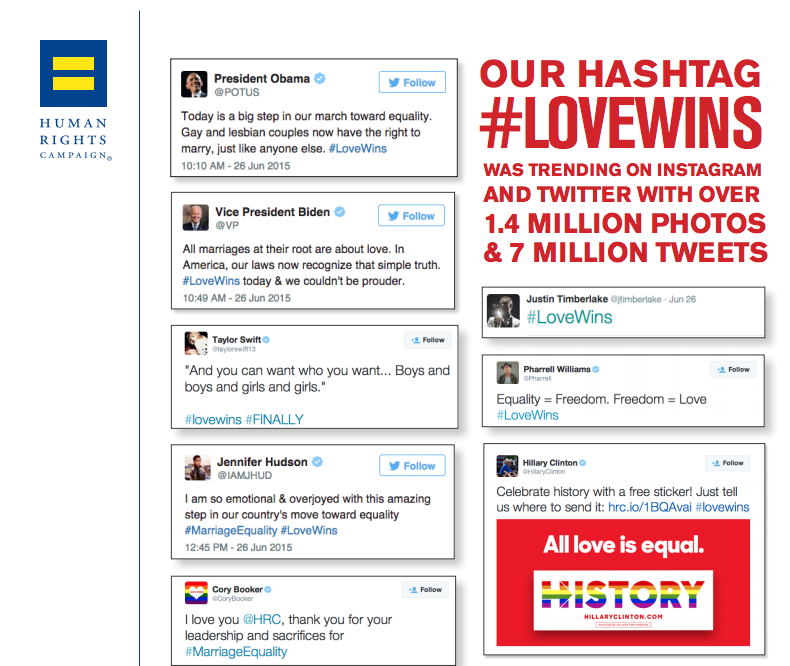