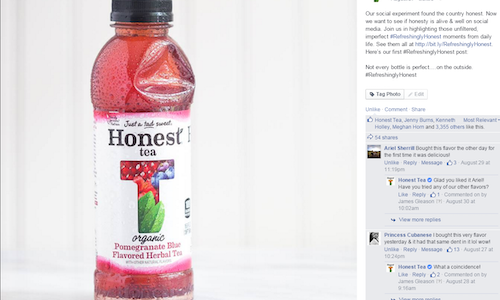 At Honest Tea we've always been curious to see if the rest of the country feels as strongly about honesty as we do, so we developed a social experiment to find out if people would pay for their beverages on the honor system if no one appeared to be watching. We set up pop-up stores across the USA. Each of the pop-up stores had signs that read, "Honor System: $1 for every beverage you take." Our staff then watched what happened to see the most (and least) honest city in America. Turns out 94% of Americans were honest.

It's clear that people around the country are honest when given a choice to pay or steal, but does it carry over to social media? We wanted to find out. So we encouraged people to highlight the unfiltered, imperfect "#RefreshinglyHonest" moments in their daily lives. Photos tagged with #RefreshinglyHonest on Instagram & Twitter were uploaded to our campaign site. Our goal was 125,000 actions around #RefreshinglyHonest posts.

We deployed a three prong strategy with the goal of 125,000 actions around #RefreshinglyHonest posts by activating:

1) The media: We released the results of our National Honesty Index on August 25, 2015 highlighting how honest we found Americans to be and what was the most honest (and least honest) city in the USA. We even went as far as to say which hair color was more honest. 170+ media outlets in 28 states and Washington, DC picked up the story resulting in 36.7MM impressions. As media talked about the National Honesty Index, the call-to-action was to post #RefreshinglyHonest content on social media.

2) Social media: As a brand, we decided to post over a dozen social media posts being honest about our products and highlighting the more mundane aspects of our business. These posts included a photo of a dented bottle, moms taking their kids' Honest Kids, etc. We then launched an ad campaign around these posts.

3) Influencers: In addition to our own brand ambassadors/bloggers/influencers, we worked with the agency, Influential.co to activate paid influencers to post #RefreshinglyHonest content on Instagram. We also partnered with a YouTube star to create a short video encouraging people to post #RefreshinglyHonest content. The result was 17.2MM people reached with 322,115 actions taken far exceeding our campaign goal. 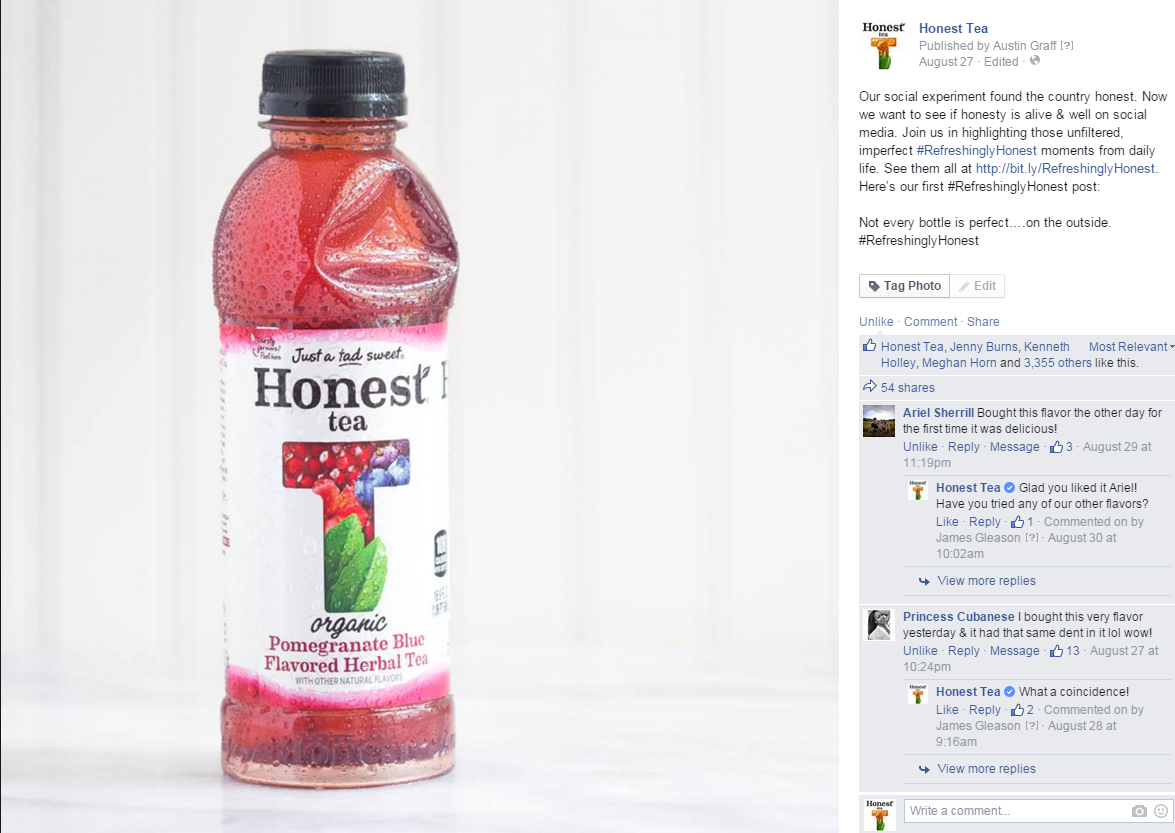 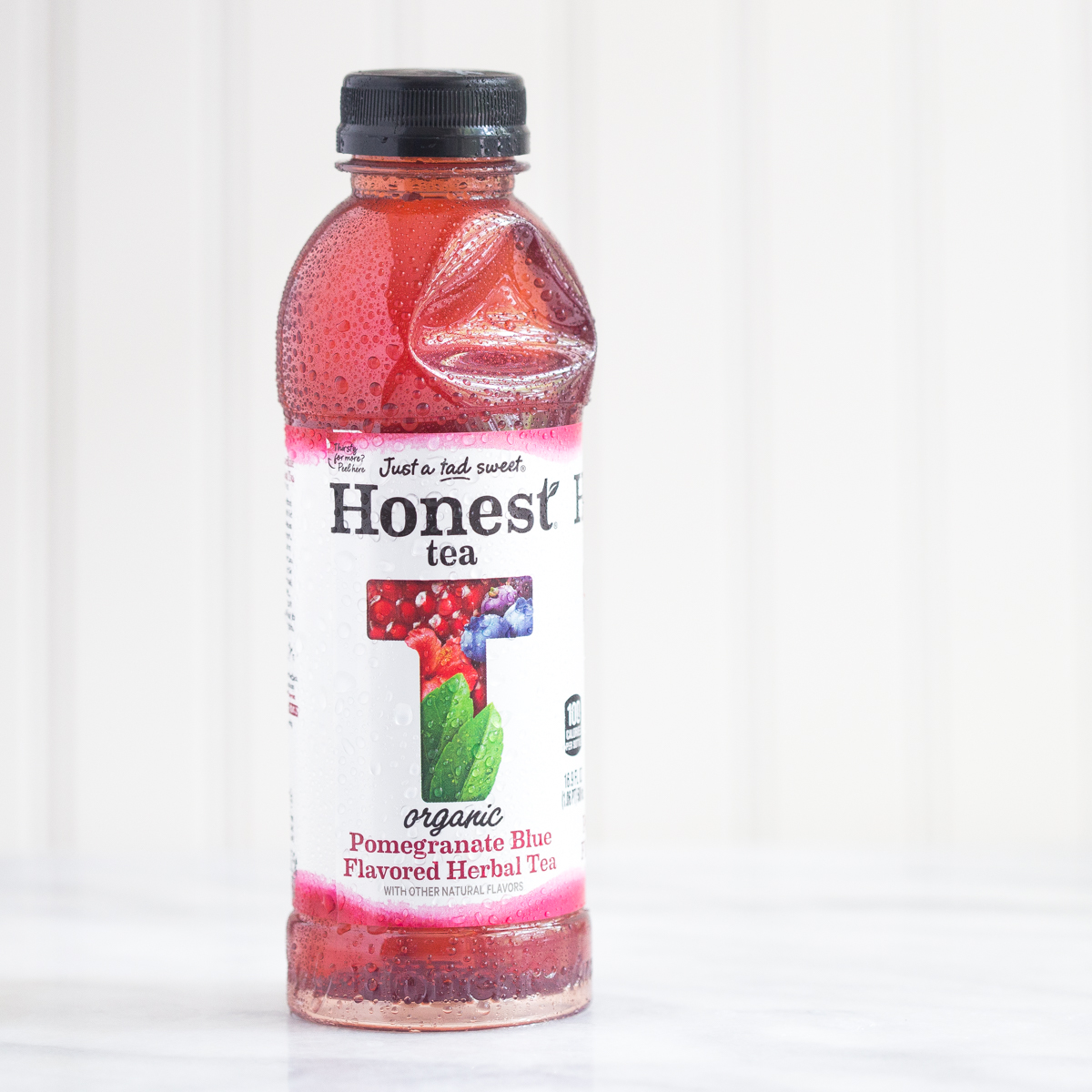 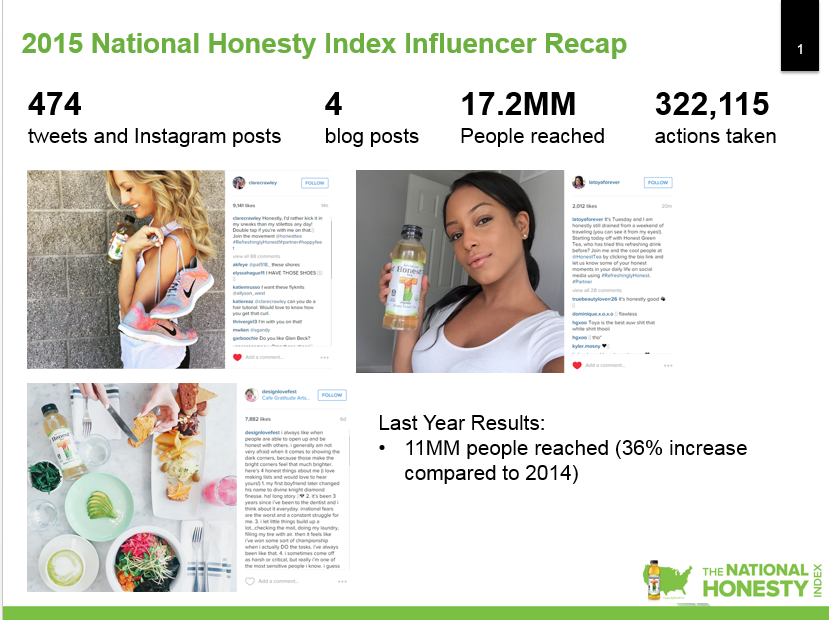