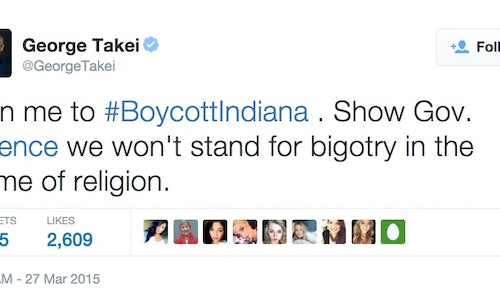 On March 24, 2015, George Takei became aware of a new bill – SB101 – that the governor of Indiana had indicated he would sign. SB101 gave business owners the right to refuse service based on proprietors' religious beliefs. The bill, entitled "Religious Freedom Restoration Act (RFRA)," was hailed by some as necessary to protect religious liberty, particularly with the (then pending) U.S. Supreme Court's decision legalizing same-sex marriage nationwide.

This wasn't the first time such "religious freedom" bills were pushed to state governors. In 2014, Arizona had a similar bill that would later be vetoed by its governor. Other states would enact similar bills in an attempt to dilute the legal power of same-sex marriage in their states.

Recognizing the bill for what it truly was – legalized discrimination similar to the "Jim Crow" laws of the past – George took action. At 78, George had experienced bigotry first hand. As a child, he and his family were forced to live in internment camps during WWII, simply because they looked like the people who had bombed Pearl Harbor. As an adult, George kept his homosexuality a secret for decades out of fear of losing work as an actor. Now an LGBT activist and social media icon, George mobilized his social media team, Team Takei, to combat the law in Indiana, using #BoycottIndiana as his hashtag to overturn the corrupt decree.

With George Takei's 11 million+ fans on Facebook and Twitter, George and Team Takei took a two-pronged approach in the battle with Indiana's governor and legislature:

1) Created viral awareness via #BoycottIndiana to draw attention to the discriminatory law.

George began with a Facebook "Call-to-Action" for gamers, as "GenCon," the biggest gamer convention in the world (65K in attendance in 2015), was set to open in Indianapolis. George encouraged gamers and other fans to call the Indiana governor and tell him not to sign the bill.

The governor ignored these calls and signed the bill into law. George and Team Takei initiated the #BoycottIndiana hashtag and encouraged socially conscience companies, conferences, and others that usually transacted business in Indiana, to join the boycott.

As #BoycottIndiana grew in power and began trending on social media, traditional media outlets reached out to George. George appeared on programs like "The Last Word with Lawrence O'Donnell," and wrote opinion pieces for MSNBC.com and The Daily Beast.

Part of George and Team Takei's strategy was to help fans truly understand the law and why it was so insidious. The team shared stories for various outlets, like The Atlantic, so fans could gain an in-depth perspective from various writers.

Through the roughly two-week period, George posted only nine times on his Facebook page, and 25 times on Twitter. Rather than overwhelm his fans with the topic, the posts were interspersed with his usual fun, humorous, and interesting pieces. The #BoycottIndiana posts included thanks to businesses and states for participating in the boycott, as well as opinion and educational pieces to better inform the fans. 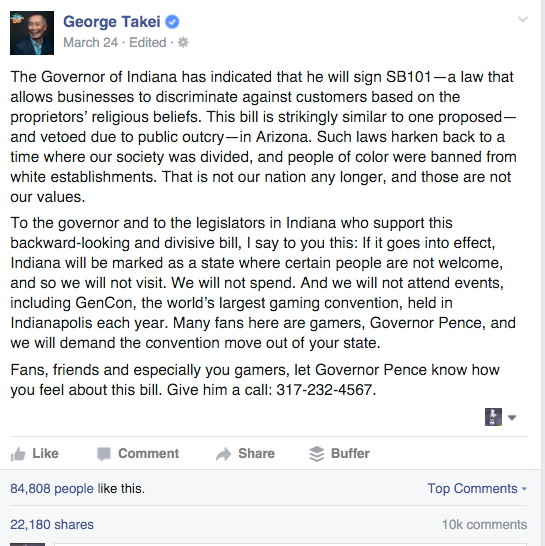 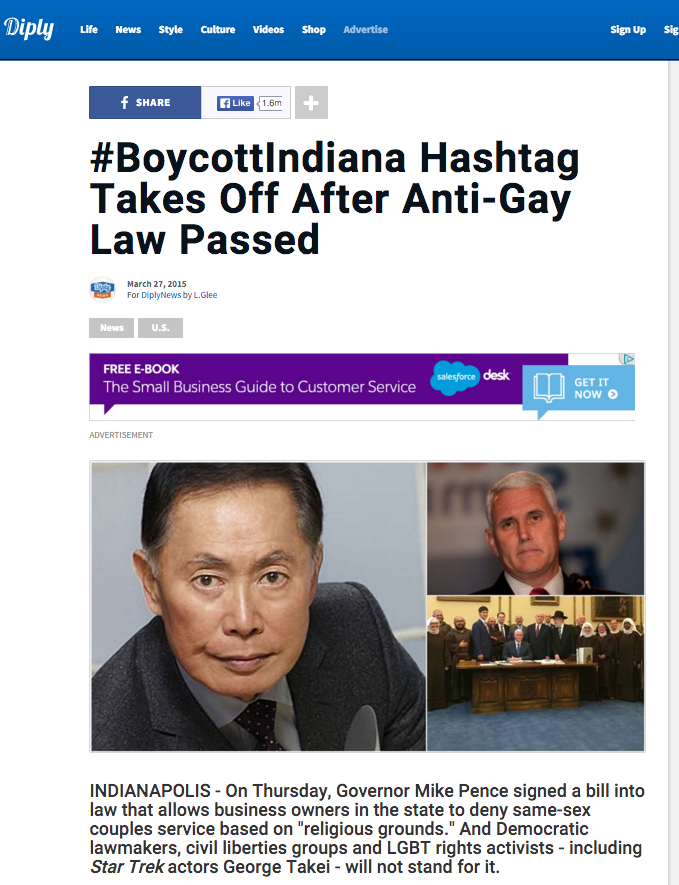 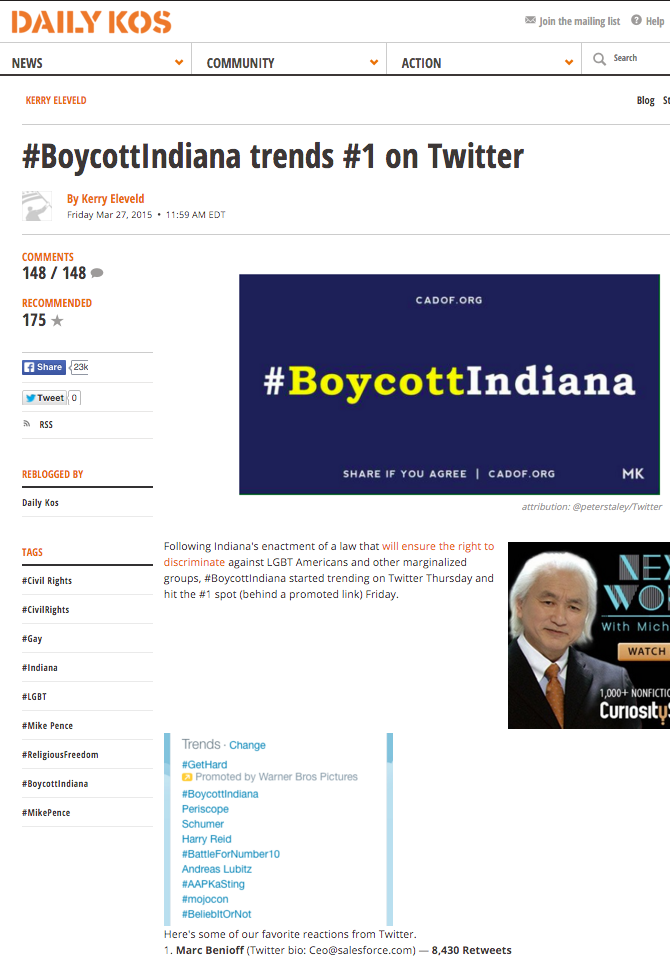 Facing mounting pressure, Indiana announced a compromise on the law, which made clear that it could not be used to discriminate against LGBT persons. George immediately reached out to Indiana with a positive message and meme, changing #BoycottIndiana to #IndianaForAll. 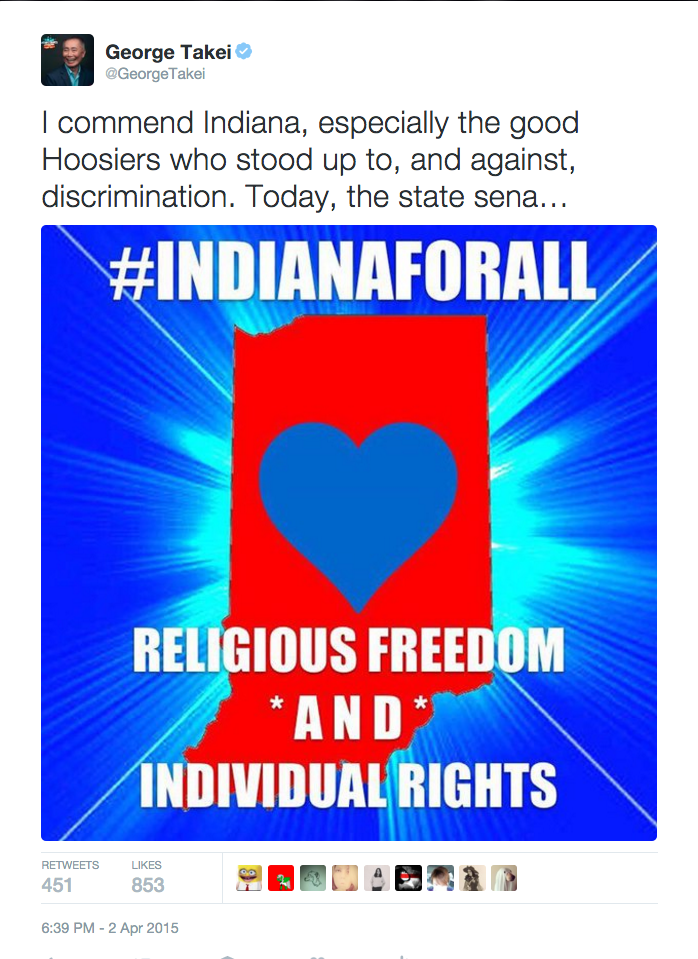 Thank you for considering our submission. 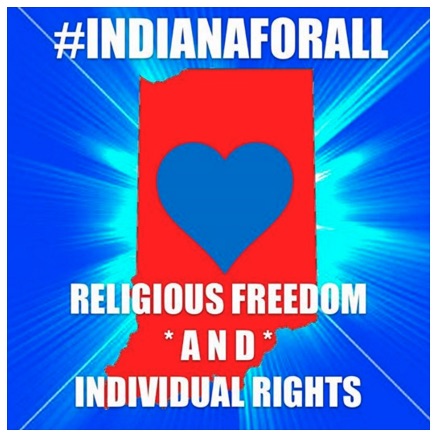 George Takei and The Social Edge