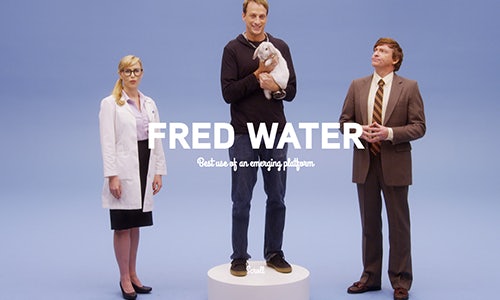 Fred Water: “Our Flask Runneth Over”

There has always been, and will always be, more pockets than cup holders. Fred Water is designed to fit the former, so you can have water with you wherever you go. Inspired by the frontier flask, Fred's bottle is comfortable to hold and easy to slip into back pockets, jackets, handbags, backpacks and pretty much anything else that carries stuff. A trusted accessory of action sport athletes, Fred Water has become a staple in skate parks and on mountain slopes across the country.

With their plastic water bottles already in 5,000 retail locations, Fred noticed that refilling their product had become commonplace. In an effort to capitalize on their pocket-friendly popularity, Fred wanted to introduce a sleek new water flask made from high-quality stainless steel. To accomplish this, Fred approached Something Massive with the directive to help launch the new stainless steel bottles.

Something Massive hatched a plan to go-to-market with the help of Fred's existing customers. The groundbreaking concept involved using the Kickstarter platform in a completely unconventional manner. Instead of thinking of Kickstarter as a fundraising site, Something Massive conceived of it as marketing platform, and built a campaign that would enable Fred's fans and target demo to "buy in" and help their beloved brand spread the word. Using non-traditional media to build up a fan base for the new product prior to hitting market was risky, but Something Massive had a feeling it was just crazy enough to work.

With the understanding that only 25% of all Kickstarter campaigns are successfully funded, and knowing that the average funding level is $10,000, Fred Water was wildly ambitious in asking its customers to support this singular new product at a whopping $50,000. However tall the order, Fred Water knew that using the platform for a marketing campaign meant that they needed to get noticed and keep all momentum going.

Most Kickstarter videos present a dry, educational look at the purpose and functionality of a product concept. Because the Fred Water flask is such a simple idea with obvious benefits, Something Massive and Fred decided to flip the script on Kickstarter videos and create a satirical send-up of the genre. While risky, the belief was that if executed properly, this humorously subversive approach would help the Fred Water flask stand out in the crowded world of crowd-funding, and potentially introduce Fred's fun and innovative personality to a whole new audience.

Written, directed, cast, shot, produced and edited by Something Massive, the video and supporting campaign elements featured skate, snowboard and surf influencers who love the Fred Water brand and were happy to share their genuine enthusiasm for a new product launch. Fans of the Kickstarter campaign were drawn into the new product through people they all but worshipped, including not only snowboard and skater stars, but also cult favorite Rhys Darby of Flight of the Conchords fame, who starred in the video and helped make it hilarious.True fans were invited to show their support for the new product twice, once when they supported the Kickstarter campaign and again (through social sharing) when they received the product.

In anticipation of the new product launch, Something Massive reimagined and redesigned the Fred Water website to be a clean, responsive experience with the new flasks front and center.

• Kickstarter goal exceeded by more than 400% 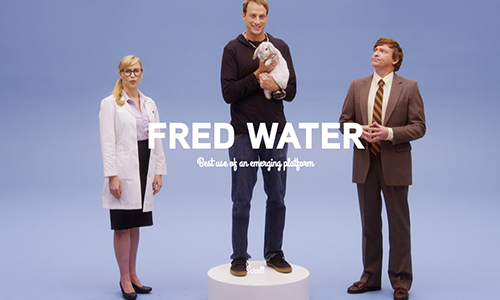