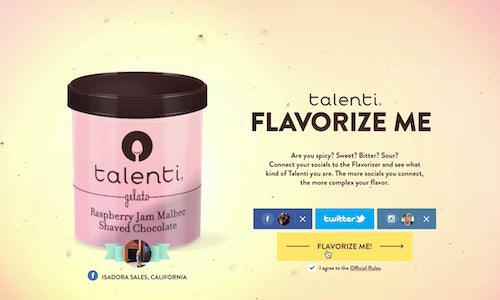 Just as the saying goes that there's no honor among thieves, it could also be said that there's no loyalty among ice cream eaters. It seems consumers' insatiable appetite for ice cream of all varieties keeps this category churning with players of all shapes and sizes. In order to protect share and promote loyalty, Talenti needed to shift from "an ice cream" to "my ice cream."

Our primary objective: Get people to engage with the brand at a personal level.

Given budget limitations, the majority of our marketing efforts were rooted in online/social engagement and activities. Below were three specific goals we aspired to achieve with our digital experience:

Goal One: Log In/Buy In. Drive active online engagement and participation with 50,000 new users (as predicted by industry best practices of expected conversions).

Our idea was inspired by a simple insight: Our personalities each have an intrinsic connection with food. We, as humans, say that things are sweet, bitter, sour, saucy, and sometimes even bananas. And we especially say these things in the digital world, where our social connections are as literal and strong as they are anywhere else in our lives. With that thought, the team began brainstorming how to digitize the relation to the myriad ways food and personality comes together.

The creative idea was Flavorize.me, a digital platform powered by a scientific algorithm that connected to users' social channels, processed the content of their posts, and generated a new flavor of gelato inspired by their personalities.

We based the pseudoscience of translating digital communications into attributes of dessert around a very specific point of view…GELATO. So, as we developed this idea, we took every opportunity to look through this lens in order to formulate our science. We sifted through more than 25,000 words like "wow," "love," and "bored," and organized those words into flavor profiles like sweet, salty, and spicy. Within those profiles, we rated each word on a scale of 1-10 to create varying degrees of a flavor. For example, "dang" was rated as a "6" on the salty scale.

We took this even further by considering what Emojis, hashtags, weird Internet words (like "duckface"), and the colors in our Instagram pictures say about our personalities. Suffice to say, we had to ask ourselves some weird questions, like whether the flame emoji was spicy or sour. Are selfies bitter? With hundreds of ingredients in the mix, there were upwards of 50 million potential flavor combinations. That's plenty of unique flavors to satisfy our variety-seeking audience.

The experience itself was simple to ensure strong opt-in levels. The flow went like this: upon entering the microsite, www.Flavorize.Me, a user is prompted to log into his or hers Facebook, Instagram, and/or Twitter account. The user then clicks through to begin, and can sit back while the site goes to work, morphing a gelato orb surrounded by key words being pulled from their accounts.

The results flow was built for extended interaction and sharing. The user's personalized flavor can be shared on Facebook and Twitter with the click of a button. Scrolling down unveils a map of the flavor as proof that real science went into the making of their unique combination, displaying their flavor profile percentages (you may be 45% sweet) and examples of key words pulled from their social feeds. Scroll down a little further, and the user will find an existing Talenti flavor selected by the algorithm that has a flavor profile most like his or hers.

Every flavor created was analyzed and examined by Talenti for flavor viability. In the end, the top six were actually made, packed into personalized pints and shipped to the people whose personalities they embodied.

The results exceeded pre-launch expectations across the board. Our planned overall goal of 46,000 flavors was passed within the first day and the campaign ended with nearly 120,000 flavors created. Site visitors spent an average of 2 minutes with the fully branded content, and 30% of site visitors were so entertained that they created multiple flavors.

We also had great success with paid and earned media, achieving over 6.488 million impressions. Flavorize.Me earned 6.488MM editorial impressions on sites like Refinery 29, Bustle and Teen Vogue. More importantly, the experience was featured on foodie sites like Food and Wine and Eater without the help of paid media. Where we did pay for it, the content over-performed every engagement benchmark. The Mashable engagement rate was 2x higher than site benchmarks, and Conde Nast Traveler had a CTR 4x higher than site benchmarks.

Although it wasn't our primary success metric, we also saw a 4% increase in general market awareness during this period, and a 2% increase in stated intent to purchase. 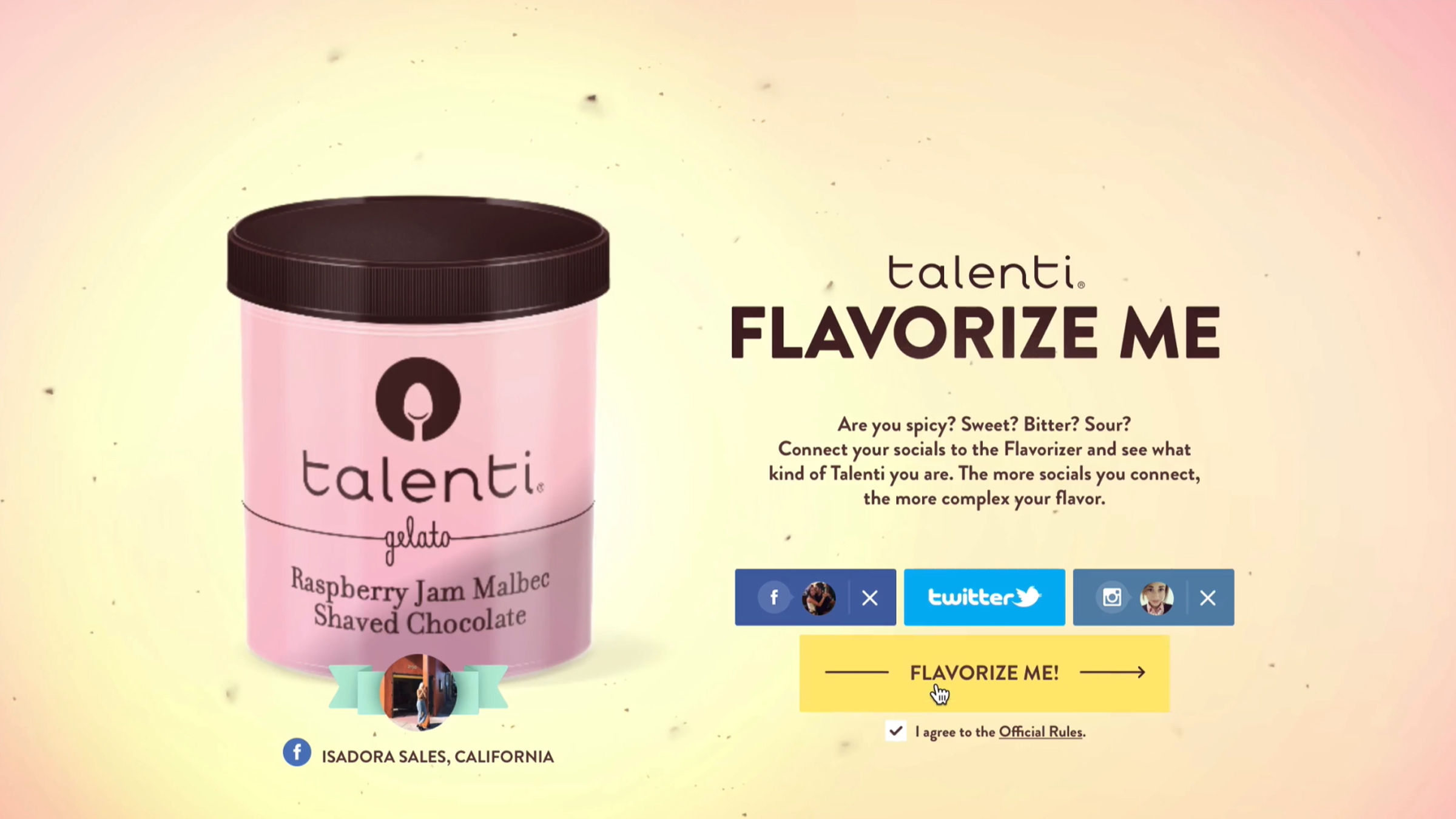