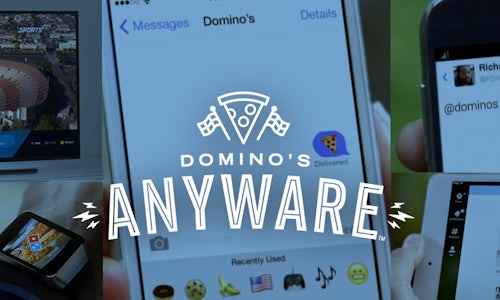 Digital orders were identified as being more profitable to the business, and yielding a higher customer satisfaction rating. In 2011, the goal was set to move the business from just over 20% digital sales, to over 50% by 2015.

To get more people ordering Domino's online we brought ordering to the devices and platforms people already use everyday rather than making them come to us. This new suite of ordering technology was named Domino's AnyWare and includes ordering with a tweet, a text, Ford Sync, Smart TV's, and smart watches. Each new way to order was introduced with it's own press release, which drove to DominosAnyWare.com where people could learn about these new ways to order. Then in Q3 of 2015, a national TV campaign featuring celebrities, with expertise in each platform arguing, that their way to order was indeed the best.

The creation of Domino's AnyWare was only possible because of the groundwork laid by previous Domino's digital innovations. A couple years ago, we introduced Pizza Profiles, allowing customers to save their payment info, addresses, and an Easy Order. An Easy Order is your favorite food order bundled with your preferred payment method, order type (delivery or carryout), and address or favorite store. The combination of Pizza Profiles and Easy Orders made it possible to order simply and quickly on twitter, smart tv's, smart watches, and Ford Sync with an interaction that fit each platform.

The Domino's AnyWare television campaign ran during the duration of Q3 2015 and generated 10.5% year over year sales growth for the brand.

AnyWare also helped Domino's achieve and exceed it's goal of having 50% of all orders be made digitally, and led one JP Morgan analyst to say, "We have found ourselves describing the 'new' Domino's as a technology company disguised as a marketing company disguised as a pizza company, and recent years of dominant outperformance, even embarrassing peers, probably bears that comment as true."