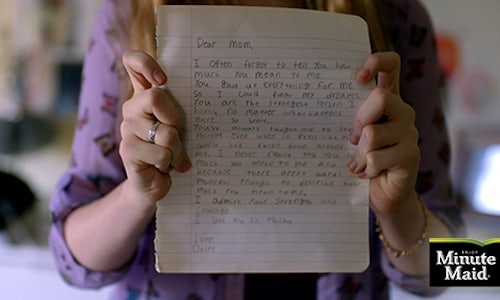 For decades, Minute Maid Orange Juice was the first thing families tasted every morning. It seemed there was a carton or pitcher in every refrigerator. But times had changed. Orange juice was no longer a given. Breakfast wasn't even a given. For the first time, Minute Maid wasn't necessarily a family staple.

Minute Maid's goal was to once again become a top-of-mind family brand, but they recognized they needed a new approach to do so.

The brand commissioned ethnographic and cultural research to better understand modern families. The study revealed a major tension point – because parents are busier than ever, they often feel like they're not doing a good enough job. This is compounded by a social media culture of accelerated judging from blogs, sites and pretty much everyone with a keyboard, who seemingly pile on the supposed misguided priorities of today's parents.

We saw an opportunity to leverage Minute Maid's long-standing role as a family brand toward a new, more contemporary brand platform – putting Minute Maid at the center of a conversation about something bigger than juice.

We all know the storyline – one of parents who feel they just aren't cutting it. Against the backdrop of long hours at work, ubiquitous technological distractions and generally over-scheduled lives, parents perpetually agonize over the job they're doing with their children. They believe they're simply too busy to possibly be doing a good job.

There's just one problem – it's not true.

According to a Pew Research Study, parents today actually spend 64% more time with their children than parents from previous generations.

So why do we so dramatically underestimate ourselves? For starters, the social conversation isn't helping. The online space judges parenting in this accelerated age swiftly and harshly, fueled by blogs, screens and sites chastising the priorities of parents who seemingly devote time to everything but their children.

We thought it was time to give parents today the credit they deserve.

Our insight was this: what self-doubting, time-constrained parents need is not more time, but a little positive reinforcement, and it led us to a very simple but powerful idea.

It's time to stand up for today's parents and start telling them:

"You're doing better than you think."

Minute Maid created an online video that lets parents know how good they're really doing –from the people who matter most, their kids. We went out to find real families with touching stories and get an honest glimpse into their lives.

We interviewed moms and dads about how they think they're doing as they shared their fears and doubts about parenting. Then we talked to their kids and discovered a different perspective, one of gratitude and appreciation.

We had the kids write their feelings down in the form of a letter, which we then gave to their parents. We then asked the parents to read their letters aloud and watched the emotions unfold. The result is this very emotional, touching and enlightening film.

The anthem film was launched on Mother's Day. It was the beginning of a series of content pieces from the brand and influential partners that lead to a change in the cultural conversation.

The anthem film was followed up with a special film for Father's Day, a touching story about a son expressing his feelings for his dad. An on-going series of boosted Facebook and Twitter posts highlighted #doingood moments, serving as a continual reminder of how all the small things parents do add up to so much more. Guest bloggers added depth to the storytelling and helped shed more light on the contrast to the typical cultural conversation. Influencers such as "The Mom's View" and "Convos With My 4-year Old" helped extend the storytelling to a wider audience.

The platform inspired a change in the cultural conversation about parenting, and provided the Minute Maid brand with a relevant voice and role in the modern family.

As of 8/31, the platform has generated 532 million impressions. More important, it has inspired 614,000 social engagements, exceeding our one for every ten goal and showing we had not only entered the conversation, we were affecting it.

Combined, the videos have received over 10 million views.

Website visits have increased sevenfold and time spent has increased 36%.

Facebook likes, comments and shares have all increased threefold.

And while it wasn't the direct objective of the platform, a reversal of sales fortune has occurred.

Purchase intent among families, as measured by the Minute Maid Juice Drink Tracker, has already grown 11%, rising from 65% to 72% 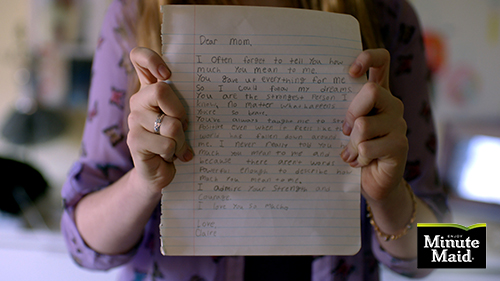