Coca Cola's communications objective was to engage with a new generation of tech savvy and Twitter-addicted consumers. It needed a socially-driven campaign with the power to cut through the crowd of competitors and encourage participation, particularly among Gen Z's (11-19).

1. Gen Z's are addicted to their smartphones, primarily using them for social media (158 index).

2. This new generation of consumers is increasingly narcissistic, wanting their 15 seconds of fame they can share with their social media following (166 index).

3. They are eager to interact with brands where possible (152 index) and expect much more from advertising than their predecessors (167 index).

The Google team worked with Coca Cola to develop a socially-driven web experience called "What's in a Name" that celebrates the stories behind each of our names.

We know that there is something pretty powerful and emotional when people find out something unexpected about themselves.

What's in a Name allowed consumers to directly input their first name into the http://name.shareacoke.com website and discover fun facts and trivia associated with their name.

Clear Channel, Google and Posterscope then worked together to find a way to use digital Out of Home to bridge the gap between the real world and the digital world.

It's only fitting that as Coca Cola is one of the biggest brands in the world, we developed and broadcast an OOH version of What's In a Name on the biggest stage in the world, Times Square, with supporting media on digital screens across the nation.

Times Square visitors could Tweet in their first name with the hashtag ‪#CokeMyName to see a personalized story about their name broadcast on the Clear Channel screen above McDonalds in Times Square.

Once a name was Tweeted, it was submitted automatically to the Share a Coke API. If there was a direct match with one of the 160,000 Share a Coke names, the API outputs factoids to the Clear Channel server. Factoids are based on historical Google data and are rendered as static cards. Every step after the tweet from the consumer was fully automated…and the entire process took less than one minute.

Every consumer who tweeted to the hashtag received a real-time response from the @CocaCola Twitter account, thanking them for their participation, written by a real human at ICUC to ensure authenticity.

As insights revealed that our Gen Z's desired their 15 seconds of fame, we displayed each individual name fact on the Times Square digital billboard…for 15 seconds.

A camera on a nearby opposite building automatically snapped a photo of each story on the digital billboard. These photos were then Tweeted back to the consumer.

All social mentions included the What's in a Name web URL, to further close the loop between the various screens – large and small – on which the experience occurred.

The board delivered 5.4MM audience impressions in Times Square over the 3-week period (per TAB).

The campaign generated 42,000 social posts with #cokemyname during that period. Note that posts from @CocaCola, responding to submissions, were only 9,800 of these; this reveals that consumers were heavily engaged throughout the campaign.

What started in Times Square, didn't stay in Times Square. Tweets with #cokemyname were mentioned in 110 countries. The US represented 49% of exposure. Within the US, Times Square was most popular, but exposure covered key metropolitan areas including Chicago, Boston, Atlanta, Houston, Los Angeles, San Francisco, Philadelphia, Miami and DC.

The campaign skewed young and female and directly connected with Gen Z's:

The campaign was picked up by industry trade media in the US. Additionally, we saw press exposure from other markets as far away as Latin America, Eastern Europe and Japan.

Video for Coca-Cola "What's in a name?" Times Square 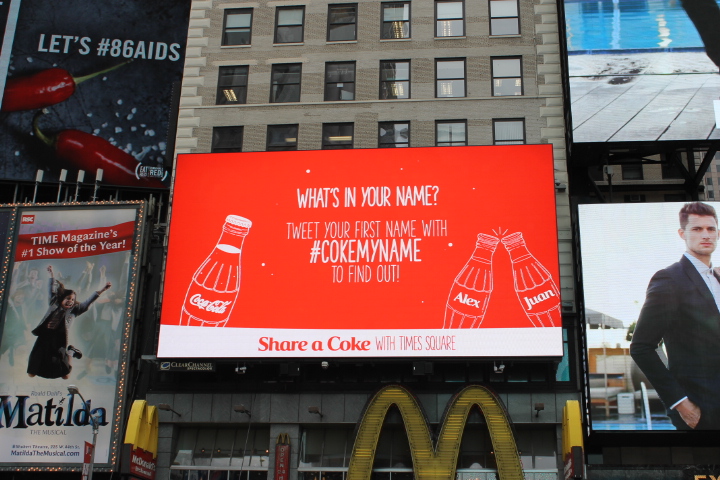 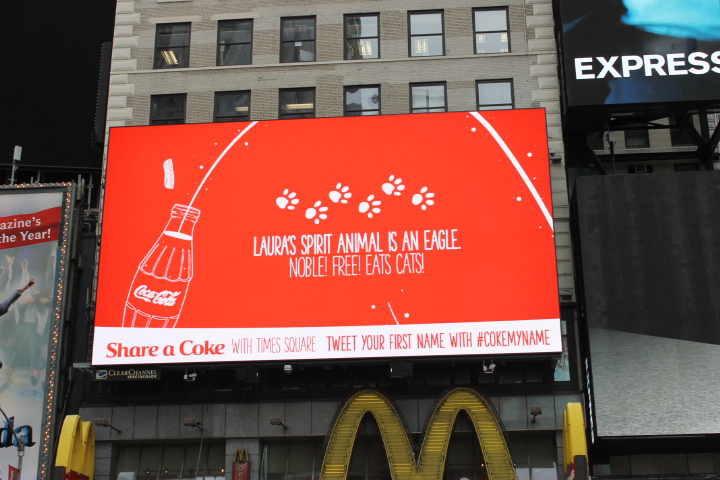 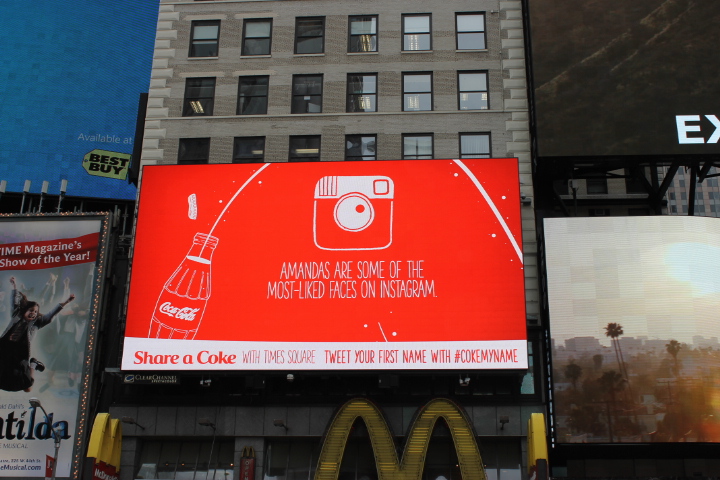 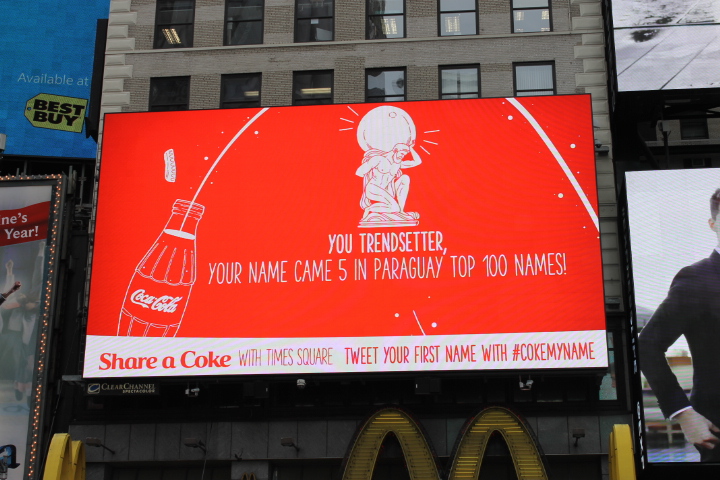 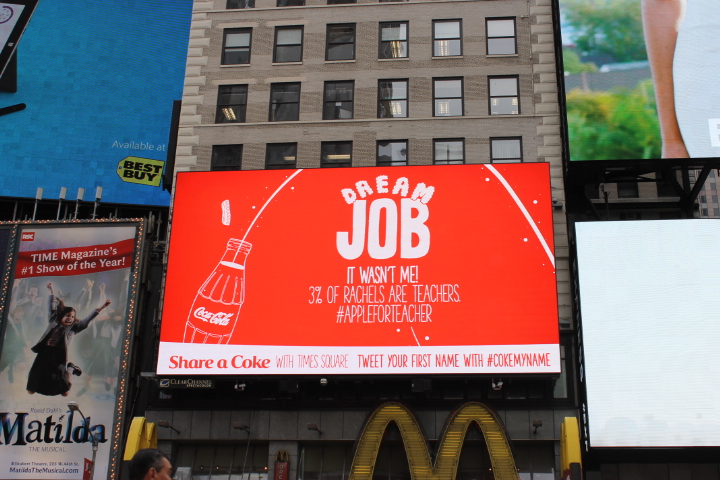