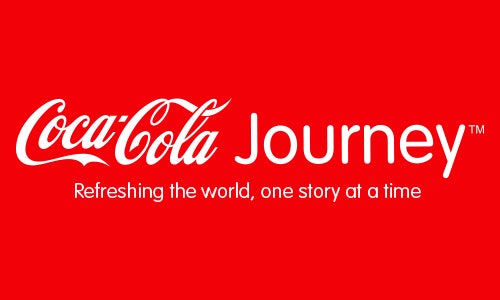 In November 2012, The Coca-Cola Company reimagined its traditional corporate website with the launch of Coca-Cola Journey, a resource designed to expand the company's commitment to brand-consumer engagement. For the past three years, Journey's digital magazine-style content strategy has managed to unify Coca-Cola's messaging across digital platforms so that what was initially a standalone campaign has developed the agility to serve as an aggregate of the company's news and major initiatives.

With a carefully curated balance of branded and unbranded articles, multimedia content, features by guest writers, and stories sourced from Coca-Cola employees and enthusiasts alike, Journey has steadily become a leader in the industry for creating sharable, authentic content with the flexibility to reach followers on the their preferred digital platform.

Throughout 2015, Journey's editorial efforts focused on building brand love and corporate trust through content that told the company's story, reflected its values and passions, championed its initiatives, and humanized one of the world's most-loved brands. Thus, Journey serves as the company's foremost newsroom, PR tool, campaign launch vehicle, and social media hub.

Journey's dedication to evolving with its readers' interests and Internet habits has contributed greatly to its ongoing success. Building and retaining a strong social following on Facebook, Twitter, LinkedIn, YouTube, and most recently, Instagram, has bolstered Journey's ultimate aim to not just tell stories, but to share engaging, relevant content that ignites conversation across digital and social platforms.

The inclusion of brand journalism in Coca-Cola's communications strategy has engendered more meaningful engagement between the brand and its global consumers, journalists, employees, and stakeholders than ever before. For Coca-Cola's Digital Communications & Social Media team (the people who produce and promote Journey), winning readers' trust only comes from producing authentic content and engaging directly with followers on all its digital platforms.

In 2015, with the launch of a new Instagram account and a healthy follower base established on Facebook, Twitter, and LinkedIn, the team explored ways to engage on newer social media platforms. An in-depth report analyzed the capabilities of Periscope, Reddit AMAs, Snapchat, and more. The Journey team identified features of each platform to best support Journey's goals and adopted new social media strategies throughout the year, including a Periscope live-stream, a series of Twitter chats, and a cross-platform campaign linking Twitter polls and LinkedIn content.

From the inaugural Periscope stream of the Special Olympics World Games Opening Ceremony to live Twitter chat Q&A's, real-time engagement is steadily expanding for Coca-Cola Journey. When Coca-Cola took to Twitter, challenging followers and fans to share a virtual "cheers" using the emoticon-generating hashtag #ShareaCoke, they managed to set a Guinness World Record. The Journey team leveraged that momentum with a Twitter chat featuring employees from Coke and Twitter who worked on #ShareaCoke, promoting transparency while offering social and editorial support for the campaign. Twitter chats on topics like the Coca-Cola Scholars Program and the hugely popular world of eSports also took place in 2015. Journey's multi-channel, cross-promotional social strategy brings stories directly to target audiences, through shared images and excerpts that drive back to Journey pages.

With an initial goal of having the Journey campaign maintain relevancy in the age of social media and mobile technology, the site's real-time publishing capabilities have evolved to deliver timely, culturally relevant stories, then promote that content where consumers are already focusing their attention: social media. While 2015 produced many popular stories, one unexpected moment allowed Journey to flex its real-time publishing muscles by leveraging a unique pop culture moment.

In May 2015, Coca-Cola heard in confidence that its iconic "Hilltop" ad would be featured in the series finale of AMC's Mad Men. With limited time or context, Journey's editorial team acted quickly to enhance a previously published "Making of Hilltop" story from 2012 and develop content across all platforms. Once the episode aired, Journey promoted the content on social media, posted a recap of the finale to the blog, and shared an interview with Mad Men's creator about the inclusion of "Hilltop." These efforts resulted in 170k+ visits to the Mad Men content package, with "The Making of Hilltop" becoming Journey's 2nd most-read post of all time. The story was picked up by dozens of media sites that rarely promote Journey content, including The New York Times, Wall Street Journal and Vanity Fair.

Journey's ongoing initiatives are focused on amplifying social media engagement, an approach which has helped the company achieve its metrics goals, as well as promoting passion and consumer interest for the brand, as a whole. The Journey team regularly collects data on site performance, engagement level, and EOI (Expressions of Interest: a proprietary algorithm designed to measure the performance of different types of content over time), to ensure content is relevant and interesting to readers. Ultimately, EOI and other metrics that focus on content-sharing and commenting are the Journey team's favored reflection of how Journey content inspires consumers to start conversations across social media. This research informs thoughtful social strategies unique to each channel (encompassing both organic and paid posts).

There are many avenues to explore for brand storytelling and content marketing across digital platforms, but these statistics are an indicator that Journey has succeeded in using brand journalism and social media to position Coca-Cola Journey as a top-tier resource for engaging content surrounding the brand, the industry, and the Coca-Cola Company's diverse global community. 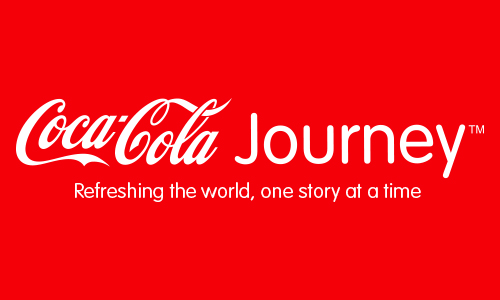 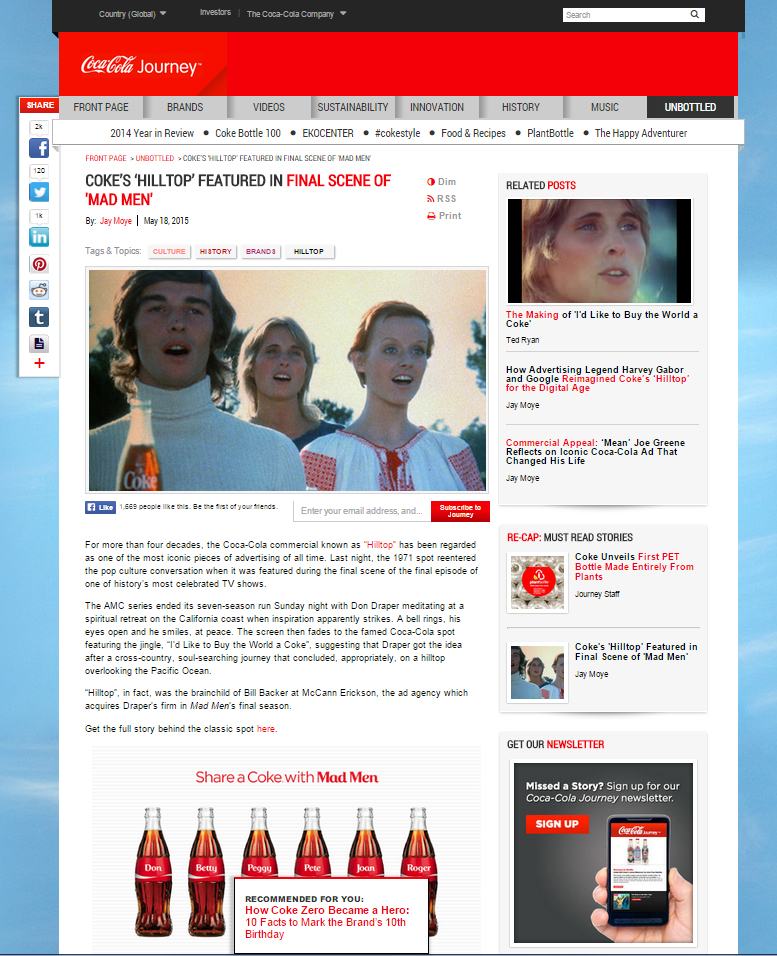 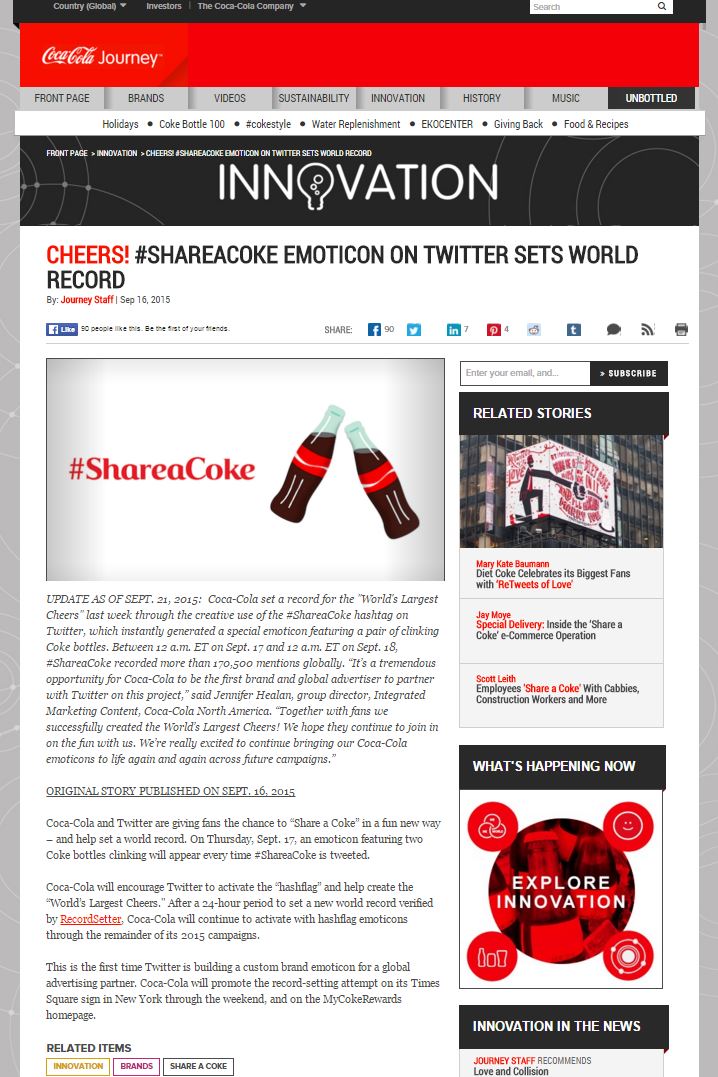 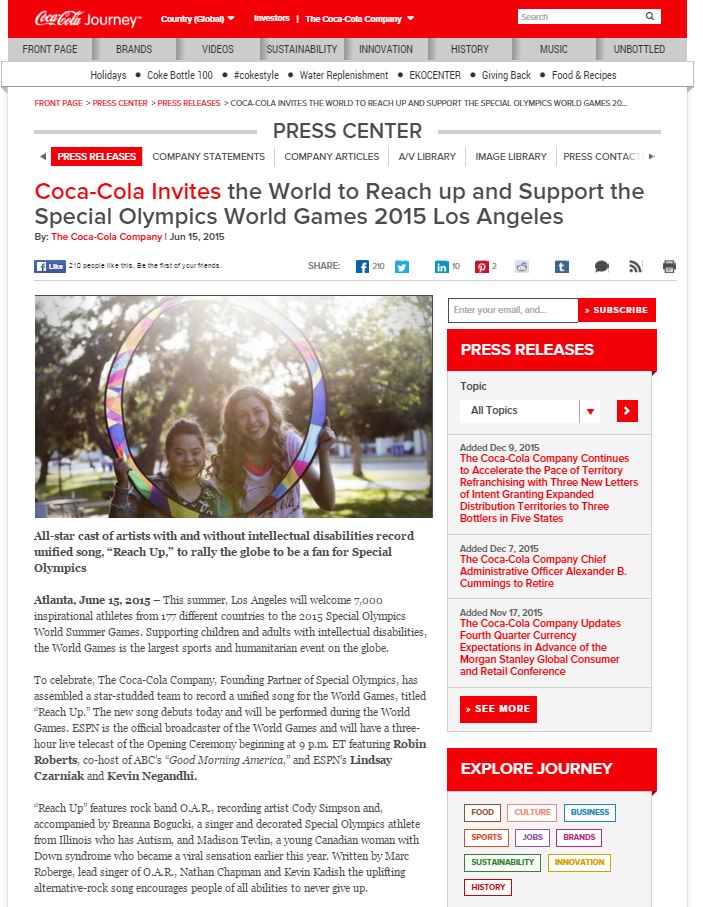