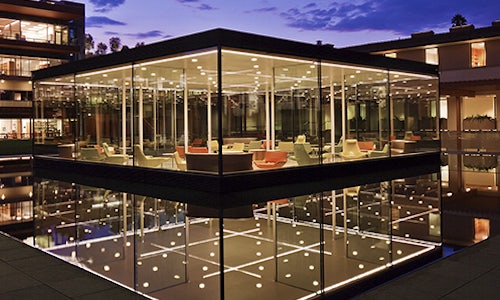 In October 2015, Business Insider named Claremont McKenna College (CMC) the Best College Campus in America: http://www.businessinsider.com/the-best-college-campuses-2015-10 Our main goal was to leverage that accolade through the use of photographs of the campus on Instagram in order to draw more prospective students to consider applying to the college by highlighting the setting and beauty of the campus as well as the sunny climate.

The Claremont McKenna College (CMC) campus is beautiful in a very modern 21st century way unlike the classic traditional looking college campus, particularly with the new Kravis Center and the glass cube known as The Living Room, both of which were designed by New York-based architect Raphael Vinoly. We called the campaign #SeeCMC. The College is located in a stunning setting near snow-peaked mountains with the L.A. metropolis just 35 minutes away and enjoys 284 sunny days per year. Our plan was to not only highlight the campus itself but also the sense of community on campus by interspersing photos of the campus with photos of students and others interacting on the residential campus. Members of the CMC Public Affairs & Communications team also wanted to capture those moments when the campus was especially appealing and those times would often be at sunset and sunrise. Our team members would rise early to capture the dawn as well as stay later to photograph and post the evening sunsets. The combination of day shots, sunset, sunrise, and community shots helped create a sense of a campus that visually reflects a contemporary sensibility and educational focus.

The results included more applicants from East Coast and Mid-West regions as well as an increase in applications from international students. We also saw a rise in the number of followers of the CMC Instagram account. Because of this campaign we also post the photos from Instagram on our Facebook account as well as have an Instagram photo of the week highlighted on the College's homepage slideshow.