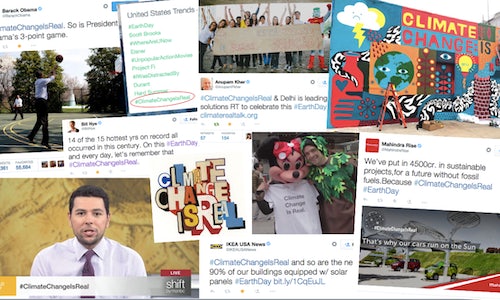 #ClimateChangeisReal was an ownerless campaign created by Here Now for Earth Day 2015, to help focus it on Earth's greatest challenge: climate change. The campaign reached 265 million with posts from diverse voices like President Barack Obama, Marnie the Dog, Mark Ruffalo and Adrian Grenier, the Smosh Brothers, Nike, Unilever and others all posting in solidarity with the same message -- Climate Change is Real and so are the solutions.

2015 was a huge year for climate action, with the COP21 summit in Paris coming up, and the UN Sustainable Development Goals being agreed upon. Given Earth Day fell early in the year, we saw it as a key opportunity to set a tone for big ambition, and to start to engage mainstream publics in a fun and accessible way through a creative content series and social media campaign.

The campaign was a celebration of the positive progress being made on clean energy and climate solutions, and had a playful tone of voice in contrast to typical sober and gloomy communications on the issue. The slight bite in the "climate change is real" messaging and subtle dig at deniers gave the campaign some clout and currency, leading to far more organic activity than other, more bland frames.

We designed #ClimateChangeisReal to be ownerless, unbranded and easy to support, yet feel like a litmus test on attitudes to climate change, and sought to engage the broadest possible mix of partners and participants.

We approached an incredibly diverse group of partners – from multinational corporations, NGOs and politicians to internet pets and street artists, and ended up working with over 200 partners to flood the internet on Earth Day with the message that climate change is real, and so are the solutions to address it.

While we provided guidance and the messaging framework, the fact that the campaign was ownerless and open enabled participation by all of these groups in bespoke and tailored ways to suit their brand and audience.

The result was broad participation, a wonderful array of creative interpretations of the concept, and an incredible diversity of content: from social media posts and memes to art, film and articles, reaching the broadest possible audience.

Aggregation of all the content on the dedicated platform climaterealtalk.org helped bring together and amplify these diverse voices, and the site's take action page enabled users to invite public figures to join the conversation.

With Real Talk, we sought to reinforce and activate mainstream public awareness that climate change is a real and pressing challenge, while linking this to strengthened awareness of hopeful solutions.

We wanted to activate powerful non-traditional mobilizers such as celebrities, public figures and consumer brands, giving them an innovative, accessible and appealing way to trial engaging their mainstream constituencies on climate change.

Through this, we intended to increase the sense of positive zeitgeist around climate issues,increasing social proof and momentum for climate action.

Over 200 partners and thousands of citizens across five continents helped us reach over 265 million people with our messaging in a single day.

#ClimateChangeisReal was the highest performing climate campaign on twitter on Earth Day: >93K posts from >82K unique users created over 483 million impressions on social platforms, and #ClimateChangeIsReal trended on twitter in the United States – helping counter the country's small but vocal minority of deniers in a year when the term "climate change" had even been banned in some states.

These influencers helped create social proof for the campaign and drove the 91.6% of the posts on the hashtag that came from retweets and sharing.

We saw groundbreaking participation from over 20 major companies, including Nike, IKEA and Virgin. For some of these it was the first time they had gone on the record to publicly state their support for climate science and action.

Over 75 artists – documentary filmmakers, animators, graphic designers, musicians and street artists – created original content for the campaign. Powerful original pieces included Vanessa Black's Kid Warrior, which had >190K views and was featured by MSNBC, Esquire, and Huffington Post (among others). 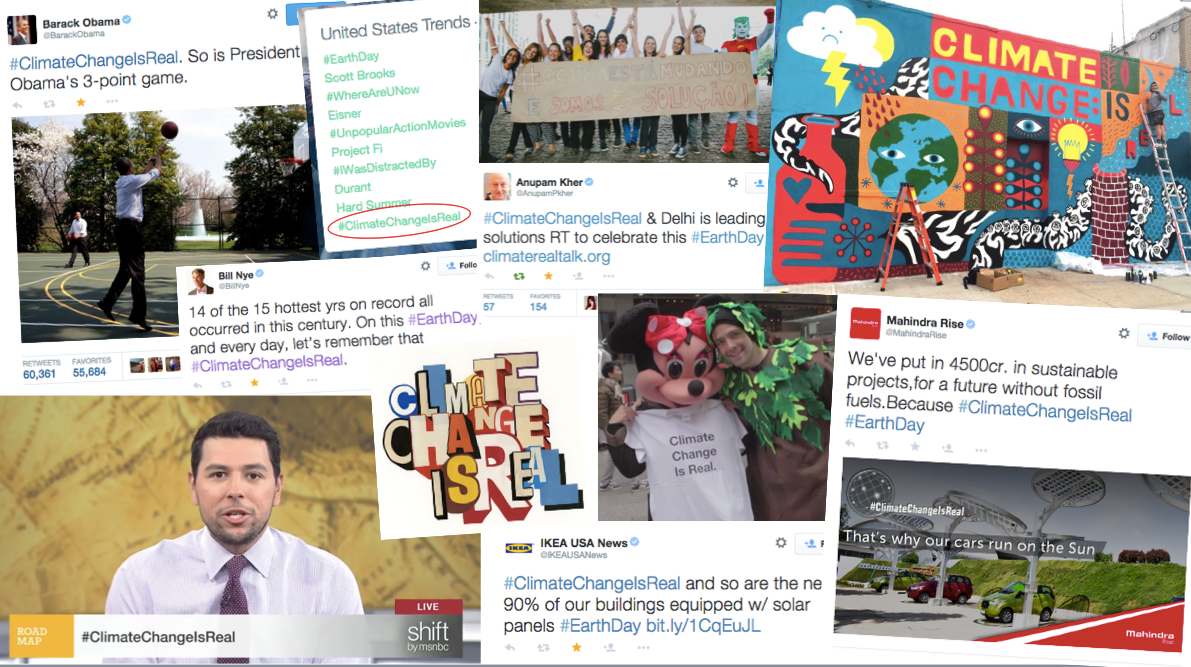