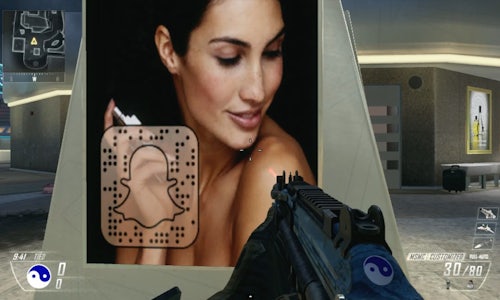 Call of Duty: Hack in Black

Activision's Call of Duty series has consistently delivered some of the biggest launches in entertainment, with 2014's installment, Call of Duty: Advanced Warfare outselling all other video games that year with over $1 billion in sales. But with 2015's installment, a continuation of the Black Ops sub-franchise, Activision faced a unique challenge: over 12 million gamers were still actively playing 2012's Call of Duty: Black Ops 2 online each day and were very happy with their experience. To introduce Black Ops 3, Activision tasked us with developing a campaign that would specifically excite these players with first hints about the sequel in a completely unexpected way that would shock the base and reverberate to the masses. They wanted to leverage technology in an innovative way that could drive widespread speculation and find a platform to tease elements of the game's story.

With millions of players still actively playing Black Ops 2 each day, we knew there was only one way to truly shock and grab their attention: hit them right where they were… by hacking into the game itself. We would execute the first ever in-game integration with Snapchat by creating the appearance of a "hack" into the Black Ops 2 online multiplayer maps. We would then leverage Snapchat to release content to get fans speculating about Black Ops 3 ahead of its announcement.

Snapchat's explosive growth with Call of Duty's core target demo of 18-34 year-olds and its ephemeral nature made it an ideal platform for clandestine tease content that could play off of the secretive nature of Black Ops.

Working with Call of Duty developer Treyarch, we secretly "hacked" the Black Ops 2 online game code and deployed the update to millions of Xbox and PlayStation consoles around the globe. Disguised as part of a standard game update, Snapchat Snapcodes were embedded into the game, hidden in various locations in the game maps. Players who found the Snapcodes and scanned these images with the Snapchat app would be taken directly to a Call of Duty account where the first clues about Black Ops 3 were waiting to be decoded.

Within hours of the Snapchat Snapcodes being deployed, players began discovering them, and word spread like wildfire. Thousands upon thousands of fans began snapping the Snapcodes and flocking to Call of Duty's Snapchat account to see what would happen next. It wasn't long before the entire Call of Duty community was buzzing about the discovery and what it could mean.

Through a series of cryptic videos released over the following days, we teased themes central to the game's story, driving speculation to a fever pitch and ultimately culminating in the official reveal of Black Ops 3.

The results of our Snapchat campaign were explosive. Hundreds of thousands of fans followed the Call of Duty Snapchat account, generating 6 million engagements with the tease content. An additional 50 million views took place on Youtube, driven by fans picking apart every frame of teaser content. In just 5 days, the campaign generated over 1.3 billion earned impressions and 700,000 social mentions, making it the biggest Call of Duty reveal ever. Black Ops 3 went on to become the biggest entertainment launch of 2015 with over half a billion dollars in sales in its opening weekend.

Video for Call of Duty: Hack in Black 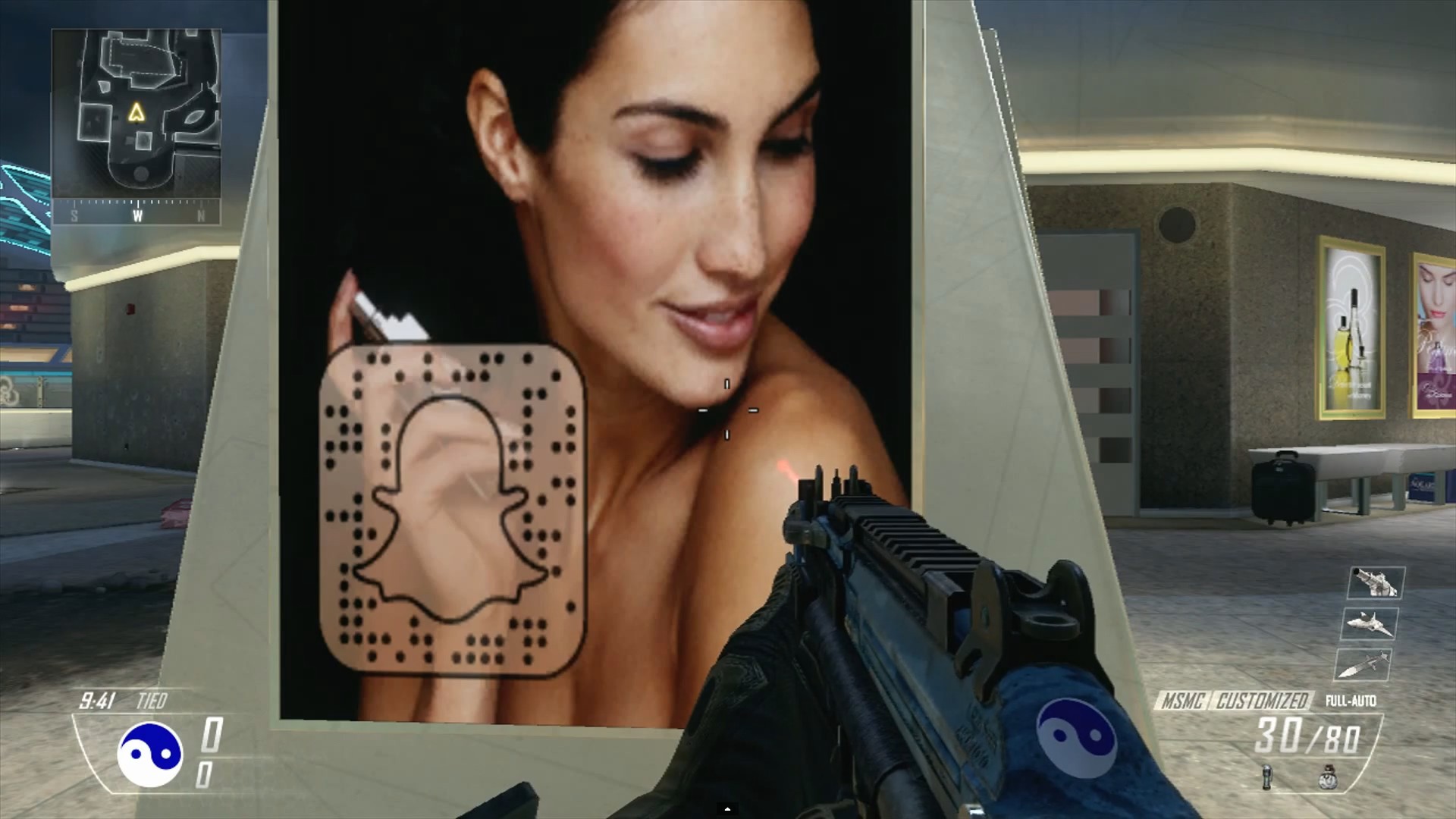 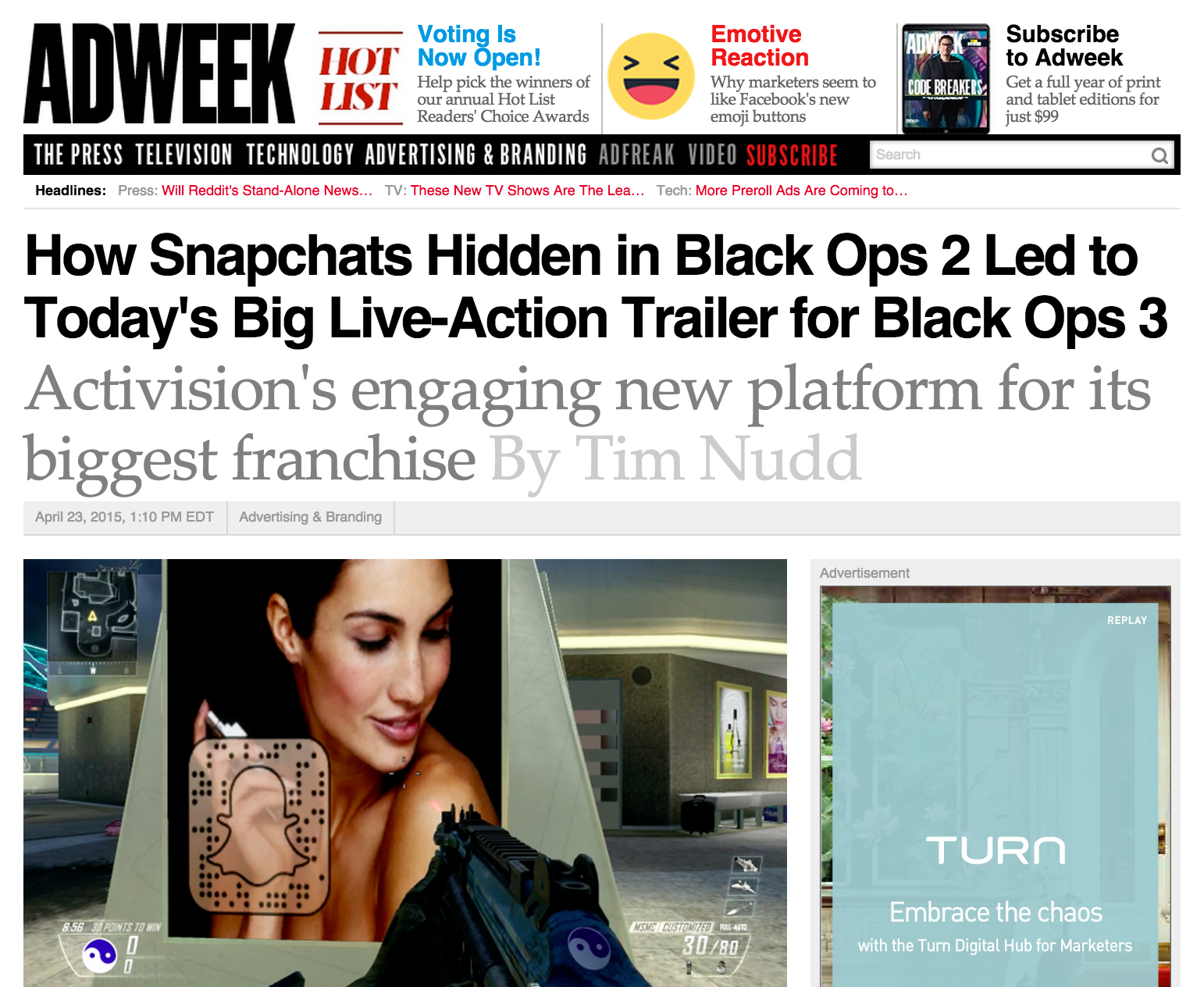