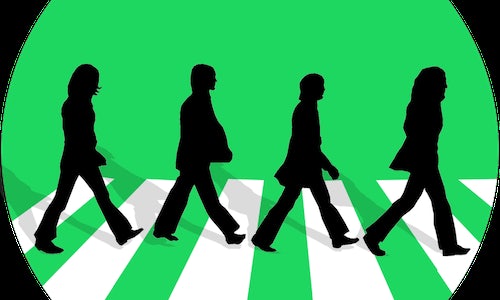 Spotify is notable within the music streaming space for its ability to help listeners discover new favorites, and for its vast selection of playlists to soundtrack every moment, mood, and genre. Given the heady competition for streaming destinations, the campaign strategy emphasized discovery and curated playlists in order to drive listeners to consume the catalogue on Spotify.

The campaign stood out from other services' promotions both in its optimization for each of Spotify's social platforms and in its breadth. The plan was crafted our plan to engage not only Beatles fanatics, but also a younger generation for whom generic messaging would not resonate. By introducing a Twitter engagement campaign that centered on the use of emojis to generate playlists and Snapchat filters, we applied a contemporary lens to the experience of consuming The Beatles' catalogue that helped engage our younger demographic who were not as familiar with the band.

To support the catalogue launch on 12/24, we executed a 'roadblock' of content across all of Spotify's core channels, focused around the holidays and gift giving, inclusive of 20+ targeted content pieces, a Twitter takeover campaign with a custom emoji and on demand playlist generation for key terms, and a Surprise & Delight engagement strategy. We kept conversation going post-launch through community management and Surprise & Delight for top Beatles streamers.

Snapchat: We brought classic Beatles lyrics to life in Stories through beautiful illustration. (to generate awareness and drive interest).

✔ Drove Streaming: The Beatles became the most-streamed artist on Spotify from December 24th - 26th, setting a new record for simultaneous streams of a single artist. So far, the campaign has generated over 250 million Beatles streams in 58 countries.