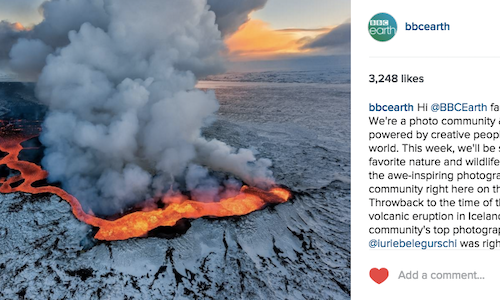 500px is a global online photography community. The company has over 7 million users worldwide. BBC Earth seeks to inspire you by sharing the incredible wonders of our universe. BBC Earth's followers on Instagram and 500px followers are very closely aligned, lovers and photographers of beautiful imagery, including with a focus on photos of nature and wildlife.

500px relies on social platforms including its blog (with over 1.5 million readers per month), Facebook (780K followers) and Twitter (approximately 500K followers) as a way to attract and engage users with 500px content while they are on those platforms. Having built a strong base in these core channels, 500px is now building its presence on Instagram to tap into Instagram's focus on photo sharing and grow 500px user base.

Having built a strong and engaged follower base on Facebook (5million followers) and Twitter (approximately 285K followers), BBC Earth launched its official Instagram account as part of BBC Worldwide Digital Studios in December 2014. The account is used to showcase not only the incredible photography BBC Earth's world-leading film crews, but also the work of its talented Earth Capture UGC community.

500px and BBC Earth launched an Instagram takeover – each company took over the others Instagram account for one week in October — in an effort to help each gain awareness of their respective brands, engage with a new audience, grow their Instagram following and attract new users.

The collaboration was foremost a way for each company to leverage the power of the other's brand and to capitalize on their Instagram audiences in a way that was both creative and experimental.As a result of the collaboration, 500px increased its Instagram following by 5% within a week and gained awareness of its brand with over 100K of BBC Earth's loyal and engaged audience. 500px also benefitted by aligning their technology start up with a long –established global consumer brand.

The collaboration also gave the BBC Earth Instagram account a 5% increase in followers, pushing the number over the 100k milestone. Aside from follower growth, the takeover with 500px introduced BBC Earth and the Earth Capture community to a new, and highly engaged, community of photographers. 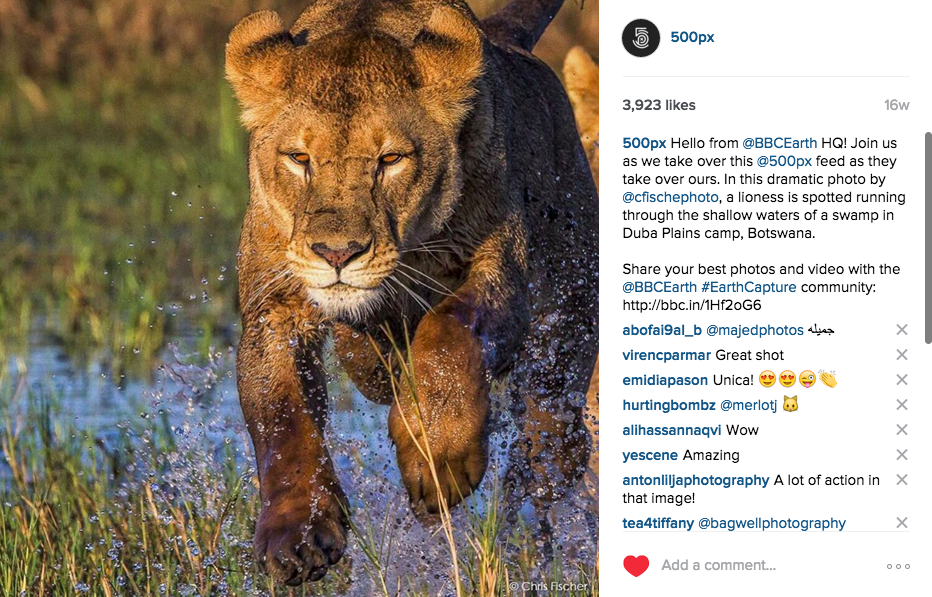