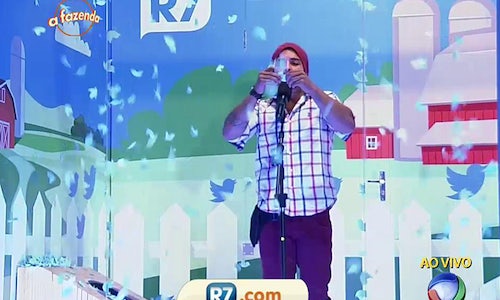 A Fazenda became so huge and such a success that it could be labeled as Brazil's biggest reality TV show right now. Now in it's 8th edition, the brazilian version of The Farm had a great integration with social networking last year - becoming a Shorty Awards finalist, beating rivals like CNN, American Idol, E!, WWE, Big Brother and ESPN.

Our goal was to raise the bar for 2015. To create a better, edgier strategy. We, once again, teamed up with Twitter, our long time partners, to accomplish that. TV and social, alone, were not enough for us anymore - we should extend the plan to the physical world. And what came up was a daring idea: make real tweets "rain" over a participant, live. The plan was to unite live broadcasting, Twitter feed and a concrete, material, interference - something never done before.

As we teamed up with Twitter, the boldest idea that came up was to physically interfere on live television. We would print the tweets and let reality show participants (confined from the outside world) read them. Why not make it a rain, then? The tweets would pour, and they could pick whatever they could and read.

The plan evolved, and we chose to give the benefit of knowing what the public thought only to one contestant, instead of giving it to all of them - for it's a huge advantage at a confinement show. To make it an exclusive experience, we projected a giant box, somehow like a giant booth, where the chosen one would get inside - and have the tweets rain over him or her.

First, we got the booth done. A wooden box with something around 68 square feet, two fans blowing the tweets around and two tubes pouring tweets from the top. The glass side facing forward, for the camera, and an ambience with our visual identity (resembling a farm, with Twitter Larries around).

We explained the mechanics to our viewers and Twitter users, both on TV and on Twitter itself, for 4 straight days. Only tweets containing the hashtag #AFazenda would be considered for the Twitter rain. And we had far enough, since our average tweet counting per episode is above the hundred thousand. We, then, selected the best among them.

At the very day of the rain, the booth was relocated to the reality premises and built up. Then the participant chosen to be inside went in, had the privilege of reading the tweets and came back to the confinement. That's the outcome:


After that, we showed how everything worked at our exclusive online show. Our hostess went inside the booth and even read more tweets.

And, for the finale, we had a GIF generator for the participants. They could build their own photo GIFs and post it directly on @fazendarecord, using Twitter's Mirror:

During the 3 months that the show was aired, we had hundreds of trending topics in Brazil and WorldWide. Just to give an example, the finale, with #FinalAFazenda, reached the top WW TT.

Twitter itself also makes public, weekly, what are the top 10 most commented TV shows in Brazil, the ITTR (IBOPE Twitter TV Ratings). Many of our episodes - on an average of 4 or 5 a week - were in that list, dominating the 3 months it was running. According to that ranking, #AFazenda had, at least, 150 MILLION Twitter impressions and something between 3,5 and 4 MILLION tweets about the show. 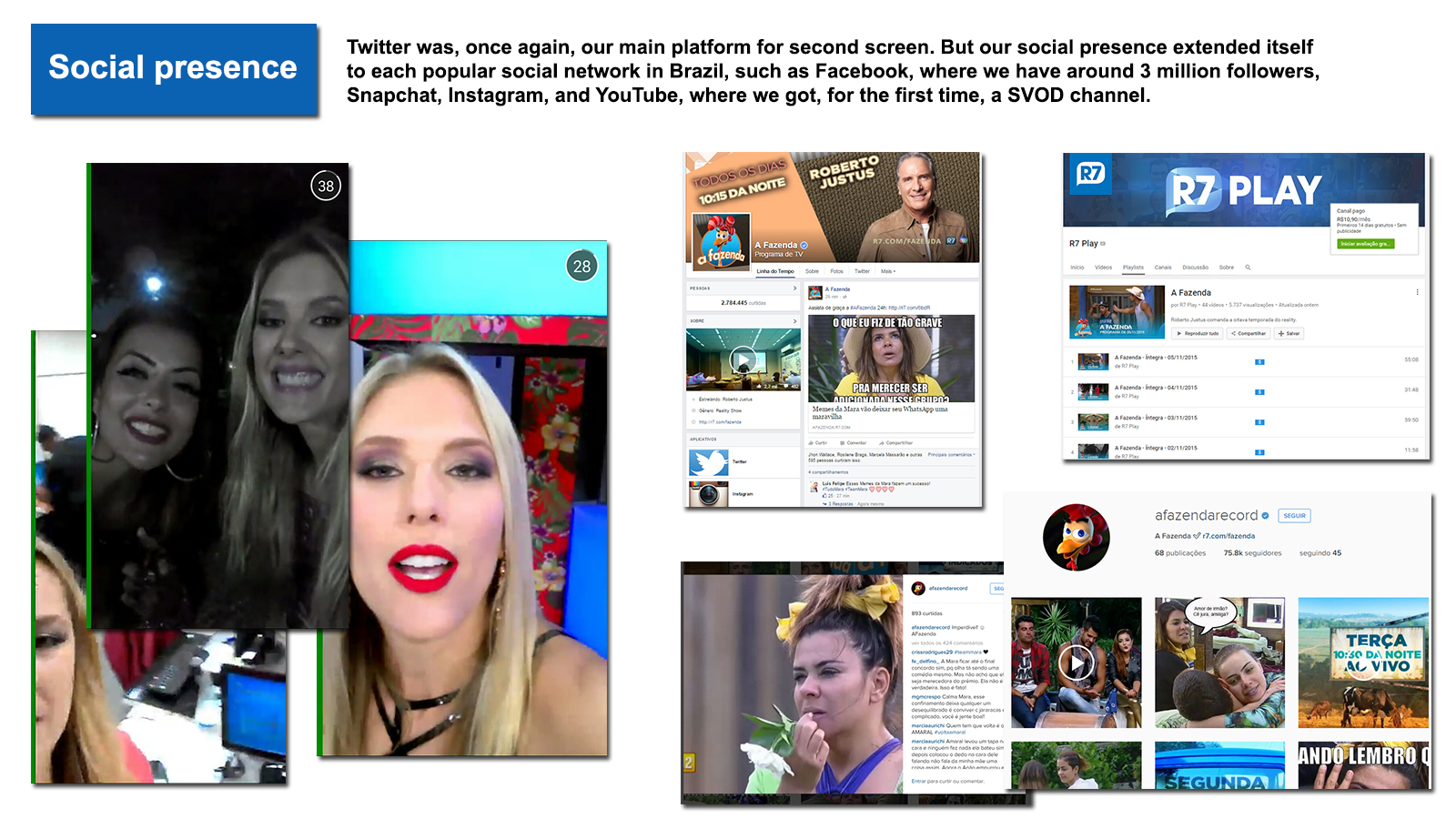 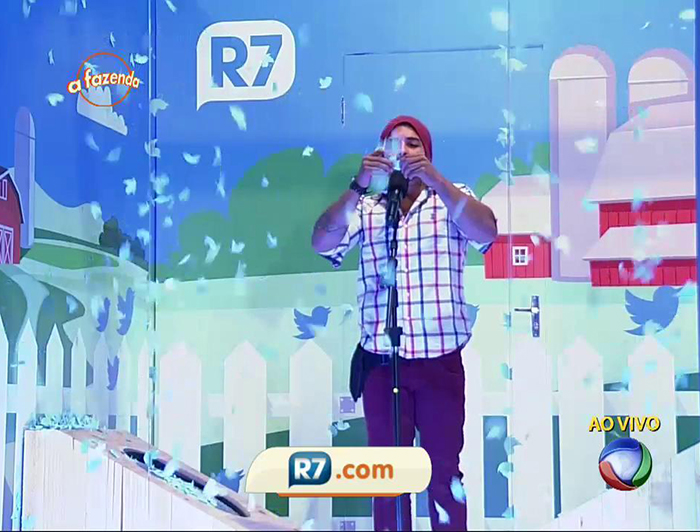 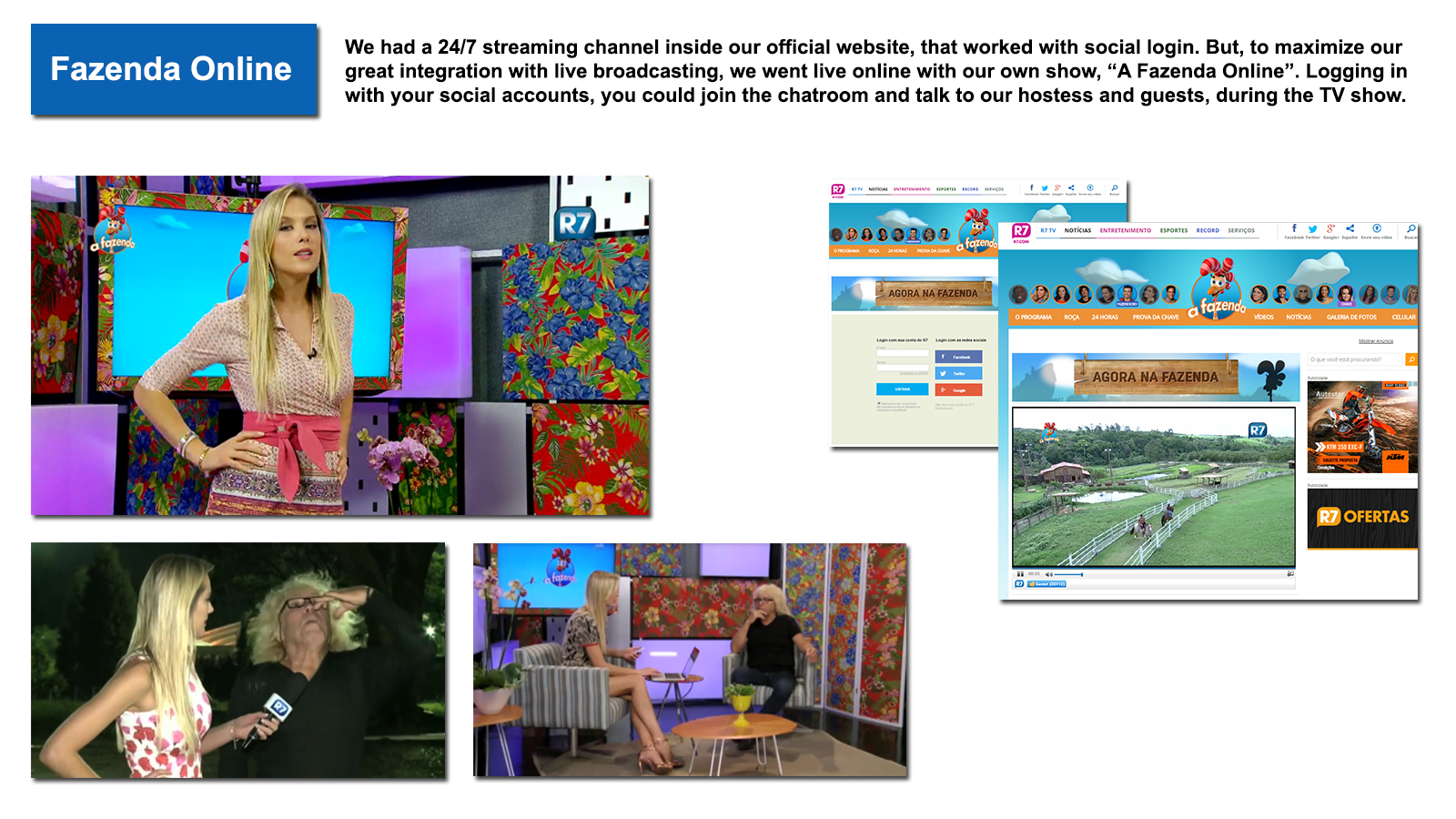 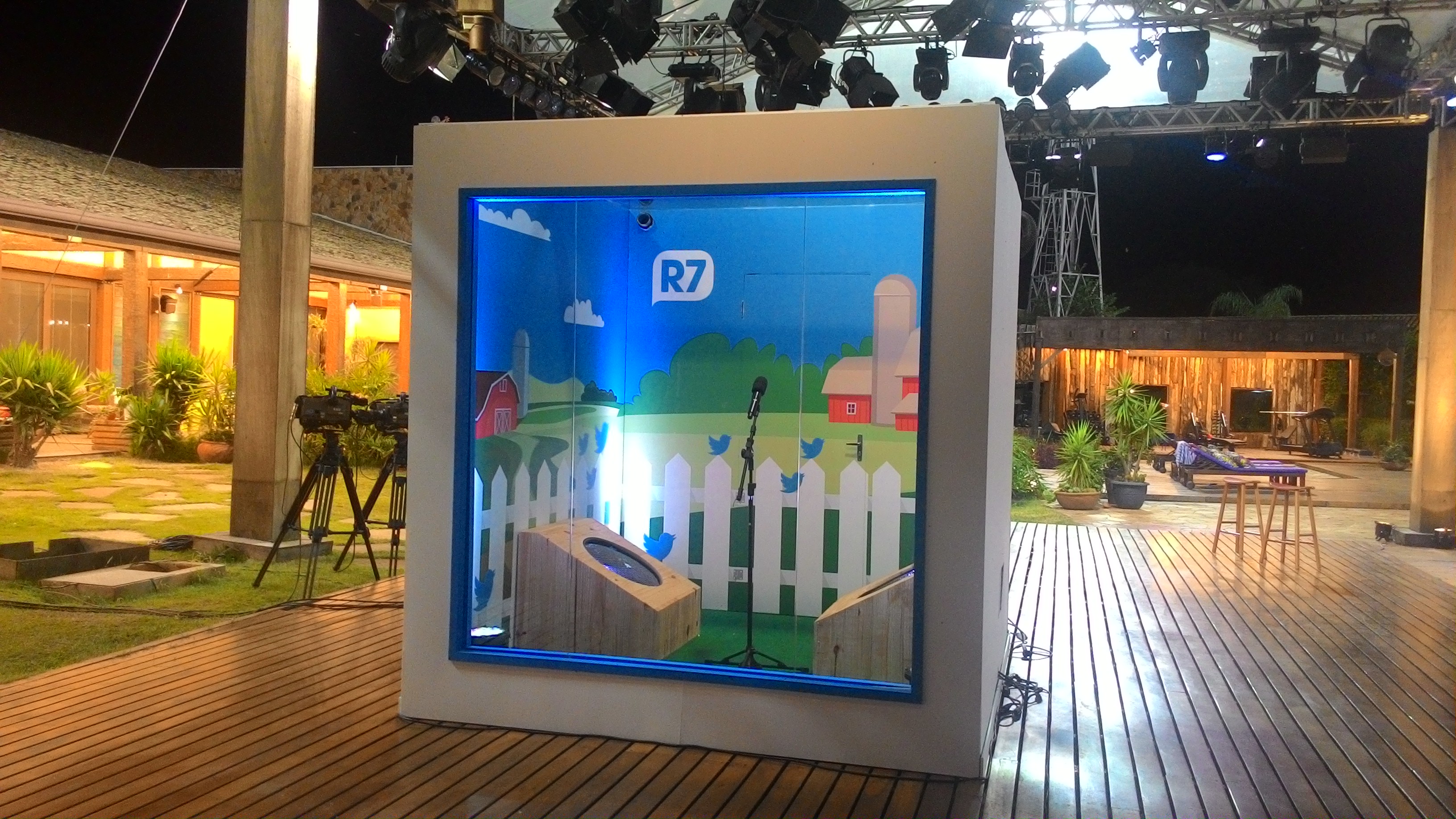 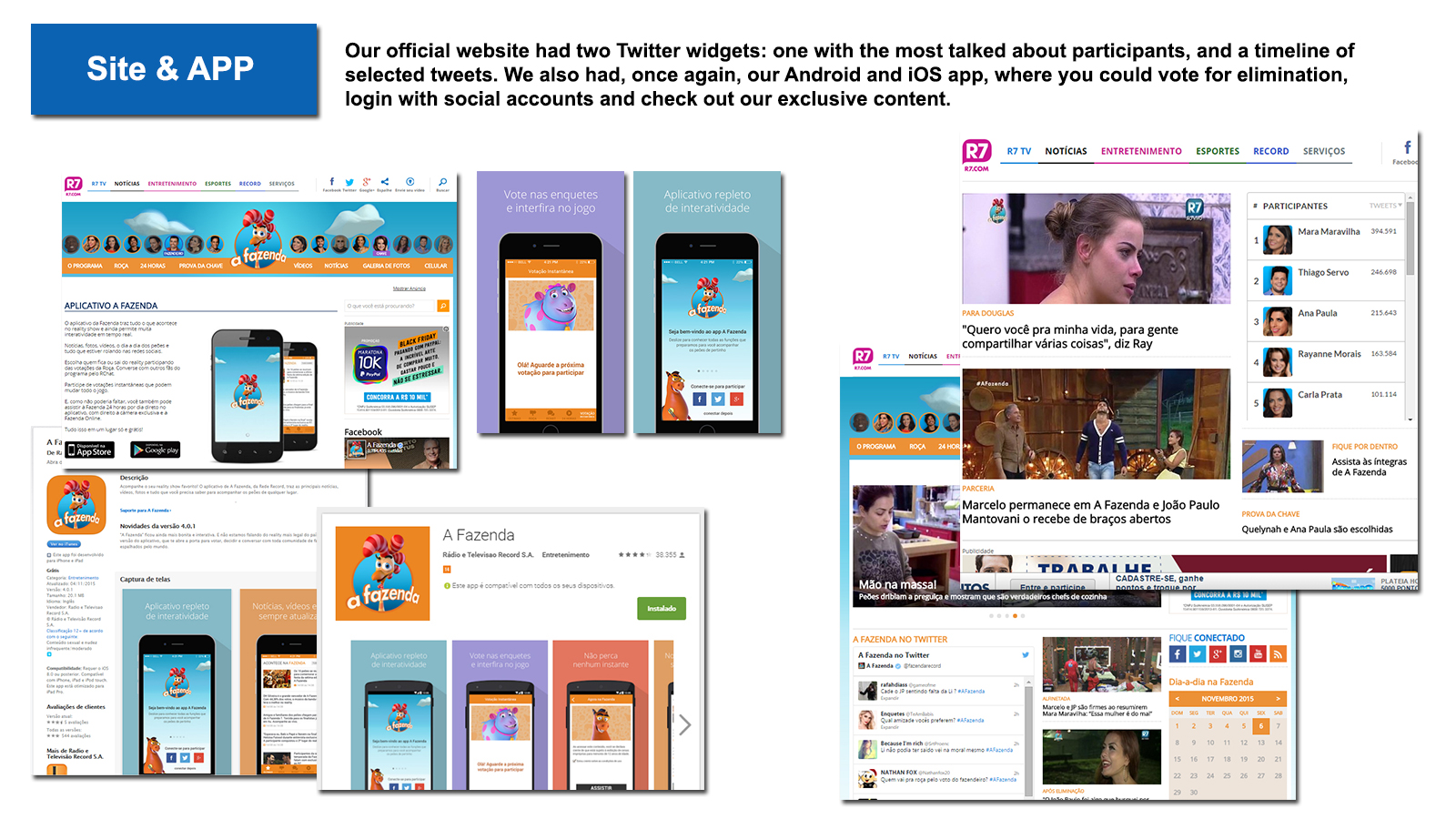 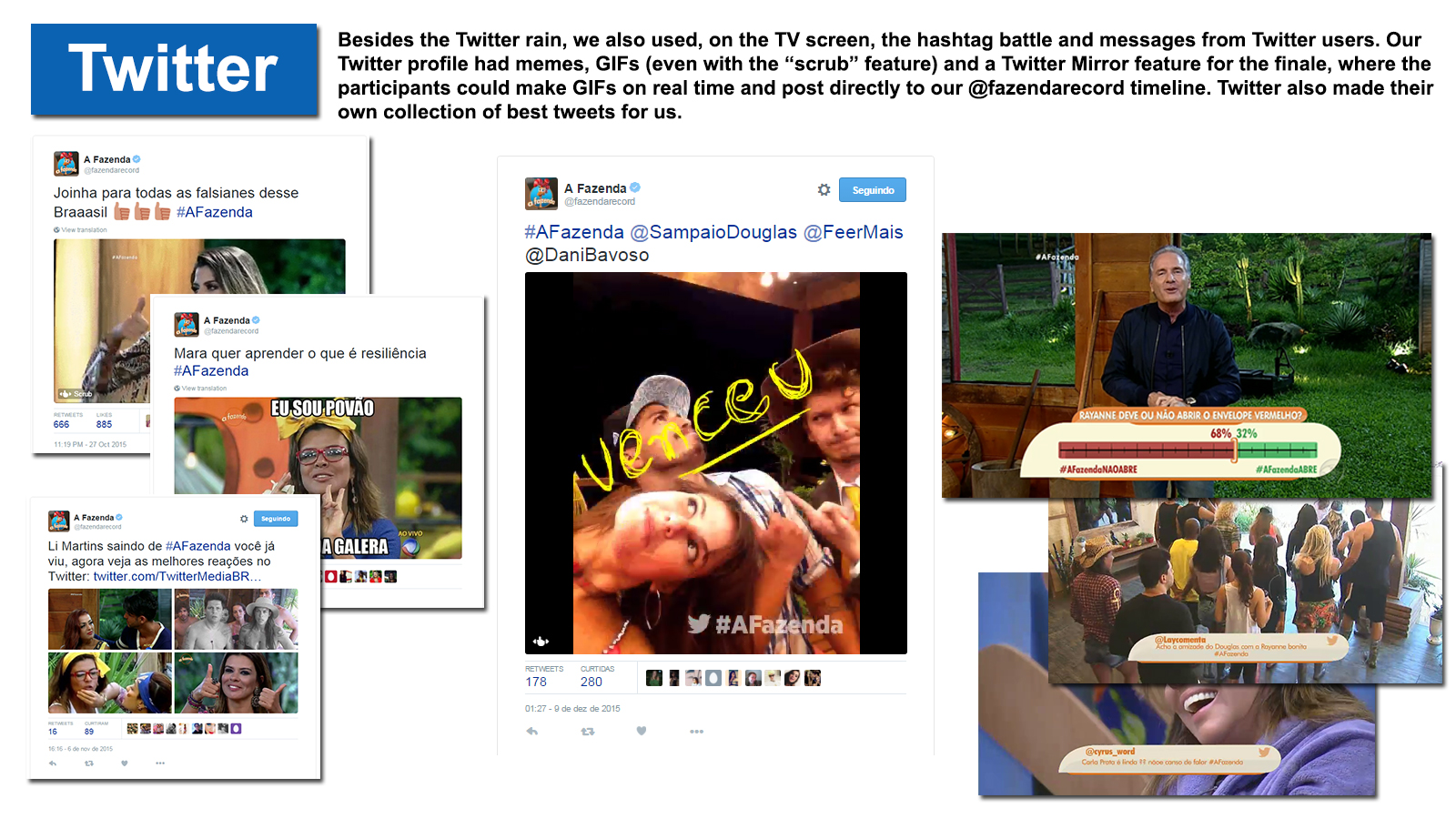