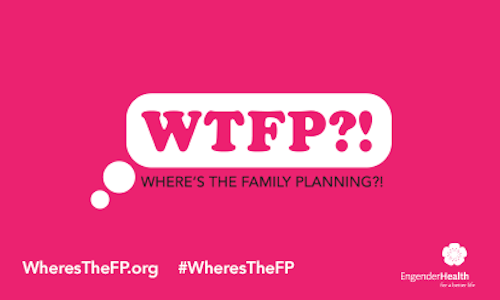 EngenderHealth launched the WTFP?! (Where's the Family Planning?!) campaign to grab the attention of American women between the ages of 25-45. In the U.S., widespread access to contraception revolutionized women's roles in the workplace and society. With access to contraception, a woman is more likely to go further in school, have healthier children, and even earn more. Yet, contraception itself – in the U.S. context – is not always viewed as a critical means to women's empowerment, as multiple generations of U.S. women have experienced widespread access.

By mobilizing U.S. women to recognize the vital role that access to contraception plays in women's empowerment internationally—and motivating them to take action to support the more than 225 million women worldwide who want access to contraception but don't have it—the campaign creates the next-generation of champions to battle a long-standing problem that, with appropriate resources and good-will, can be addressed today.

Launched in September, the first phase of the campaign focused on grabbing the attention of the target community. The original "History's Worst Contraceptives" video has received nearly 400,000 views and was also picked up by more than 65 media publications reaching the target demographic, including Time, Cosmo, Upworthy, Buzzfeed, and Jezebel, among others. The second phase, focused on engaging the audience and driving them toward action, has also achieved tremendous success with more than 67,500 new Twitter, Facebook and Pinterest followers and 23,000 signatures behind a campaign pledge. To-date WTFP?! has garnered an estimated 683,000,000 impressions across all channels.

The WTFP?! campaign deserves to win the Shorty award for Social Good Campaign based on its creativity across diverse communication channels, evidence-based strategy and messaging, employment of innovative features to attract a new generation of supporters, and of course ultimately in its headline-worthy results.

EngenderHealth is a leading global women's health organization committed to ensuring that every pregnancy is planned, every child is wanted, and every mother has the best chance at survival. As an organization with more than 70 years of experience leading the way in ensuring high-quality family planning, EngenderHealth recognizes a need for game-changing innovations to accelerate progress for women—and to engage a new generation of champions. The cheeky WTFP?! campaign was designed specifically to provide "sticky" content to achieve ongoing engagement and to attract a younger demographic.

Launched in September of 2014 during the week of World Contraception Day, the WTFP?! campaign has utilized a multi-faceted approach to amplify key messaging across earned and owned online channels. The campaign microsite WherestheFP.org serves as a home base to host digestible and shareable content, starting with the humorous and attention-grabbing "History's Worst Contraceptives" video, which walks viewers through some of the wild and ineffective methods women have attempted throughout the ages to take control of their own bodies. This video has had nearly 400,000 unique viewers and was accompanied and then followed by a social media toolkit, info-graphics, quotes from women leaders, and very soon-to-be released Video #2.

In the first six months the campaign has engaged thousands via social media (67,500 new followers on Twitter, Facebook and Pinterest), garnered more than $10,000 via a matching campaign offering $1-5 for every Tweet, Retweet, Like, Share, Post or Pin, hosted a fun-filled in-person WTFP?! race in Central Park, captured the support of Academy Award-winning actress Mira Sorvino, garnered more than 23,000 signatures in support of an original "Tell the World: Family Planning Saves Lives and Empowers Women" pledge, and even includes a tailored WTFP?! mobile application myPill® Birth Control Reminder. The campaign amplified reach through press, bloggers, and the support of EngenderHealth's sister organizations, focusing how and where to pinpoint the target demographic – earning millions of impressions in blogs, posts and press targeting the key campaign audience, such as Jezebel, Cosmo, and Upworthy.

WTFP?! is a campaign to inspire change—a bold effort from a 70-year old organization to spark excitement, change, and passion in the next generation. Its success will ultimately be measured by the awareness of young women and men to realize they can make a difference. In the words of campaign spokesperson Mira Sorvino on her experience with activism: "Everybody…can make a huge impact. But they need to combine that love and righteous anger." 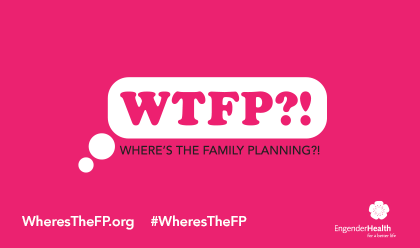 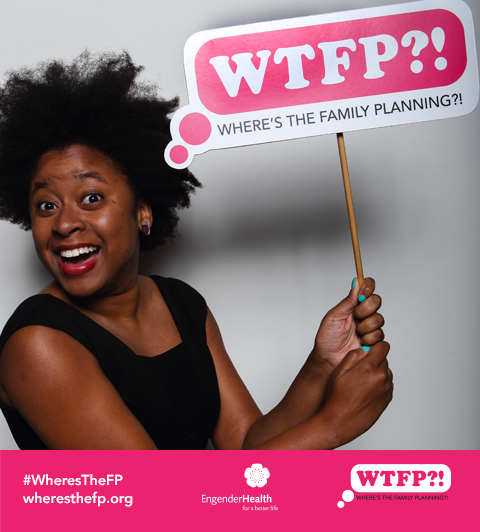 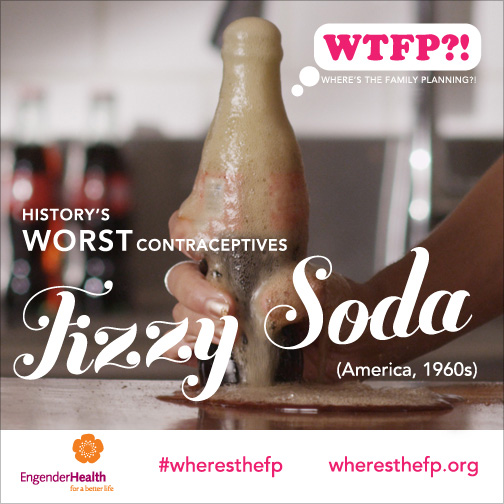 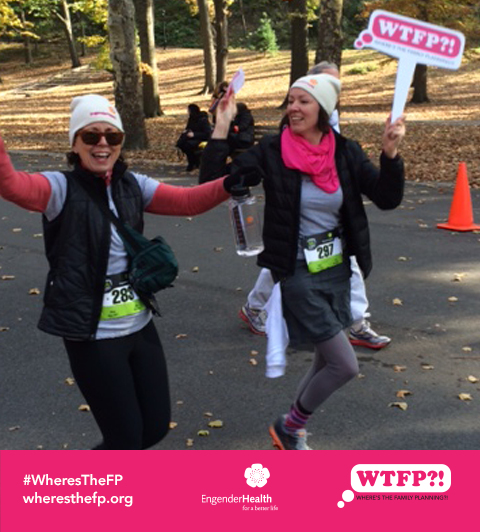