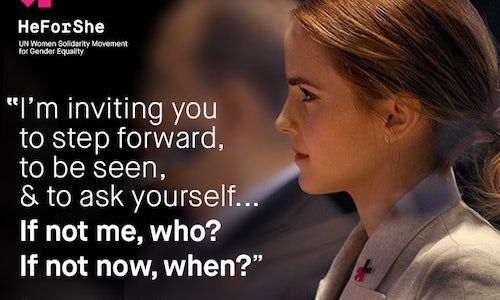 HeForShe is a solidarity movement developed by UN Women to engage men and boys as advocates and agents of change for the achievement of gender equality. The campaign launched in September 2014 with a monumental speech by Emma Watson at the United Nations, highlighting the critical role of men and boys in the quest for gender equality. The #HeForShe hashtag leveraged the speech and capitalized on the momentum of planned and spontaneous celebrity endorsements to create a global conversation around gender equality. The result was a movement of men and boys all over the world self-identifying as HeForShes and articulating why gender equality is important to them. The launch was so successful that Twitter named it as a catalytic moment of 2014 and painted the hashtag on its wall at Twitter HQ. In the span of one week more than 100,000 men and boys pledged their commitment to gender equality from nearly every country in the world. Within less than two weeks, there were 1.1 million #HeForShe tweets by more than 750,000 different users, reaching 1.2 billion unique Twitter users. Since the launch, the video of Emma Watson's speech has been viewed more than 11 million times.

Gender inequality is one of the most persistent and egregious human rights violations in the world. While much has been achieved by women's rights activists, progress has been uneven and no country has fully realized gender equality. In 2014, UN Women determined it was the optimal time to capitalize on the recognition that women's empowerment is essential for inclusive economic growth, social cohesion and social justice, environmental balance, and for progress in all spheres of life. In an unprecedented move by a women-focused organization, UN Women developed the HeForShe solidarity movement for gender equality, to call men and boys to the global movement to make gender equality a reality for all, both as advocates and stakeholders.

HeForShe has a lofty goal – to entice 1 billion men and boys to commit to gender equality. To achieve its goal, the campaign determined it would have to meet its audience in their own space, by bringing the movement to social media. As such, #HeForShe took its message to every corner of the world, using social media to better engage and reach new audiences critical to the success of its mission.

In September, 2014, HeForShe kicked off with a bang. Emma Watson, UN Women Global Goodwill Ambassador, delivered an inaugural speech at the United Nations Headquarters that became an overnight sensation. The video of the speech went viral as users around the world expressed their solidarity. Since that time, more than 11 million people have viewed the video. Within less than two weeks, there were 1.1 million #HeForShe tweets by more than 750,000 different users, reaching 1.2 billion unique Twitter users.

While many social media campaigns go viral, they rarely sustain the momentum that HeForShe has over time. Months after its wildly successful launch, HeForShe has continued to rally support from around the world and remains at the center of the conversation on gender equality. The campaign has shattered all expectations; it more than doubled its initial goal of gaining support from 100,000 men via online pledges by the end of 2014.

The #HeForShe hashtag and accompanying social media campaign have been instrumental to the continued success of the initiative. Early on, the campaign was able to capitalize on growing momentum and drive social media users to make commitments. The sophistication of its execution from the beginning has been essential; as an example, UN Women streamlined and promoted content from the campaign across all of its global accounts on Hootsuite. Over time, it has used its channels to share compelling content to stay engaged with is followers and fans and garner many new ones.

The connection between the campaign's online and offline life has also been integral to its sustainability. HeForShe has coordinated with UN Women affiliated offices around the world to bring real-world results back to social, thus repeatedly keeping followers engaged and educated on progress. Arguably most importantly, the hashtag has become a rallying cry for everyone from celebrity influencers to women and men across the world, capturing a diverse audience that feels like they're finally being heard and united under the same conversation.

With #HeForShe, everyone is given an equal voice in the discussion. No longer is the conversation regarding gender equality one-sided, or even two-sided – it is about breaking down barriers to ensure one half of humanity is working for the other half of humanity for the benefit of all. In doing so, #HeForShe has created an unprecedented movement both on- and off-line. 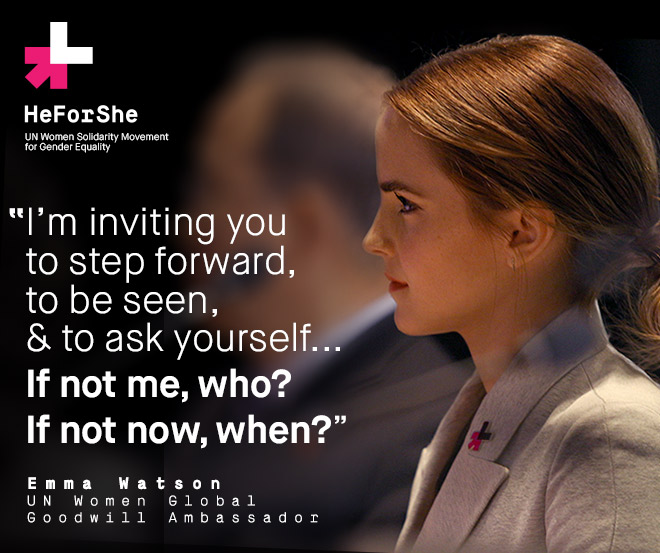