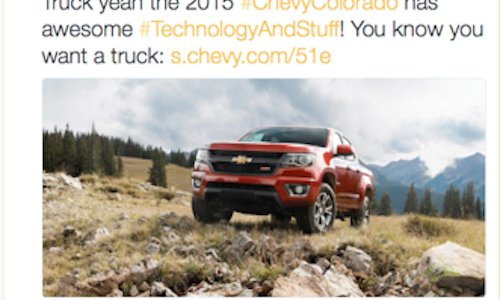 #TechnologyAndStuff: When a Strike Out Becomes a Home Run

With the emergence of real-time marketing and the colossal impact of social media, instant brand responses to both positive and negative situations are now the expectation.

We (FleishmanHillard, Chevrolet's social media agency of record) found ourselves in such a moment and turned a potential negative PR situation into a social media home run.

During the World Series MVP trophy presentation, Chevrolet representative Rikk Wilde walked to the stage to present the newly-crowned MVP with an all-new 2015 Chevrolet Colorado, nervously stumbled through his presentation, and ultimately referred to the Colorado's cutting-edge feature as "technology and stuff."

We worked with our client to assess the buzz and eventually recommend joining the conversation. We published a tweet to @ChevyTrucks with #TechnologyAndStuff and seized this unbelievable and unexpected real-time marketing opportunity.

The result was incredible. There were 23,684 social mentions garnering 62.7 million impressions the following day for both hashtags. Engagement on @ChevyTrucks nearly 300% above the channel average. The early marketing campaign release was a major success, resulting in 28,000 video views in two days, and visits to the Colorado's landing page were seven times greater than the average number of daily views.

The social exposure alone garnered an estimated $5.2 million in earned media exposure, all because we were able to capitalize on an unexpected real-time marketing opportunity…and stuff.

Often times, the most compelling marketing is done when brands are faced with two options—flight or fight—and choose the latter. Chevrolet could be a conservative brand that, in the past, may have played it safe in the face of a PR issue and missed a unique social engagement opportunity. But not this time. This time, Chevrolet chose to step up to the plate and take #TechnologyAndStuff to a level unplanned.

Chevrolet established an MLB sponsorship to tap into fans' passions by reaching them through America's most-beloved pastime. And after the 2014 World Series final—when enthusiasm was at its height—they had the exciting opportunity to present Madison Bumgarner (World Series MVP) with an all-new 2015 Chevrolet Colorado on live TV. Their representative, Rikk Wilde, stumbled throughout the presentation, and referred to the Colorado's cutting-edge features as "technology and stuff." What began as a substantial sponsorship opportunity was quickly claimed by the Internet and risked turning into a PR disaster as conversation exploded on Twitter around the #ChevyGuy and #TechnologyAndStuff.

It was time to fight instead of flee. We needed to own the moment and embrace the ensuing trending hashtags. And we needed to do it fast, because content like this would spread quickly through the Internet. The team put together a strategy for rapid integration by forming a social SWAT team response to surprise our audience. The early hour, limited resource availability, and out-of-the-box recommendation pushed the Chevrolet team out of their comfort zone, but the decision was made to break the mold with a delightfully surprising social response in the conversation's beginning stages. We intended to turn #TechnologyAndStuff into the magnetic idea leading our launch campaign and let it serve as true north for our content.

The next morning, a SWAT team assembled onsite to monitor the conversation. Though @ChevyTrucks was in its infancy stage, the creative responses and ongoing conversations leveraged the all-day trending of #TechnologyAndStuff and founded new relationships. We also created content to equip Chevrolet dealers to join the conversation nationwide.

The team worked closely with the media and creative agencies to provide recommendations to extend the opportunity into other digital mediums. The video series and media buy, scheduled to roll out weeks later, was altered to include the hashtag and launched by close of business with paid support for increased traffic.

By incorporating a theme created and celebrated by community, the creative for social and digital materials (including placements designed for the Colorado product launch originally planned for weeks later) delivered well beyond expectations. The result was an overwhelming positive sentiment towards Chevrolet and its willingness to jump into the conversation that was reflected in the 23,684 unique mentions and garnering 62.7 million impressions the following day for both hashtags. Chevy Trucks also captured over 70% of Twitter's conversation volume about trucks.

The initial tweet resulted in engagement numbers we hadn't yet seen for @ChevyTrucks including more than 168,000 impressions and an engagement rate 299% above the channel average. And visits to Colorado's webpage were seven times greater than the average number of daily views thanks to the link included in the tweet.

The early media release also performed well, resulting in 28,000 video views in two days and combined with the earned social exposure for an estimated $5.2 million in earned media exposure.

In the end, a potential crisis spurred an extremely positive sentiment towards Chevrolet. In fact, the brand was widely-recognized and applauded for its timely response and willingness to own the moment…and stuff.

Video for #TechnologyAndStuff: When a Strike Out Becomes a Home Run 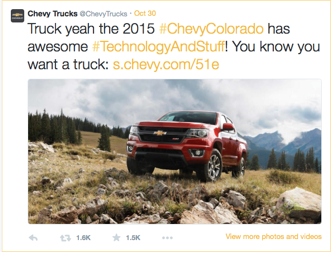