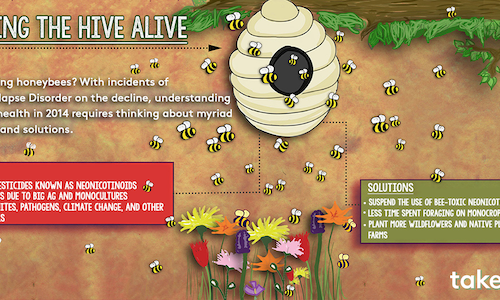 Bees are responsible for 1 in every 3 bites of food we eat. So why are we letting them die off at staggering rates? TakePart partnered with a coalition of 3 NGO's – Center for Food Safety, Beyond Pesticides and Pesticide Action Network of North America -- to create a year-long campaign dedicated to the health, well-being and restoration of the bee population at a critical moment when there's opportunity for legislative and regulatory change. The campaign seeks to:

Research: Over the past decade, there has been an alarming decline in honeybee populations around the world. Scientists agree that many factors are at play but indiscriminate use of bee-toxic pesticides is a key catalyst linked to both colony losses and overall poor bee health. Most notably, a relatively new class of systemic insecticides known as "neonicotinoids" (or "neonics" for short) is particularly damaging to bees.

Neonics are the most widely used insecticides in the world and their use has been shown to have lethal and sub-lethal effects on bees, other pollinators and beneficial insects. Neonics are persistent, water-soluble, accumulate quickly and last for long periods of time in soil and water, raising additional concerns about adverse impacts on aquatic invertebrates, birds, and other beneficial insects. Honeybees are declining at record-high rates.

A new class of systemic insecticides called neonicotinoids (or "neonics) has been found to be a main culprit in bee deaths. Beyond effects on pollinators, recent science has shown that a single kernel of corn coated with a neonic is toxic enough to kill a songbird

The EPA continues to allow the use of clothianidin, one type of neonic, over a decade after acknowledging that it had an insufficient scientific basis for allowing it in the first place. According to one scientist, "(the) EPA has not been heeding the warnings of its own toxicologists…"

Strategy: Team up with a coalition of existing experts and NGOs: Center for Food Safety, Beyond Pesticides and Pesticide Action Network of North America, to execute a campaign that, by educating people about the importance of bees and the threats that endanger the ecosystem and agricultural system, will galvanize public pressure to create sustainable regulatory change around the issue of neonic pesticide use and its toxic effects on bees.

Execution: The campaign launched a custom campaign hub housing infographics, videos, quizzes, editorial content, social media posts, live video streams of town hall discussions featuring scientists and beekeepers, with all content laddering up to a petition. The campaign was launched during National Pollinator Week in June 2014, and is ongoing at www.takepart.com/saveourbees. The campaign hashtag is #SaveOurBees.

Editorial coverage of the issues is published on TakePart.com monthly and #SaveOurBees updates are emailed to users who have signed the petition.

Two key media moments were created on live national TV via Pivot's nightly news talk show, TakePart Live hosted by Meghan McCain, Jacob Soboroff and Baratunde Thurston. There were two dedicated segments including one that featured musician/activist Moby, and Vanishing of the Bees director Maryam Heinen. Both segments boasted a live beehive in studio, and urged viewers to learn more about about the campaign and take action.

Results: Since inception of the campaign, the content has reached nearly half a million people, with the following breakdowns:

The goal of 50,000 petition signatures was reached in October, 2014, 8 months ahead of expectations.

The videos from the campaign have been viewed on TakePart.com:

The campaign shows creativity and cross-platform activation including: *A digital hub with information about the campaign and coalition of supporters, infographics, countless articles, photo galleries, videos and other content to support the effort *On-air promotion on Pivot TV's nightly news talk show, TakePart Live, with dedicated segments featuring Moby and live bees! *An interactive quiz that tests your knowledge of bees *Ongoing social media conversations including dedicated hashtag #SaveOurBees *A petition that has garnered over 50K signatures

Video for Save Our Bees 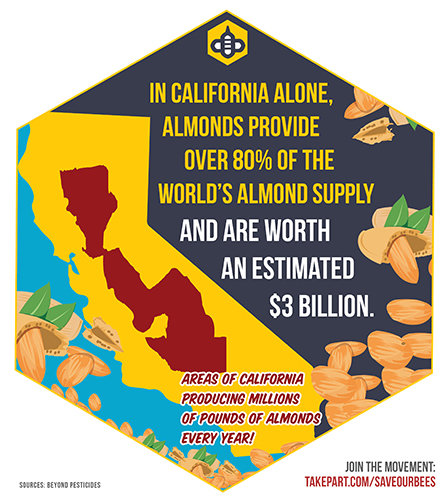 TakePart in Collaboration with Center for Food Safety, Beyond Pesticides and Pesticide Action Networ