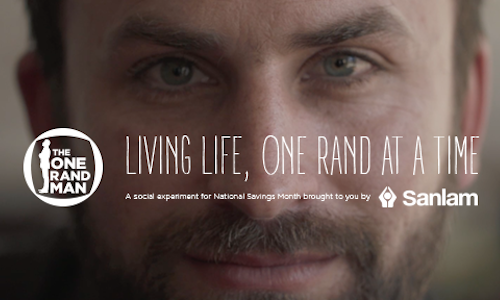 South Africans don't save. Household debt averages about 75% of their after tax income. On the first day of National Savings Month, a man suddenly appeared and took a radical step to reconnect with his money, one Rand at a time.

Introducing The One Rand Man. A social experiment where a man received his entire salary in R1 coins for the month of July. (R1 ≈ 8 US cents)

The story was told throughout the month in 5 weekly YouTube webisodes documenting his life as he paid all his expenses in R1 coins without access to any online banking or credit cards. His trials and tribulations of paying everyday expenses (in sometimes hundreds of coins) were also shared live as they happened on Twitter and Instagram. At the end of each week, experts from one of South Africa's most respected personal finance newspapers published helpful advice based on the issues he faced.

Other national and international media quickly picked up on the project with TV, radio, newspapers, magazines and online news channels sharing his story.

By the end of the month, many South Africans were inspired to rethink their attitudes towards saving and preparing for a healthy financial future.

Reconnecting an entire nation with its money is no easy task.

It's a tight-rope walk between creating something that's fun, interesting and engaging that's also relatable and authentic.

The story of One Rand Man was the solution: An everyday South African's money habits, but made fascinating with an unconventional twist.

The effect was immediate.

From first seeing his entire month's salary in R1 coins - "Is that it?" – the country was captivated. For just one month, The One Rand Man became a household name. How did he pay his rent? How did he count it? How did he carry it around? How did shopkeepers react? What does that amount of money even look like in R1 coins?

Although the novelty of his experience was interesting, and at times funny, the most important aspect of the campaign was that it successfully communicated its message: Most people aren't aware of how much money they actually have and how much they really spend. The One Rand Man's experience was something that everyday South Africans could relate to.

His exploits and financial insights lived side-by-side across social channels, where he answered questions and described his challenges in real-time.

He even inspired a few others to try their hand at paying only with physical cash.

The One Rand Man's videos were watched over 900 000 times, ranking it as the number 1 ad on YouTube in South Africa.

Most importantly, never before had so many South Africans engaged in such an accessible and frank conversation about personal finance and saving.

Video for Sanlam One Rand Man 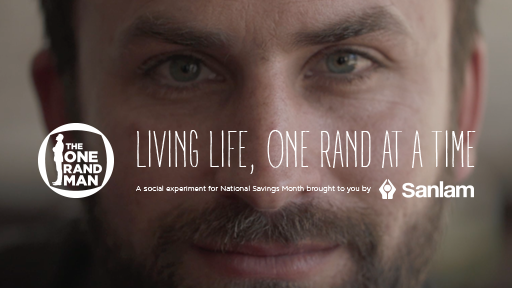