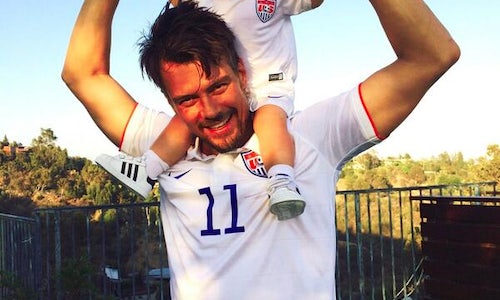 One Nation. One Team.

The World Cup presents a unique opportunity for U.S. Soccer every four years. While the team has a strong, dedicated fan base year in and year out, the Cup is a time when even casual fans – and often people with no former interest in soccer – can be persuaded to become passionate supporters of their USA team.

Reaching those fans requires more than the usual soccer-centric media outlets – and sometimes, a little star power. U.S. Soccer and FleishmanHillard worked with celebrity, sports and political influencers from a wide array of backgrounds to seed social content, utilizing their overall "One Nation. One Team." campaign in a unique way, creating a social movement and expanding their demographic in the process.

Ahead of the World Cup, U.S. Soccer and FleishmanHillard developed the umbrella theme and hashtags #OneNationOneTeam and #1N1T. U.S. Soccer and FleishmanHillard (FH) then identified key milestones during the World Cup to elevate the conversation – utilizing the first World Cup match against Ghana on June 16 as a "Digital Day," flooding Twitter, organically, with content and hashtags related to U.S. Soccer.

U.S. Soccer and FH shared this strategy with key influencers – athletes, professional sports leagues, entertainers, musicians, actors, sponsors, politicians and more – and asked them to support the team on their own social channels.

We seeded authentic U.S. Soccer jerseys to key influencers including Ryan Seacrest, Joe Biden, Tim Lincecum, Josh Duhamel and Mike Trout that included their Twitter handle on the back to share on social media.

We also created custom digital jerseys for a second tier of influencers across diverse backgrounds, including everyone from Adam Schefter to Tiffani Thiessen to Missy Elliott to Andre Iguodala, to share on their social channels the day of the first match.

And for the following three matches, we created unique hashtags for each Group of Death match (#SeeYouSunday – Portugal, #LetsDoThis – Germany and #AreYouReady – Belgium), seeding these with celebrity influencers, partnering sponsors and MLB, NFL, NBA, NHL and NCAA teams.

The response to these efforts was unprecedented. Everyone shared support for U.S. Soccer on social channels. It didn't matter if someone's social feeds were sports-centric or not – the support transcended sports. U.S. Soccer was THE topic of conversation during the World Cup in the U.S., demonstrating how professional sports leagues, artists, musicians, actors, politician, athletes, sponsors and more can work as one to amplify a social conversation.

At the start of the World Cup, we were the ones reaching out to key influencers on social. But by the end of it, the tides had turned. Social media managers for teams ranging from the San Francisco 49ers to the University of Florida Gators were asking U.S. Soccer for the newest hashtags. After the World Cup, we received numerous responses from influencers saying, "When can we do this again?" They won't have to wait long, as the 2015 FIFA Women's World Cup kicks off June 6.

Video for One Nation. One Team.